The case for (community) college 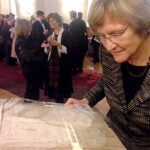 In the Civil War, roots of carnage

Projecting optimism during his State of the Union address Tuesday night, President Obama touted the nation’s recent economic turnaround and offered ideas that could help to improve “middle-class economics” for Americans, including in higher education.

Obama, J.D. ’91, proposed several initiatives, involving tax breaks for the middle and working classes and detailed a plan he had previewed earlier this month to make community college tuition-free to anyone who wants to enroll. He has long referred to community colleges as “the unsung heroes of American’s education system,” humble institutions that provide a gateway to good jobs for millions of people.

Recalling the competitive advantage the country once enjoyed as a result of the education and training provided by the G.I. Bill, the president warned that the United States has sharply fallen behind other nations in ensuring that its workers have the necessary skills for the 21st-century economy.

“We need to up our game. We need to do more,” Obama said during his 59-minute speech. “By the end of this decade, two in three job openings will require some higher education,” he said, adding, “too many bright, striving Americans are priced out of the education they need. It’s not fair to them, and it’s sure not smart for our future.”

According to the American Association of Community Colleges, 12.8 million students were enrolled at one of the nation’s 1,132 community colleges as of fall 2012. Sixty percent attended part-time; 17 percent were single parents; 12 percent had disabilities; and 36 percent were the first member of their family to attend college. In 2013-2014, the average annual tuition at public community colleges was $3,260, as compared with $8,890 at four-year public colleges.

Faust has traveled widely in speaking about the life-changing importance of a college education. “Civil rights activist Nannie Burroughs referred to education as ‘democracy’s life insurance.’ I agree,” Faust said.

Under the White House’s proposal, the federal government would provide 75 percent of the tuition for qualified students to attend community college for two years, with participating states covering the remainder. Only those students who maintain at least a 2.5 grade-point average and make demonstrable progress toward a degree or certificate program completion would qualify for the tuition break. Other financial aid, like Pell Grants, could then be used to pay for related expenses, such as books.

The plan will be included in Obama’s forthcoming budget proposal at an estimated cost of $60 billion over 10 years, with additional costs to states that participate. The initiative is expected to face stiff opposition from the new, Republican-majority Congress, which would have to approve the funding.

Katie Hinde, assistant professor in the Department of Human Evolutionary Biology at the Faculty of Arts and Sciences, said attending community college was “instrumental” in realizing her career aspirations.

“I come from poverty, and I knew my parents were never going to be able to help me out with college. They emphasized learning and education and did everything they could to help support me in the absence of economic support because they didn’t have it,” she said.

While attending a small, rural high school in Washington state, Hinde was accepted into “Running Start,” a state-run program similar to the one Obama has proposed, which provided her two years of free tuition at Seattle Central Community College. Hinde says it was there that she first discovered biological anthropology and earned credits that she later transferred to the University of Washington, where she completed her bachelor’s degree. Those early credits provided a leg up on scholarships and fellowships, she said.

“It was hugely important for me, and I was able to graduate undergrad without any debt,” which in turn allowed her to take lower-paying research posts and build vital skills without financial worry as she pursued her master’s degree and Ph.D. in anthropology at the University of California, Los Angeles (UCLA). Hinde is now a tenure-track professor.

“I think the particular fast-track path that I’ve been on was made possible by those two free years of community college,” she said.

While she supports the overarching goal behind the plan, Bridget Terry Long, Ph.D. ’00, the Saris Professor of Education and Economics and the academic dean at Harvard Graduate School of Education (HGSE), said she needs more information before deciding whether this particular program is likely to prove worthwhile.

“In some respects, I think the devil is in the details, and my opinion will depend on ultimately what’s decided. For many low-income students, community college — after financial aid — is extremely low-cost. This would take away the barrier and simplify things in a way that would increase access for them, most certainly,” she said.

While the plan makes it easier for students to find the money to attend community college, Long has some concerns about its feasibility.

“The other part of it is, for many community college students, the tuition — because it’s so cheap — isn’t really the primary cost. It’s living expenses, it’s time off from work, it’s transportation, it’s basic living expenses,” she said. “And so while this is a wonderful step in the right direction for students, for low-income workers who are facing huge challenges, there are still additional costs they’d still have to incur.”

Further, whether community college credits will fully transfer or satisfy degree requirements at all state universities is an unanswered question.

“I think this policy is wonderful for the consumer side, in that it’s kind of streamlining and saying it is possible for you to further your education. But on the institution side, you need the investments to help people sort and figure out what to take that might have value and that might lead to some better job or career or further education,” said Long. “It’s going to take both; it’s absolutely going to take both.”

What Excellent Community Colleges Do | Harvard Graduate School of Education

Josh Wyner, author of ‘What Excellent Community Colleges Do’ examines the characteristics of high performing community colleges and how they prepare all students for success.