Some child, left behind? 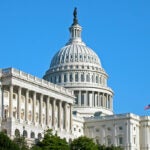 A new chapter for Congress

With congressional Republicans poised to introduce legislation to reauthorize and overhaul No Child Left Behind policies in the coming days, U.S. Secretary of Education Arne Duncan ’86 urged lawmakers Monday to repeal and replace the much-maligned 2001 federal education law.

In remarks tied to the 50th anniversary of the landmark Elementary and Secondary Education Act (ESEA) of 1965, part of President Lyndon B. Johnson’s anti-poverty and civil rights push and the progenitor of No Child Left Behind, Duncan called for legislators to correct the legacy of historic inequality in American public schools and ensure that all children are prepared for college and the modern workplace through necessary reforms, like providing high-quality preschool, while offering $2.7 billion in additional education funding.

Duncan challenged lawmakers to fix the “out-of-date, tired, and prescriptive” law without discarding some key elements, such as annual testing of students and related performance evaluations of teachers. “The days in which lawmakers support schools that are good enough for someone else’s children — but not for their own — those days must be over,” he said.

In 2013, Sen. Lamar Alexander (R-Tenn.), a former U.S. education secretary and now chairman of the Senate Committee on Health, Education, Labor, and Pensions, unsuccessfully put forward a bill to update No Child Left Behind. He has been an outspoken critic of “excessive regulation” by the federal government over public education standards and operations.

Martin West, Ph.D. ’06, an associate professor at Harvard Graduate School of Education, studies K-12 education policy and reforms. He spoke with the Gazette about the No Child Left Behind law, a cornerstone act of President George W. Bush’s administration, and the political and practical complications of revising it.

GAZETTE: What did you take away from Secretary Duncan’s remarks, and is it likely that he can shape the pending reforms given the new Republican majority in Congress?

WEST: Clearly, the speech is an attempt to lay down the [Obama] administration’s priorities with respect to the reauthorization of the Elementary and Secondary Education Act. It’s an attempt to also draw some lines in the sand with respect to changes they don’t want to see come out of Congress. The fact that he’s delivering a speech now is a reflection of the fact that the newly Republican Congress is moving very quickly toward a reauthorization bill, and this is indeed an attempt to shape that process in Congress. At this point, they have very little leverage, frankly. They may ultimately have leverage at the end of the day because if Congress is successful in passing a bill, then the president will have an opportunity to veto it. But at this point, the real action is taking place in Congress. It’s taking place largely in the Senate, where new chair Lamar Alexander needs to find a handful of Democrats to support a bill. What is striking is the extent to which the debate that’s now taking place is on a playing field that Senator Alexander and the Republicans have staked out — in the 2013 effort, but even more recently by raising the question of whether the federal government might not require as many tests as it had under No Child Left Behind, something that wasn’t considered even by the House Republicans in 2013. They’ve forced the administration to lay out as its principal priority holding the line on that front.

GAZETTE: Nearly everyone seems to agree that No Child Left Behind is a flawed piece of legislation, but disagree on the reasons why. What are some of the issues that have arisen as a result of this law?

WEST: Most people say No Child Left Behind has made something of a contribution by providing much-needed transparency about the level at which students are performing in American schools and, in particular, calling attention to gaps in achievement along lines of race, ethnicity, and class. But the chief concerns are that No Child Left Behind didn’t just provide transparency about student achievement; it also required states to establish accountability systems that sanctioned schools that were not meeting performance targets on an annual basis, and the accountability system that states were required to use was unrealistic in its expectations for the pace of improvement in student achievement. The accountability system also was based purely on the level at which students are performing rather than the amount of progress students make over time. Therefore, in many cases it did not provide a good gauge of schools’ effectiveness in improving student achievement.

GAZETTE: Has it been a failure of design or of implementation and, if so, why?

WEST: If it’s a failure, I think it’s a failure of design. The evidence would suggest that No Child Left Behind has led to modest improvements in student achievement in math that were most pronounced for low-income students and traditionally disadvantaged minorities — exactly the students whom the law was attempting to reach.

That being said, especially in recent years as the expectations for improvements in school performance under the No Child Left Behind accountability system continued to rise, you had more and more schools identified as underperforming, and you had growing evidence that the accountability system was having some unintended consequences when it came to the strategy schools were using to meet those performance targets, whether it be narrowing their curricula to focus on math and reading as opposed to other areas; engaging in excessive test preparation; or just administering too many tests as a means to try to prepare students to perform well on the state test. None of these things were required by No Child Left Behind. Many of them, I would argue, are actually counterproductive when it comes to improving student performance, even as measured by standardized tests. These things were not going on everywhere, but clearly they were happening in some places.

GAZETTE: Why is standardized testing such a contentious aspect of this law? Is it too frequent and overvalued as a metric, as teachers’ unions and others contend, and what is the right amount?

WEST: [Duncan] is saying we should maintain what No Child Left Behind currently requires, which is that students be tested in math and reading annually in grades 3 through 8 and once in high school, and that students be tested three times at least in science. That’s a total of 17 tests that states are required by the federal government to administer. I would say the evidence is increasingly clear that standardized tests in math and reading are valid indicators of student learning that matters for important adult outcomes that we all value, whether it be postsecondary educational success or employment and earnings. So it’s useful that we continue to provide information on the extent to which students are learning. Standardized tests don’t capture everything we want to know about the performance of schools and students, but without the information that they provide, we are in a much worse position when it comes to evaluating the performance of our education system.

I do think it’s important that we maintain annual testing where it’s currently required … because that’s the only way you can look at the growth in student achievement over time, from one year to the next. The growth in student achievement from one year to the next is a much better indicator of a school’s contribution to student learning than the level at which students are performing at a single point in time, which is heavily influenced by factors beyond the school’s control. This goes back to the design of the No Child Left Behind accountability system. You might ask, why did the federal government design a system in the first place that was based exclusively on the level of student performance? The answer to that is that’s all states were really in a position to do when No Child Left Behind was first enacted, because the requirements for annual testing were only implemented in the years following. They had no real alternative to using student achievement levels rather than measures of growth over time.

GAZETTE: Given that past efforts to revise the law have withered on the vine and the increasing politicization of education policy between the two parties, are there any revisions that might satisfy Democrats and Republicans?

WEST: The prospects of getting a bill through Congress are better than they have been at any point since the law was first scheduled for reauthorization in 2007 because you have unified control of Congress and because the Republicans who are interested in scaling back the federal government’s involvement in K-12 education policy are in a position to capitalize on some of the current discontent with testing. The question will ultimately come down to whether the Obama administration is willing to sign a bill that, without doubt, will not include as requirements some of the major policies that they have tried to advance through other means during the president’s time in office. One would be a requirement that states adopt teacher-evaluation systems based in part on measures of student learning. The Obama administration first encouraged states to create those systems through the “Race to the Top” grant competition. It then required states to adopt those systems in order to receive flexibility from No Child Left Behind through its state waiver program. Now the question is, should those requirements be built into the reauthorization of the Elementary and Secondary Education Act? Many Republicans in Congress support those types of teacher-evaluation systems, but they feel strongly that requiring states to adopt them from Washington is going to be counterproductive because those systems need to be designed at the local level in order to be effective.

GAZETTE: Some of the expected Republican-led changes — cutting competitive grant programs, reducing testing, and giving greater power to states to set their own achievement and accountability standards — do those undermine the goal of creating a national educational framework or baseline for all students to ensure equitability?

WEST: A greater regulation of state standards, and certainly any attempt to require states to participate in the Common Core [of standards], is another example of something you won’t see in a reauthorization bill coming out of Congress. You’ve just identified the great tension in federal education policy, which is that we know it’s very hard to get things done from Washington, that you can make states do something but you can’t always make them do it well, and that suggests the need for some caution with respect to what the federal government requires. We know that too much federal prescriptiveness may actually prevent states from innovating in ways that would be useful. On the other hand, we know that, left to their own devices, states don’t always have the best track record, especially with respect to ensuring that traditionally disadvantaged students are well served. And that calls for greater federal regulation and oversight. That’s a tension policymakers have been wrestling with since the initial passage of the initial Elementary and Secondary Education Act in 1965. The general trajectory has been toward more federal oversight and regulation, and I’m fairly confident that the next step will be in the direction of somewhat less federal involvement.