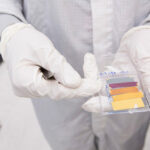 Increase has been more intense than previously understood, study says

The acceleration of global sea level change from the end of the 20th century through the last two decades has been significantly swifter than scientists thought, according to a new Harvard study.

The study, co-authored by Carling Hay, a postdoctoral fellow in the Department of Earth and Planetary Sciences (EPS), and Eric Morrow, a recent Ph.D. graduate of EPS, shows that calculations of global sea-level rise from 1900 to 1990 had been overestimated by as much as 30 percent. The report, however, confirms estimates of sea-level change since 1990, suggesting that the rate of change is increasing more rapidly than previously understood. The research is described in a Jan. 14 paper in Nature.

“What this paper shows is that sea-level acceleration over the past century has been greater than had been estimated by others,” Morrow said. “It’s a larger problem than we initially thought.”

“Scientists now believe that most of the world’s ice sheets and mountain glaciers are melting in response to rising temperatures,” Hay added. “Melting ice sheets cause global mean sea level to rise. Understanding this contribution is critical in a warming world.”

Previous estimates had placed sea-level rise at between 1.5 and 1.8 millimeters annually in the 20th century. Hay and Morrow, however, suggest that from 1901 until 1990, the figure was closer to 1.2 millimeters per year. However, everyone agrees that global sea level has risen by about 3 millimeters annually since that time.

“Another concern with this is that many efforts to project sea-level change into the future use estimates of sea level over the time period from 1900 to 1990,” Morrow said. “If we’ve been overestimating the sea-level change during that period, it means that these models are not calibrated appropriately, and that calls into question the accuracy of projections out to the end of the 21st century.”

Hay and Morrow approached the challenge of estimating sea-level rise from a new perspective.

Typically, Hay said, estimates of sea-level rise are created by dividing the world’s oceans into subregions, and gathering records from tide gauges — essentially yardsticks used to measure ocean tides — from each area. Using records that contain the most complete data, researchers average them to create sea-level estimates for each region, then average those rates to create a global estimate.

“But these simple averages aren’t representative of a true global mean value,” Hay said. “Tide gauges are located along coasts, therefore large areas of the ocean aren’t being included in these estimates. And the records that do exist commonly have large gaps.

“We know the sea level is changing for a variety of reasons,” she added. “There are ongoing effects due to the last ice age, heating and expansion of the ocean due to global warming, changes in ocean circulation, and present-day melting of land ice, all of which result in unique patterns of sea-level change. These processes combine to produce the observed global mean sea-level rise.”

The new estimates developed by Hay and Morrow grew out of a separate project aimed at modeling the physics that underpin sea-level “fingerprints.”

“What we were interested in — and remain interested in — was whether we can detect the sea-level fingerprints we predicted in our computer simulations in sea-level records,” Morrow said. “Using a global set of observations, our goal has been to infer how individual ice sheets are contributing to global sea-level rise.”

The challenge, Hay said, is that doing so requires working with “very noisy, sparse records.”

“We have to account for ice age signals, and we have to understand how ocean circulation patterns are changing and how thermal expansion is contributing to both regional patterns and the global mean. We try to correct for all those signals using our simulations and statistical methods, then look at what’s left and see if it fits with the patterns we expect to see from different ice sheets.

To the researchers’ surprise, Hay said, it quickly became clear that previous estimates of sea-level rise over most of the 20th century were too high.

“We expected that we would estimate the individual contributions, and that their sum would get us back to the 1.5 to 1.8 mm per year that other people had predicted,” Hay said. “But the math doesn’t work out that way. Unfortunately, our new lower rate of sea-level rise prior to 1990 means that the sea-level acceleration that resulted in higher rates over the last 20 years is really much larger than anyone thought.”