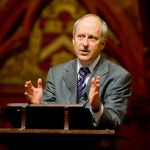 Making a case for democracy

LONDON — Is democracy about promoting equality, or ensuring accountability? Is it about representation, or popular will? Or is it about doing the right thing, even when it is unpopular?

Michael Sandel, the Anne T. and Robert M. Bass Professor of Government in Harvard’s Faculty of Arts and Sciences, led members of the United Kingdom’s House of Commons and House of Lords, along with students and members of the public, through a fast-paced, often intense discussion on Monday of these and other questions as part of “Why Democracy?,” a first-of-its-kind program held in the Speaker’s House inside Parliament. The program, broadcast Tuesday on the BBC, kicked off a yearlong celebration, organized by the BBC in collaboration with Parliament, titled “Parliament in the Making.”

This year marks the 800th anniversary of the Magna Carta (magnacarta800th.com) and the 750th anniversary of de Montfort’s Parliament. A series of events throughout this year is designed to encourage debate about the origins and the future of democracy, in the United Kingdom and around the world.

In his introduction of the program, John Bercow, Speaker of the House of Commons, hailed Sandel as a “celebrated and cerebral figure in the sphere of political philosophy,” well-known to many because of his books, the free and online distribution of his course “Justice,” and his participation in the BBC’s “public philosopher” program.

Members of both houses and various parties then squared off in debating one another and members of the public on thorny issues such as the role of money in politics, the realities and limitations of the “one man, one vote” ideal, and the differential impacts of the electoral system in England known as “first past the post,” in which the leading vote-getter wins.

The intimate setting in the ornate Speaker’s House, coupled with the face-to-face seating arrangement, created the feel of a tightly packed classroom of roughly 100 participants, with Sandel pacing in the narrow space between rows, calling on speakers. Participants hailed from many counties from southern England to Northern Ireland, and from students in their early 20s to M.P.s in their 70s, all offering impassioned — and often competing — views on the essential features of democracy, and the tension, as one M.P. put it, between “what’s fair and what works.”

In the wake of the Paris terror attacks on the staff of the humor magazine Charlie Hebdo in response to cartoons lampooning the prophet Mohammed, discussion about the importance of, and limitations on, free speech were particularly pointed. One participant argued for the need in a democracy for “the right to offend,” while another said it is irresponsible to exercise speech that can be expected to incite violence. The discussion focused on whether limitations on free speech should be considered in the context of consequences.

Though an ocean away from the chambers of the U.S. Supreme Court, the impact of the court’s ruling on the Citizens United case, which relaxed the purse strings on campaign financing, felt both a cause for concern and increasingly close to home for one M.P., who decried the influence of money on U.S. politics and what she saw as its growing influence in the U.K. Another member argued that social media was a powerful counterpunch and a great equalizer in shaping politics and popular opinion; others vigorously disagreed.

How to best reconcile the ideals of democracy with the practicalities of governing complex societies? One participant, an M.P. from Eastleigh, cautioned that it always involves compromise. “Anyone who thinks there is an ideal system,” he said, “is talking rubbish.”

To hear the full broadcast, visit the BBC Radio website.