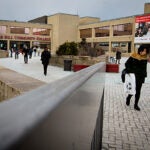 The case for (community) college

Sen. Warren, others extol to College students the value, reward of public-service work

Cautioning that “you don’t get what you don’t fight for,” U.S. Sen. Elizabeth Warren (D-Mass.) came to the Science Center Saturday to urge Harvard College students concerned about issues such as economic inequality, racial justice, and immigration reform to get off the sidelines and get into the game in such fields to make a difference.

Warren, who joined the Harvard Law School faculty 20 years ago before her election to the Senate in 2012, suggested that her life’s unusual trajectory from Oklahoma schoolteacher to one of the most powerful voices in American politics was strong proof that anyone can make a difference.

“I didn’t go to Washington to be the most popular girl in the Senate,” Warren said when asked if she and other congressional Democrats, now the minority party, intend to obstruct a Republican legislative agenda. “I went there to fight for what the people of the commonwealth of Massachusetts sent me to fight for.

“Understand this: We are losing this country. This American ideal, this notion that the daughter of a janitor could go to a school that costs $50 a semester and work hard and play by the rules and become a United States senator — those opportunities are not there for kids growing up today,” she said as part of a keynote address during “Public Interested,” a daylong conference for undergraduates thinking about careers in public service.

Now in its fourth year, the conference is a broad, collaborative effort by the Center for Public Interest Careers, the Harvard Alumni Association, the Institute of Politics, the Office of Career Services, the Office for Sustainability, the Phillips Brooks House Association, and the Public Service Network that caps off Wintersession.

“What we try to say at this conference is that there’s great privilege in being at Harvard, and we all have a responsibility to be good citizens when we graduate. There’s a lot of ways to do good in the world, but for students whose primary passion is public service, we’re committed to helping them to figure out how to follow that passion professionally,” said Gene Corbin, assistant dean of public service at Harvard College, who oversees the event.

Warren advised students to follow their hearts, but to keep their minds open to new and unexpected options.

“Don’t have such a narrow vision that when doors open that look sideways and at awkward angles that you don’t have the courage to step through them, because that is where you truly get the opportunities to make a difference,” she said.

The conference was created to address what Corbin says has been a growing interest among students to learn about and consider public service as a career. According to data from the annual senior survey, 8 percent of students planned to go into government or military service, or work at a nonprofit or nongovernmental organization (NGO) in 2014, compared with 4 percent in 2013.

Nearly 200 alumni working in 10 career tracks, including public and global health, government, public policy and military service, education and youth work, and human rights and public-interest law, spoke candidly to more than 300 students about what it’s like to work in their fields, whether students can make a living doing public-sector work and, as they approach graduation, how they can find jobs. “Public-service-work recruiting is typically less predictable and structured” than the financial services and consulting fields, and can be hard for students to effectively navigate, said Corbin.

Since the program’s inception, Corbin said, “A common refrain from alumni when they’re advising students is to talk about a willingness to take some risk — because the path is not as structured — combined with the assurance that if public service is your passion, there is a way to make a decent living and find meaningful work.”

Maribel Hernandez Rivera ’04, an immigration attorney with Immigrant Justice Corps who returned to campus to advise students curious about such work, said that when she was an undergraduate she wasn’t aware of public service as a career.

“What I remember is there was a lot of emphasis on Goldman Sachs, Morgan Stanley, McKinsey [& Co.], and I tried that,” she said. “I did it for two summers and had a great experience, but my heart wasn’t in it. I always knew I wanted to do immigration work. But I didn’t see other people going into the field, and so I kind of wondered: Is that a waste as a Harvard graduate? Somebody paid for my education. Is this how I should be spending their money — in this kind of field?”

Hernandez Rivera said Immigrant Justice Corps counts several Harvard alumni among its executive ranks and plans to hire 20 to 30 new college graduates this year. “It’s just really exciting to see that, in fact, yes, it is a good investment to use my Harvard degree to do public interest.

“I want people to know the value. It might not be monetary compensation, but it really is happiness, in feeling like ‘this is why I went to Harvard,’ to be able to use that education to help other people, just like other people helped me to get here,” she said.

Elizabeth Warren was a Radcliffe Fellow in 2001-02.