A new chapter for Congress 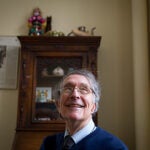 As members of the 114th Congress were sworn in this week, the thumping of the Democratic Party by the Republican Party during the midterms last November moved from theory to reality. Republicans now hold a 245-188 majority in the U.S. House, their largest margin in 80 years, and a 54-46 advantage in the U.S. Senate

On Tuesday, John Boehner (R-OH) was re-elected speaker for a third time, while new Senate Majority Leader Mitch McConnell swapped posts with Harry Reid (D-Nev.), who was demoted to minority leader. In addition to controlling the formal leadership of both houses, Republicans add seats and expand their power over nearly two dozen key congressional oversight committees, including budget, judiciary, intelligence, and appropriations.

Harvard alumni did well in the fall elections, with 40 winning office among the 52 who ran. Harvard Republicans, traditionally a smaller field than Democrats, had a banner night, taking seven of their 11 House races and all three Senate seats. But most Harvard Democrats still fared well. Of the 33 in House races, 27 won; in the Senate, three of the four Democrats running won.

Not surprisingly, most incumbents did well, and those with Harvard ties reclaimed 26 of 28 House seats and all three Senate seats up for grabs. As is usually the case, challengers were slightly less successful, winning eight of 16 races in the House and three of five races in the Senate.

They’ll have their work cut out for them. The 113th Congress ranked among the least productive legislatively in 60 years, and the 2016 presidential election ramp-up is looming.

Harvard alumni figured prominently in some of the midterm’s more dramatic and closely watched contests.

In Arizona’s 2nd Congressional District, Martha McSally, M.P.P. ’90, a combat fighter pilot and colonel in the Air Force, challenged Democratic incumbent Ron Barber, a onetime aide to now-retired Rep. Gabrielle Giffords. Barber was among those injured alongside Giffords during an assassination attempt in 2011. McSally defeated Barber by 167 votes, triggering a state-mandated recount and prompting Barber to file a lawsuit unsuccessfully challenging provisional ballots that had been disqualified. Arizona election officials declared McSally the winner on Dec. 17, the last race in the nation to be called.