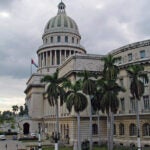 U.S.-Cuba ties: In from the cold

Though the war ended almost 40 years ago, it feels curiously current, and still draws scholars and interested students alike

The United States will soon mark the 40th anniversary of the end of the Vietnam War. A few images from the war’s last day — April 30, 1975 — remain embedded in American culture. They are largely representations of shame, waste, and defeat. A Huey helicopter perches on a Saigon rooftop while refugees line up below. At the deserted American embassy, North Vietnamese tanks burst through the front gates. On the flight deck of an aircraft carrier, sailors tip a scrapped chopper into the China Sea.

The U.S. phase of the war lasted 20 years and cost the lives of 58,220 American service members. Vietnam, Cambodia, and Laos suffered more than 3 million military and civilian deaths. Saigon (now Ho Chi Minh City), where the final helicopter fled from, is far away: 8,770 miles from Harvard Yard.

But this fall, 14 students were undeterred by time or distance. They recently finished the final exam for HIST-LIT 90ak, a seminar on the Vietnam War in American culture. They read novels, poetry, and letters. They watched Hollywood movies, pondered grave documentaries, and pored over public documents.

“The Vietnam War produced a remarkably wide array of representations,” said course instructor Steven Biel, executive director of the Mahindra Humanities Center and senior lecturer on history and literature. What drew him, in part, to teach the course, he said, was “the richness of the archive.”

The seminar was in its third iteration, and the same offering next fall will likely be the last. Biel co-taught the course first in 2011 and then again in 2012 with then-lecturer Jeanne Follansbee, a specialist in 20th century American literature. Before that, the two had teamed up for a sophomore tutorial on methods in American history. A half-semester unit on Vietnam took off like a rocket.

“The discussions were so terrific,” said Biel, that a full course was in order, creating an “inviting way for freshmen and sophomores to see what kind of interdisciplinary work we do” in history and literature. It helped that during and after the war a steady stream of poetry, fiction, films, and pop music about Vietnam continued to appear.

The young look back

In the seminar, age was a force multiplier. On average, the seminar students this fall were 19 — the same age, Biel pointed out, as the average American enlisted man who served in Vietnam. That matched a theme of the course: that the experience of teenage soldiers at the tip of the spear was central.

“We wanted to start with the grunts. These are people who were exactly their age,” said Biel, “who were thrust into a situation of extraordinary confusion, violence, and horror. It does give you a real entry point into the realm of affect. What did it feel like to fight?”

“Affect” refers to experiencing an emotional state. It is felt rather than thought. The affective realm the course meant to stimulate was not just about the American experience of the war. Students also read and watched in order to feel the effects of the war on those who fought for South and North Vietnam and the Viet Cong. They took in the suffering of civilians in the war zone as well as those left at home to powerlessly worry, and sometimes to mourn.

In “Regret to Inform,” a 1998 documentary viewed late in the semester, a Vietnamese bar girl forced into prostitution told how the tides of war swept her helplessly along. “When people decide to go to war, they wouldn’t come and ask people like me,” she said. “We were so naïve. We expected the world to love and protect us.” In the same film, a woman imprisoned by the South Vietnamese said, “The cruelty we experienced is longer than a river.”

There is power in every narrative, but Biel had a related lesson to impart, a sense that everything has to be subject to a critical eye. Of the course, he said, “We don’t look at anything as a transparent window into the war.”

When the American phase ended, Biel himself was just 14 years old. But the echoes of Vietnam were felt then, and now. One student said, “This war seems more real to me than any other.” Both her parents had been war protesters.

The power of analogies

“I don’t think this war is particularly remote,” said Biel, especially since Vietnam is still so powerful as an analogy. “That’s what draws a lot of students to the course,” he added. “Analogies are constantly being made to the Vietnam War.”

The students learn to see these descriptive parallels to present wars as both “inviting and problematic,” said Biel. “But when we talked about [Daniel] Ellsberg and ‘The Pentagon Papers,’ it was inevitable that [Edward] Snowden would come up — and the ethics of whistle-blowing.”

Not a lot of time was spent on the policy-making legacies of the war, he said, but “there is inevitably a significant amount of attention in the course to issues of culpability and responsibility,” moral quandaries that litter any battlefield, like bodies. The course also invited “questions of imperialism and self-determination,” said Biel, “those big questions that clearly resonate with students and don’t seem distant.”

A question that resonated with John Manzo ’15, an economics concentrator, was the idea of grand deceit at high levels of the government. “To read ‘The Pentagon Papers’ and to know the facts of what was being told the American people was like a punch in the gut,” he said. “I never though you could make lies on that grand a scale.”

Manzo had grown up listening to an uncle talk about his years as a protester and about one legacy of the war, a mistrust of government. Offered Manzo, “This has really made me take a second look at what he said.”

To start out, the course focused less on grand ideas and more on the experience of grunts. On the reading list was Michael Herr’s vivid and hallucinatory “Dispatches” (1977). So was Tim O’Brien’s classic view from inside a flak jacket, “The Things They Carried” (1990). “Platoon” (1986), a film written and directed by Vietnam veteran Oliver Stone, took the class inside the murk and mayhem of combat.

Manzo absorbed a related lesson, one that makes him sound like many college students — and combat soldiers — 40 years ago. “People didn’t know who the enemy was,” he said, “so everybody was.”

Presidents and policymakers and protesters were discussed, too. Students read selections from documents like “The Pentagon Papers,” from journalists like Frances FitzGerald, David Halberstam, Seymour Hersh, and Stewart Alsop, and from commentaries on the Weather Underground, about racial tensions in the military, the draft, POWs, war widows, the My Lai massacre, and the cultural function of memorials.

The students even looked further back, to a time when Vietnam was a proxy American war and not a hot, high-numbers conflict. That view is reflected in “The Quiet American,” Graham Greene’s 1955 novel about Alden Pyle, a well-meaning American naïf whose idealism is pitted against the fatalism of Thomas Fowler, a British journalist covering the war.

Students heard Greene’s story twice, the second time in the 1958 film version, whose script made Fowler not a font of rough wisdom but a dupe of the communists. Still, Greene’s unintentional prophecy about the fate of the war was preserved in both the book and film. Pyle is killed — the early embodiment of that helicopter tipped into the sea. Pyle had become, Fowler observed, a “very quiet” American.

Any war is rich territory for a course meant to examine the complex machinery of cultural history, said Biel, since “conflicts over meaning and memory” live on well after the fighting.

Some of those postwar conflicts got played out on the big screen. The students watched a string of Hollywood movies released barely after the war had ended: “Coming Home” (1978), “Apocalypse Now” (1979), and “The Deer Hunter” (1979). They were all anti-war films, though full of leavening sympathies for those who fought, and of moments of wishfully rewritten history. (In “The Deer Hunter,” Robert De Niro attempts to save villagers from a My Lai-style massacre, this one perpetrated by North Vietnamese.)

By 1985, in “Rambo: First Blood Part II,” the history of the war is not rewritten, but it is revenged: A ripped Sylvester Stallone, complete with a disco hairdo and stylish knife, rescues forgotten POWs. Meanwhile, the enemy soldiers, in a nod to the Cold War of the Reagan years, have morphed into Soviet look-alikes.

But let judgment wait, cautioned Biel. “For all their limitations, evasions, and problems, those films are attempting some kind of reconciliation to the war.”

The course’s documentary offerings attempt to get closer to the truth but still fail to evoke a totality of experience. “Hearts and Minds” (1974), “Regret To Inform” (1998), and “The Fog of War” (2004) are single chapters in a big book about the war that is still being written.

The course was only half over when Biel and Follansbee took in a late-October screening of “Hearts and Minds” at the Harvard Film Archive, in time for the documentary’s 40th anniversary. (It won an Oscar in 1975, a month before the war ended.) Among the panelists on hand was director Peter Davis, who was in Vietnam with a camera crew for seven weeks in 1972. They shot 200 hours of film that was whittled to under two hours.

Before going, Davis did little but read and watch films on the war, most of them expository. He wanted to make a film that was impressionistic instead. “I wanted to show,” said Davis, “not tell.”

His appearance, and the screening, co-sponsored by the Mahindra Center, was a gift to Biel’s course, which met once a week at the Barker Center. The panel largely ruminated on the power of the past, including Kenneth T. Young Professor of Sino-Vietnamese History Hue-Tam Ho Tai. She is the author of “The Country of Memory” (2001), about how the Vietnamese experienced the war, and she witnessed both a Vietnam at war and — as a graduate student at Harvard 40 years ago — a United States roiling with protest.

“The documentary is very powerful, was very necessary,” she said of the Davis film. “But it was done 40 years ago.”

“It’s true,” said filmmaker Robb Moss, professor of visual and environmental studies. “Documentaries always sit in time.” But the catharsis that “Hearts and Minds” created in 1974 is still possible. “The divisions were so profound,” he said. “We’re still living them today.”

Memories of another war haunt the film, and Vietnam itself, said Joseph Pellegrino University Professor Peter Galison, also a filmmaker, whose class in high school was the last to get draft cards. “Vietnam seems very much a piece of World War II,” he said, including in patriotic platitudes and even in the “bearing of the officers.” Today, added Galison, unafraid of analogies, the war “seems very present.”

That wasn’t always so, said Davis, who traveled to Vietnam after the war to find that Americans were well-liked and the conflict seemed distant. But then came 9/11 and the string of conflicts afterwards, which broke the spell of lessons learned. Once again, he said, “We flew to war on the wings of lies.”

The film, the course, and the study of history and literature itself are about investigating the power of personalities and events that are materially gone but culturally remain. At the screening, Mahindra Humanities Center Director Homi Bhabha told Davis what he might have told Biel, too: “I want to thank you for helping us not forget the past.”