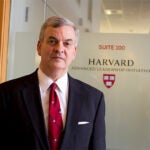 A mirror to coercion

“When a man knows he is to be hanged in a fortnight,” said Samuel Johnson, “it concentrates his mind wonderfully.” Most of us, spared such an imperative, carry on in a less-concentrated state, but it holds that of limited time, energy, and money, time is the one of which no one can muster more. Add in, as the year draws to a close, exams, papers, holiday shopping, and travel, and the demands on us multiply. If things get tight enough, an already unquiet mind suffers.

Sendhil Mullainathan, a professor of economics at Harvard, is co-author, with Eldar Shafir, of “Scarcity: The New Science of Having Less and How It Defines Our Lives,” published last year. Mullainathan says the study of scarcity “is based on the notion that you have all these unconscious processes for capturing your attention” — machinery, in a sense, that lies just below the surface (and which, incidentally, the practice of mindfulness can help us see and “get above”).

Speaking in his office at the Littauer Center, Mullainathan, a 2002 MacArthur Fellow, described the curious equation that exists between scarcity and its opposite number, abundance, and how each can skew behavior. Scarcity brings focus, which Johnson knew; not only are we better able to accomplish things (or perhaps submit equably to the gallows), but we sometimes can do so with a fillip of unexpected creativity.

Yet scarcity’s darker side, what the authors call tunneling, causes us to lose sight of less-immediate yet still important things outside the tunnel. In this context, the more we focus on red-flag tasks, the more our fluid intelligence, or “bandwidth,” is taxed, Mullainathan says, such that on our busiest days we in fact seem to be “dumber.”

Abundance, in its turn, sows laxity, the authors’ work shows, and might better have been used to build helpful buffers — if only. Strict deadlines would have gotten us moving. As the question so often goes, how did we get here? And now what?

Help lies, Mullainathan says, in learning to manage not just our time but our bandwidth relative to the tasks at hand. For example, buying presents can be done mostly with low bandwidth — except for that important, thoughtful gift; for that we actually need to be “able to be thoughtful,” he said. In sizing up our workload, it’s well to realize that busyness has two elements: hours of work, and the diversity of that work.

“Most people don’t realize how pernicious that is,” he said, referring to diversity of work, “because now what you have is lots of open threads.

“Almost everyone will nod when you say multitasking is inefficient, but no one will realize that serial tasking is just as bad. If you do Task A and switch to Task B, there’s a latency period where you find it very hard to switch.”

The brain, he added, “has all these switching costs, and some are more expensive to switch into or from. When you have diversity of things, you’re often paying lots of switching costs.”

The costs of serial tasking seem especially high for bandwidth-taxed undergraduates, who Mullainathan notes seem to take pride in doing too much. Yet the load of their perhaps even busier classmates is hard to miss, given the screens we continually gaze at, and that exposure can lead to “a lot of not being in the present” — while the most successful students are almost all defined by being “super-engaged.”

A respite from all this could be found in an unexpected state. Mullainathan says he asks people, “When was the last time you were bored — properly bored? Really, genuinely, and goodly bored?

“Boredom has enormous value,” he went on, telling of how he once waited long at the airport with his phone battery dying. “I could feel things were happening, connections were being made, random thoughts were being sewn together.” Yet we don’t let ourselves be bored — unless, he says, we’re where most of us say we are when our best ideas come: in the shower.

So, “the shower’s working,” he observed; what might be called scheduled boredom — bath time — provides just enough activity to let the mind churn away. Yet despite the welcome yield of creativity and insight, people “don’t connect the dots” to create more such opportunities. We’d rather keep busy.

And as 2014 wanes, Mullainathan warns of “the illusion of an empty calendar.”

Most people deal with their calendars as if stocking a pantry, he said — “room for a can here; there’s space there” — but the fact that a certain day is as yet unscheduled is no assurance that conflicts won’t arise — we know by experience that they will — or that we’ll be at our nimble best.

Students may think, “I have four weeks to get this paper done.” “It sounds like a lot of time,” Mullainathan said, but “you don’t have four weeks. What you have is a bunch of things that need to get done at the same time; they’re just not salient right now.”

The illusion of the distant deadline sets the stage for last-minute scrambling, which is just the mode many students claim to favor. “That’s how I work,” they say. What they’re not doing, Mullainathan said, is “matching,” putting like with like, exploiting the optimal pairing of bandwidth and activity. The “alchemy” can take place, he said, but the ingredients must line up well in advance.

By the way, he offered that writing a first draft is better done with low bandwidth; if we’re tired, inhibiting factors like second-guessing are less likely to interfere. And the classic all-nighter? Mullainathan calls this bandwidth neglect: You’re not just a little less smart at 4 a.m., he said; you’re a lot less smart. And your writing is not just bad; it’s “terrifically bad.”

“The ground has to be made fertile, and that you can’t do on deadline.”