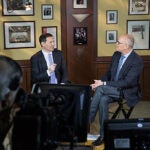 If releasing your film means potentially igniting a conflict with one of the scariest and most shadowy nations in the world, then you know you’ve got a blockbuster on your hands.

Seth Rogen isn’t surprised by the threats, nor is he fearful of retaliation from Kim Jong-un, the leader of North Korea, and the target of a fictitious assassination attempt by two bumbling journalists — played by Rogen and James Franco — in the upcoming Sony Pictures movie “The Interview.”

“I would hope North Korea has better things to do,” quipped Rogen, who along with starring in the film, co-wrote and co-directed it.

It’s possible he was wrong — some press reports have speculated on whether North Korea was behind a hack of Sony Pictures that led to several unreleased films being leaked to file-sharing websites. (“The Interview” wasn’t part of the leak, and is scheduled for a Christmas release.)

In a visit Tuesday to the Institute of Politics’ John F. Kennedy Jr. Forum, Rogen talked about the connections between politics and comedy with Alexis Wilkinson ’15, the first black female president of The Harvard Lampoon. Audience members were given passes to a post-event screening of “The Interview” at the Brattle Theatre.

The idea for the movie came out of a conversation with childhood friend and screenwriting partner Evan Goldberg, said Rogen. “We were just talking about how journalists can be in a room with these elusive people, and that if you wanted to kill someone, they’d be a good way to do it,” he said. “I’ve always been fascinated with North Korea, and the more I read about it, the more bizarre and mysterious it became. Like, what the [heck] is going on over there?”

Also on hand was “The Daily Show” co-creator Lizz Winstead, who discussed women in comedy and the genesis of the Comedy Central news satire, helmed since 1999 by Jon Stewart.

Living in New York in the summer of 1990, Winstead thought she’d be doing stand-up forever — and not particularly well.

Then came a life-altering blind date.

“The guy shows up wearing all Yankees gear. Which was a bad sign anyway, since I’m from Minnesota and a Twins fan.”

The duo landed at a screening of Fellini’s “La Dolce Vita,” which put her date to sleep.

“I took my buttery popcorn hands and smeared them on his Yankees jacket,” said Winstead.

Still, she stuck it out, agreeing to go for a drink. The TVs at the bar were broadcasting the first night of the Gulf War.

“CNN had these graphics and theme songs and hot people talking about war,” said Winstead. “And I kept thinking, are they reporting a war or trying to sell me a war?”

After that, Winstead started looking at media through a different lens, thinking about the ways news is reported. “At ‘The Daily Show’ we don’t just make fun of the news, but the way it’s presented, and the manipulation behind it,” she said.

Winstead’s latest endeavor, a social media project called Lady Parts Justice, aims to “talk about reproductive rights in ways that are fun and interesting, and get men involved, too.”

When Wilkinson pressed her about female roles in comedy, Winstead said that there’s plenty of room for improvement despite great strides in recent years. “The more you get women in positions where they’re making decisions, the roles of women will also improve.”

Rogen drew from his own work to join the conversation on gender dynamics. In recent films, he said — notably this year’s “Neighbors” — he has shifted from his early “bromances” to crafting more well-rounded characters for women.

“We unraveled conventions with ‘Neighbors,’” he said, adding that the role of Rose Byrne, as his character’s wife, was just as important as his — and that she didn’t play the passive spouse, but a funny and active co-conspirator. “I hope to do that more and more.”

At the end of the night, serious talk was cast aside.

“Do you think Hillary Clinton is more a Charlotte or a Samantha?” quizzed Wilkinson, referring to characters from “Sex and the City.” “I’ve been thinking about this a lot — and they’re opposites!”

Winstead passed, saying that she never watched the show.