It starts with education 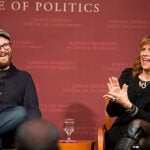 Young African-Americans must see their reflections in their communities, and have a real chance to succeed in school and society, U.S. official says

Addressing an Askwith Forum on “Closing the Gap: African-American Educational Excellence,” Johns, executive director of the White House Initiative on Educational Excellence for African Americans, challenged his audience to tackle that difficult work. He called for honesty and rigor from educators, the community, and institutions like the Harvard Graduate School of Education (HGSE).

Speaking in HGSE’s Askwith Hall on Tuesday night, Johns opened with a moment of silence for the slain Michael Brown of Ferguson, Mo., as well as other young African-American and Latino victims of violence, then dove right into the problems faced by many members of the African-American community.

“It should not be the case that in America a child’s opportunity is determined by ZIP code or genetic code,” he said, quoting a line from the initiative that both President Barack Obama and Michelle Obama have used. The program Johns leads is the newest of six such educational initiatives, he explained, describing it as “unapologetic and as intentional as we can possibly be” about leveling the playing field.

How to achieve that was the subject of his engaging 50-minute talk, which was followed by a question-and-answer period. To begin, he said, educators need to have an accurate perception of the issues faced by students of color.

“Children, especially disadvantaged children of color, are especially resilient — but they shouldn’t have to be,” he said. Discussing the hurdles faced by many students, he described poverty, hunger, and homelessness. “Children experience events that would break the average adult,” he said, asking his audience to imagine coming into school after missing a night’s sleep or even after witnessing a murder.

David Johns, executive director of the White House Initiative on Educational Excellence for African Americans, shares solutions and strategies for closing the achievement gap in communities across the country.

On Wednesday morning, about 200 Harvard students and others convened in front of University Hall in protest of the Missouri legal decision not to indict the former police officer who shot Brown dead.

In his remarks, Johns also warned his listeners about the dangers of accepting and perpetuating negative images. Illustrating his point with slides and video of often very young African-American scholars and entrepreneurs — such as Thessalonika Arzu-Embry, who received her bachelor’s degree from Chicago State University at 14, and Moziah Bridges, who founded Mo’s Bows, a handcrafted bow tie business, at age 9 — Johns said, “There are still students who show up, face those barriers, and stand out anyway.”

It also means being candid with young people and, perhaps most important, listening to them. Following a video of 11-year-old Marquis Govan testifying before the St. Louis County Council about the dearth of people of color on the police force and in other neighborhood roles, Johns noted that children are “asking us to care,” to demonstrate “that we see them, that we’re going to be honest about the mistakes that we’ve made, and that we’re going to support them.”

Focusing on the role of educators, Johns emphasized three key points. Learning, he said, starts at birth, and families must be engaged in prenatal and early childhood care. “Why are we spending all this time trying to play catch-up?” Literacy, he continued, is vital, and must be supported and encouraged within families and communities. “If I can read, then everybody I know should be able to read.”

He added that post-secondary success must be celebrated and supported “from birth.” Simply getting into a college is not enough, he stressed, and educational institutions must try harder to support students all the way to degree or certificate.

The challenges, Johns acknowledged, are vast and need to be faced on a societal level. “Imagine,” he asked his audience, “how different our country would be if we celebrated half as much the people who choose educational achievement as those who dribble balls or sing songs.”

Repeatedly, Johns returned to the role to be played by his audience — largely graduate students in education and teachers — with encouragement for their daunting task. “You all are the chosen ones,” he concluded. “Take care of yourself as you continue to do this work, because it’s not going to happen overnight. It’s valuable, and it’s essential.”