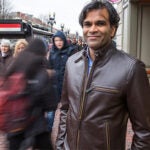 As the dark clouds over the nation’s economic future appear to be lifting, critics say the United States still needs to address a number of deeply rooted challenges to remain a leading business force on the world stage. Among the most stubborn perceived roadblocks to sustained prosperity are the country’s deteriorating transportation infrastructure, a shortfall of workers with crucial 21st-century skills, and an underperforming K-12 public education system, according to recent research from Harvard Business School (HBS).

Nearly 2,000 (1,947) HBS alumni surveyed for the “U.S. Competitiveness Project” labeled the nation’s K-12 public education system the weakest of 17 components deemed vital to the country’s long-term competitiveness, such as entrepreneurship, capital markets, and the tax code.

The project, co-authored by Michael E. Porter, the Bishop William Lawrence University Professor, and Jan Rivkin, the Bruce V. Rauner Professor of Business Administration, and published in September, is an expansive, yearly effort by HBS to identify and evaluate the ways the business community engages in key arenas that may contribute to — or undermine — the interests of American businesses and citizens.

The country’s K-12 education system lags globally as students fall further behind in literacy and numeracy rates. While the nation ranks fifth in per-pupil secondary school spending, American students rank an estimated 17th in reading, 27th in math, and 20th in science achievement, compared with peer nations in the Organization for Economic Cooperation and Development (OECD) such as Japan, Canada, and Finland, the research says.

“No one has to be convinced this is a critical problem, but there’s a lack of urgency in this country,” said Allen Grossman, a senior fellow and retired M.B.A. Class of 1957 Professor of Management Practice at HBS who led the project’s education research.

“A lot of people say it’s money, and there are certainly instances of money being the key need. But we’ve actually increased our total spending on public education in the last 30 years by 100 percent in real dollars, and what we noticed is that there’s some but very little correlation between high performance and more money,” he said. “So it’s how the money is spent.”

Grossman launched a joint venture between HBS and the Harvard Graduate School of Education (HGSE) called the Public Education Leadership Project (PELP) in 2000 that helped inform this new research. He said this is the first time that the effectiveness of business/K-12 education partnerships has been formally studied.

The lack of data measuring the quantity and quality of business’ engagement with K-12 education is a major barrier to improving and expanding such efforts, said Grossman. “We could not find virtually anything. Even when we tried to determine what is the … amount business gives away annually to education, we couldn’t find a precise number. No one had any idea.”

Grossman hopes the report will form a baseline for future analyses that HBS and other research outlets can build upon.

“The findings suggest that there is great untapped potential in the alliance between educators and business leaders. But tapping that potential will require a concerted and coordinated effort, especially to build a mutual understanding and trust between the two sectors,” the report concludes.

Grossman said the report’s reception from both business and education leaders has been “astoundingly positive” so far. For the business community, by quantifying what business is doing around K-12 public education and evaluating what works and what doesn’t, the report offers reassurance that there are valuable ways to be involved. As for educators, “They are just delighted HBS [is saying] ‘It’s urgent; it’s not ancillary to the welfare of American business; it’s key.’ So by our saying that, with the platform of Harvard, that’s important,” he said. “If not Harvard Business School, who’s going to attack this?”

Because business leaders often have enormous resources and significant political capital, they can and should play a leading role in helping reform K-12 public education, the study suggested, identifying three areas where business can be particularly useful and effective.

First, business can be a credible public advocate for the urgency of education reform. Second, it can use its “franchising” talents to help educators scale up effective programs across districts, states, or even the country. “That’s how you grow your business, but school districts don’t usually have the skill set,” said Grossman.

Lastly, business can best contribute by supporting new initiatives like “Cradle to Career” or “Collective Impact” that are now underway in nearly 60 U.S. cities and that take a holistic approach to address outside-the-classroom factors that weigh on student performance, such as social and emotional difficulties, medical issues, and hunger. “You have all of these issues, and then we’re saying to the schools, ‘You solve it,’” said Grossman. “It’s pretty impossible for them to do so. Some of them are making good progress, but it’s still very difficult.”

Businesspeople can also help by offering strategy and expertise to educators in areas like marketing and communications, data analytics, and leadership and motivation. While not every facet of business transfers to the education sector, many of the core concepts are valid and applicable.

“I think the key is it has to be a real partnership between business and the school district,” said Grossman. “If business comes in with, ‘You know, you’re really hopelessly broken and let me tell you how to do it,’ it’s not going to fly.”

Monica Higgins, M.A.’95, Ph.D. ’95, the Kathleen McCartney Professor in Education Leadership at HGSE, agrees, adding that businesspeople need to better understand the unique confines under which K-12 educators operate. “It’s a much more complicated sector than perhaps meets the eye,” she said.

“You can’t choose your customer in K-12,” said Higgins, an M.B.A. who taught at HBS for 11 years before moving to HGSE in 2007. She helped in the early framing of issues for the research, but did not work on the report. “That means that some of the traditional business models don’t apply.”

Another difference that makes partnerships more difficult is “leadership in education is about exercising influence without formal authority all the time. In K-12, because you have so many local stakeholders and constituencies: parents, school boards, site councils, local politics, etc.,” it’s much harder to reorganize because education leaders don’t have the power to implement sweeping changes on their own, said Higgins.

Even when educators identify beneficial reforms or programs, it’s difficult to implement them in other districts or to get them to work as well under different conditions. “Education is a local market business. You have different laws and regulations, different processes for hiring and firing principals. It’s very locally driven,” she said.

“With those three differences, I don’t mean to say that business shouldn’t be involved, I just say it’s an opportunity for us to be much more thoughtful about how we collaborate, and I think that level of understanding, or lack thereof, came out in the report,” said Higgins.

Getting business to design and implement new education infrastructures to help systems such as staffing and purchasing operate more effectively is one promising area of collaboration, Higgins says. “I know that it’s appealing to get very close to the kids and read to them and come in and do a service day … but there are all sorts of very interesting organization and management possibilities for solutions so that business … could actually be quite helpful,” she said. “Because we have to change the way we teach and learn, the systems supporting it have to change, too.”

Grossman conceded the naturally incremental pace of change in education is a barrier to greater participation by the business community. “This, like any major shift in public education, is long-term, hard work. And that’s part of the frustration of it” for the business community, he said. “Businesses like to come in, have a plan, a strategy, implement, and, if not a quick” turnaround, then at least a moderate one, “not 20 years. They don’t think in time frames like that. They can’t. They’re fired if they’re thinking in those time frames.”

Despite such barriers, Grossman said that significant student progress in cities like Seattle, Salt Lake City, and Buffalo, N.Y., where business and K-12 educators are working closely, gives him reason to believe that meaningful change nationally is possible.

“I’ve been in this field now for 20 years looking at public education, and I don’t think I’ve ever been as optimistic as I am today. I doubt I’m going to be around long enough to see the major changes, but I think our kids and grandchildren will.”