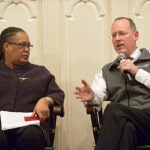 The ability to adopt new behaviors and ideas — whether learned or invented — has helped humans develop everything from stone tools and agriculture to revolutionary communications technologies like the World Wide Web. But new research shows that this ability may come with a very real cost, in an increased exposure to potentially deadly diseases.

Learning behaviors from others necessarily brings individuals, whether humans or other animals, into close contact with others, and so could drive the spread of socially transmitted diseases such as the flu, while learning through exploration and experimentation could expose individuals to previously unknown pathogens and parasites.

A new study, authored by Collin McCabe, a doctoral student in Harvard’s Department of Human Evolutionary Biology, suggests that increased exposure to disease has played an important role in the evolution of culture both in humans and in non-human primates. The study is described in a recently published paper in Proceedings of the Royal Society B.

“This is sort of a curiosity-killed-the-cat scenario,” McCabe said. “What we’re saying is that that while the ability to be a good social learner or a good innovator may evolve because it’s beneficial from a cognitive standpoint, those abilities can also lead you to expose yourself to more disease.”

To understand the cost associated with learning new behaviors, McCabe and colleagues, including Simon Reader, a professor of Biology at McGill University, and Charles Nunn, a professor in the Department of Evolutionary Anthropology at Duke University, examined data on social learning and exploratory behavior across 127 primate species, and compared it to data on the diversity of pathogens and parasites within those same species to detect associations between them.

“What we were trying to understand was what the causal relationship, if any, might be between how an animal learns and its disease burden,” McCabe said. “The question was whether animals that have more diseases are forced to come up with new solutions for coping with these infections. That idea, what we call the compensation hypothesis, takes the disease as a given and argues that behavior develops in response to diseases.

“The alternative — what we called the exposure hypothesis — suggests that animals that are more exploratory and learn more from others expose themselves to more diseases through more-frequent contact with other individuals or the environment,” McCabe continued. “That is, disease is a consequence, not a cause of behavioral flexibility.”

While the analysis included in the paper didn’t include any measures of human culture or disease, largely because it is difficult to obtain a good estimate of the full diversity of human cultural behaviors, McCabe said there is no reason why the result shouldn’t also apply to humans. “The same processes — innovation and social learning — that lead to non-human primate cultural transmission are the very building blocks of human culture.

“On one hand, I think this might be a good explanation for why we don’t see every animal inhabiting the same brainy niche that humans do,” McCabe said. “Because there are significant costs that go along with learning, and each species is equipped with varying behaviors and other coping mechanisms, it doesn’t really make sense for every animal to become a great learner.

“There’s also a good amount of irony in the fact that the same set of behaviors that allowed us to domesticate livestock and build the pyramids is also what exposed us to the sort of diseases that occur when people live in close contact and start to try new things, so this provides an interesting perspective on human evolution.”