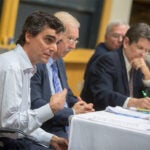 From divestment to engagement

Why do some solid students stumble on the SATs or final exams? Maybe the tests were too hard, or the teachers didn’t cover the necessary material, or the students didn’t study properly. But perhaps the ability to perform at an optimal level is undermined by anxieties triggered when people’s identities are tied to groups that society stereotypes as intellectually inferior, says esteemed social psychologist and author Claude Steele.

Steele’s theory, known as “stereotype threat,” explains a universally experienced phenomenon of “underperformance” that can occur even when smart students are, in fact, prepared, or when a white-hot spotlight withers the talented.

The threat rears its head “anytime you’re in a situation or you’re doing something for which a negative stereotype about one of your identities — your age, your race, your dialect, the region of the country you come from, your religion — is relevant to the situation you’re in, [and] you know that you could be judged in terms of that stereotype,” Steele said during an Askwith Forum at the Harvard Graduate School of Education (HGSE) Wednesday evening.

“If you care about the thing you’re doing in that situation, the prospect of being reduced to a stereotype like that can be upsetting and distracting and disturbing, and it can have a prolonged effect” on an individual’s education, career, and relationships, he added.

A renowned social scientist whose work has influenced the field of education in areas like the achievement gap, testing, and college completion, Steele is currently the executive vice chancellor and provost of the University of California, Berkeley. His talk was part of a yearlong initiative at HGSE to discuss diversity in the classroom, Dean James E. Ryan said during his introductory remarks. As part of that effort, HGSE students and faculty were asked to read over the summer Steele’s 2010 book, “Whistling Vivaldi: And Other Clues to How Stereotypes Affect Us and What We Can Do.”

Steele said his research came out of his experiences serving on a retention and recruitment panel for minority students at the University of Michigan in the late 1980s. Looking at the correlation between SAT scores and college grades for all of the university’s students, he noticed that across the spectrum of SAT scores, African-American students consistently got lower grades, deviating from the standard test score-grade correlation. This deviation was also evident with high-scoring female students and their grades in advanced math courses at the university. Steele and his colleagues wondered why.

“It happens when the preparation is the same, so there’s no skill deficiency,” he said. “Something else explains it.”

Over the next several years, Steele found that it wasn’t simply that underperforming students had internalized negative self-images that were activated under certain conditions, like tests, as the great intellectual W.E.B. Du Bois, 1890, Ph.D. 1895, first theorized in his book “The Philadelphia Negro.” Rather, said Steele, the students he studied only fell short when they deeply cared about doing well in a challenging situation. When they didn’t care, or there was no relevant stigma associated with their identity, negative stereotypes held no power, and there was little or no performance gap.

“When frustration occurs, it makes the stereotype about your group’s ability relevant as an interpretation” for why something is difficult, said Steele. “That’s when the stereotype starts to interfere with the thinking and processing that’s needed to do well on the test, and performance starts go down.”

Studies found that the biological response to worry over stereotyping looks just like the response to an actual threat. “Every single physiological measure that we can think of … has been measured: which part of the brain is active, where the attention is allocated, what’s the heart rate, what stress indicators are fired up, indicating considerable interference,” he said. “That’s a lot of attention allocated to how you should perform under pressure rather than just on the work. It takes a toll.”

Everyone experiences stereotype threat at one point or another, and “it can become a powerful force in the lives of whole groups of people, whole societies, and explains some of the patterns with achievement,” Steele said.

“It is a condition of life,” he said. “It isn’t something you can defeat and have it gone from your life. It will come back anytime you’re in a situation where the stereotype is relevant.”

Pamela Mason, Ed.D. ’75, faculty director of the language and literacy program at HGSE, asked what educators can do to remedy these threats. Steele said most schools are already doing useful things like reading books with a diversity of protagonists and images to dilute a stereotype’s potency. Besides role models, other efforts can include encouraging friendships across group boundaries and expanding students’ understanding of other worlds. And by trying to put themselves in the shoes of an underperforming student, rather than seeing only what needs fixing, teachers will gain better insight into a student’s challenges and how best to address it.

“You see that a lot of things we do as observers that are well-intended are sending a mountain of things that signal that we don’t respect that kid or think that much of that kid: ‘You can’t read, you need this.’ Just one thing after the next that you’re laying on that kid — that’s what he or she sees.” Those negative signals tell students they are deficient, that they can’t do something everyone else can do, which reinforces damaging notions and often leads to continued underperformance, he said.

To make long-term gains, Steele urges that teachers “look at what we teach, the materials we teach, look at the attitudes we use in teaching, and how that’s going to be received by the diversity of students. I think this is one of the most profound challenges that this increasingly diverse American society has to deal with, [and] I don’t think we’re sophisticated about thinking about these things in the ways that we’re going to be required to do to make real progress.”

How Stereotypes Affect Us

Claude Steele explains his research on stereotype threat and provides solutions for mitigating its negative effects.