The mission of art museums 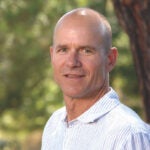 In 20 years as the director of the Museum of Fine Arts, Boston (MFA), Malcolm Rogers has often courted controversy with his enthusiastic embrace not only of new media, but of new definitions of art itself. Giving the Lowell Lecture at Emerson Hall on Thursday evening, he made the case for his wide embrace, taking a historical perspective on the mission of art museums and arguing for these institutions as resources first and foremost for the American public.

His hourlong talk, titled “Where Do We Come From? What Are We? Where Are We Going?” after the painting by Paul Gauguin in the MFA’s permanent collection, looked back to the 144-year-old museum’s original mission for both inspiration and validation. Illustrated with the occasional slide and more frequent witty quip, Rogers followed in the footsteps of such luminaries as Carl Sagan, Ken Burns, and Sissela Bok in delivering the annual lecture, which is presented by the Harvard Extension School with the Lowell Institute. The Institute, founded in 1835, is roughly contemporaneous with the MFA.

Reading from Gauguin’s writings, Rogers noted how the mural-like masterpiece whose title he had borrowed was created in a period of despair. Calling it the artist’s “suicide note,” the director saw in it a parallel for what has happened with art museums. As with the great mural, “life surges up.”

Rogers knows something about resurgence. As the longest-serving director of the MFA, he has stewarded the growth of the institution by every conceivable standard. Under his watch, the number of visitors has increased exponentially. The museum has not only overseen 375 special exhibitions and added 40,000 objects to its collection, bringing the total to more than 450,000, it has also concluded a successful $504 million capital campaign that culminated in the 2010 opening of the Art of the Americas Wing and the 2011 opening of the Linde Family Wing for Contemporary Art.

The great museum’s outlook was not always so rosy. Describing the abject state of art museums in general in the latter part of the 20th century, Rogers — a Commander of the Order of the British Empire, Chevalier des Arts et des Lettres (France), and Commendatore al Merito della Repubblica Italiana, among other honors — drew a parallel between the institutions and Gauguin at the time of his masterpiece. He described “a period of anxiety,” during which museums feared being “dumbed down” in order to survive. The result was a retreat from the public, epitomized by a desire to make museums “temples of the initiated,” rather than public resources. Museums, as he described them, were dying.

The solution he championed was found in the MFA’s original mission: to “make art accessible for the greatest number of people,” as he described it. With a slide, Rogers highlighted the “welcome” sign that hung over the museum’s original Copley Square building.

To fulfill this duty, Rogers has made some bold moves. Some of his special exhibitions — notably those devoted to fashion photographer Herb Ritts and to both automobiles and guitars — have been derided by critics and many of his curatorial and academic colleagues. In his talk, he reveled in the validation of time: The Getty has since purchased a collection of Ritts’ work, he pointed out, while the Smithsonian has held a hugely popular exhibition on the video game, seemingly following the MFA’s — and Rogers’ — lead.

“Museums are not fragile,” he said on Thursday. “They flourish in the caring hands of those who seek to make a difference.”

In the spirit of that Gauguin masterpiece, Rogers then looked to the future. That is when the relatively easy acceptance of contemporary art will complicate museums’ callings as they seek to balance the new with the old. “Contemporary art must not be allowed, like a giant cuckoo, to push old art out of the nest,” he cautioned. Not that the institutions can stop assessing, appraising, and acquiring. “Museums,” he stressed, “must be the advocates of beauty wherever it is found.”

Moving forward, Rogers said, museums must continue to be accessible while they actively welcome the public, through human interaction — new programs and visitor-resource centers — as well as through social media, multimedia guides, and an active online presence. The very buildings themselves can reach out, he noted, showing slides of how floor-to-ceiling windows in parts of the new MFA construction allow passersby to see in. “As they may do in the Harvard Art Museums, I’m delighted to say,” he added in his one mention of the opening readying across Quincy Street.

The desired result, he concluded, remains the same: that in all museums, “all our visitors are invited to take part in a uniquely powerful experience — the art experience.”