The man with the ‘golden ear’ 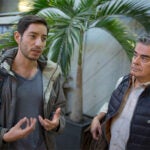 It’s not often that Harvard Law School Dean Martha Minow gets rattled. But then, it’s not every day that Clive Davis, the legendary record label executive, producer, and talent nurturer, stops by Wasserstein Hall to reminisce about his illustrious, six-decade career in the music industry.

“I have interviewed Supreme Court justices, I’ve been with presidents of countries, I am so nervous!” Minow told Davis, LL.B. ’56, Friday afternoon as they chatted about Davis’ improbable journey as a poor Jewish kid from Brooklyn who made it to Harvard Law School (HLS) on a scholarship and went on to become one of the most successful and revered figures in music business history.

“I had no clue that music would be part of my life,” Davis said. “When you have no money, when you get by on scholarships, your work ethic becomes part of it — the fear that if you don’t maintain a certain average you’ll lose your scholarship just creates the drive, the determination, the scared necessity” to constantly push to get ahead in school and then in one’s career.

Now chief creative officer at Sony Music Entertainment, Davis, 82, is perhaps the last of the larger-than-life star-makers who once ran the record business. Starting at Columbia Records in the early 1960s, then with Arista Records in the 1970s into the ’90s, and finally, J Records in the 2000s, Davis made his name as a shrewd negotiator who was blessed with “golden ears” for identifying hits and grooming future superstars. The winner of five Grammys, including the Grammy Trustees Lifetime Achievement award, Davis is among the few nonperformers to be inducted into the Rock & Roll Hall of Fame.

Davis joined Columbia Records’ legal staff just a few years after graduating with honors from HLS. Among his early tasks was to inform the label’s prickly, young folk singer Bob Dylan that lyrics to his “Talkin’ John Birch Paranoid Blues,” equating the ultraconservative anti-Communist group with Nazism, were potentially libelous and needed to be rewritten. Dylan, who famously stormed off “The Ed Sullivan Show” set after being told he couldn’t perform the song on live television, refused. Fearing a lawsuit, Columbia yanked the song from his just-shipped album, “The Freewheelin’ Bob Dylan,” and replacing it with four new tracks, including the future classics “Masters of War” and “Girl From the North Country.” When Dylan tried to void his recording contract not long after, claiming he had been underage when he signed it, Davis successfully kept the headstrong musician from bolting to a competitor.

Shortly after rising from general counsel to president in 1967, Davis transformed the stodgy Columbia, known then for its roster of “easy listening” artists like Johnny Mathis, Andy Williams, and Barbra Streisand and its catalogue of Broadway show tunes, into a rock powerhouse, corralling unknowns including Janis Joplin, Santana, Sly Stone and later, Pink Floyd, Bruce Springsteen, Billy Joel, and Aerosmith, among others, into the Columbia stable.

After his controversial 1973 firing, Davis headed the newly created Arista Records in 1974, promptly rekindling his reputation for finding pop hit-makers such as Barry Manilow, Carly Simon, and Hall and Oates, while still attracting and supporting edgier, less-commercial artists like Patti Smith and Lou Reed. For every Kenny G or Milli Vanilli the label put out in the 1980s, Arista took chances with unconventional acts like Eurythmics and smartly anticipated the growing popularity of country music by establishing a Nashville outpost and signing Brad Paisley, Alan Jackson, and Brooks & Dunn, among others.

But Davis was probably best known to the public for his exclusive Grammy parties and his role as consigliore to A-list divas like Aretha Franklin, Dionne Warwick, and the late Whitney Houston, whom he discovered in 1983.

In 2000, Davis formed J Records after being forced into retirement by executives at BMG, Arista’s parent company. It was at J that Davis helped revive the careers of Carlos Santana and Rod Stewart while inking up-and-comers like Alicia Keys, Maroon 5, Carrie Underwood, and Kelly Clarkson.

Davis, who will appear on NBC’s “The Voice” this week, just finished producing a new release from Franklin and a DVD of Whitney Houston’s best live performances, both out this month.

“I do get great pleasure in finding those great talents and showing how long a career can last,” Davis said of his knack for identifying hit songs and helping extend a fading talent’s livelihood. “It doesn’t have to be ephemeral in any way.”

With many more HLS students preparing for careers in the arts, business, or as entrepreneurs, Minow asked Davis for his advice to future graduates thinking about these fields. “I really felt the Law School training, on top of the previous education I had, was invaluable to me. The combination of making you think, where you can’t just memorize, and the need for an unrelenting work ethic” at HLS serves everyone well, he said, whether they intend to practice law or to move into business.

Davis said streaming music services like Spotify and Pandora pay billions in licensing fees that help to offset the decline in retail music sales, but cautions it’s “too soon” to know what will result from singer Taylor Swift’s recent boycott of Spotify. “The concept of music being free is abhorrent, it’s wrong. The idea that creativity should not be rewarded is so antithetical to our culture. It’s robbing creative people of what their talent deserves in compensation for that.”

One thing is sure, though. While “technology does make certain products obsolete,” he said, there’s no truth to the notion that “music is less important in our lives today than it was before.”

“That is not the case,” Davis said. “The heartening thing is music is as important as ever.”