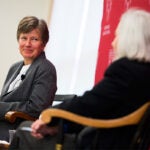 Republicans scored a significant victory on Election Night, winning control of the Senate and extending their majority in the House. The results could be seen as a referendum on GOP policies, but also as a rebuke to President Obama. David King, a senior lecturer in public policy, provided his perspective on the outcome in a Harvard Kennedy School (HKS) interview.

HKS: What message did the voters send Tuesday night? Which issues resonated the loudest?

KING: I was surprised by the size of the Republican wave on Tuesday; if we think of Congress as a ship, the thing has been rocking wildly side-to-side.

President Obama had strong majorities in Congress after the 2008 election. Then voters sent Democrats home in 2010 as the Tea Party wing of the Republican Party swept into Congress. In 2012 the voters repudiated Republicans across the board and returned President Obama to the White House. And now this — voters must have seasickness.

I do not think there were substantive issues that resonated loudly. Yes, there was fear in the air — an anxiousness about ISIS and Ebola and the economy — but the bell that rang loudest had an anti-Obama clapper.

Maybe we should stop calling these “midterm” elections and talk about short-term elections, because the American voter does not seem to have a long-term sense of where the country should be going or how we should get there.

HKS: What do the Republicans hope to accomplish with control of both the House and Senate for the first time since 2006?

KING: It will be difficult for either party to enact major changes, because Democrats in the Senate are perfectly capable of stopping bills from passing. Procedurally, it is unlikely that President Obama will be signing many Republican “stand-alone” bills, and he’ll be ready to use his veto pen. So the most likely path forward for Republicans will be to tack “policy” bills onto a handful of must-pass spending bills. This is possible because non-germane pieces of legislation are allowed to be amended onto spending bills in the Senate — but not in the House. If Alabama’s Richard Shelby becomes the next chairman of the Senate Appropriations Committee — and that’s likely — then he will be in an especially strong position to control the fate of legislation.

There will be some easy wins. President Obama likes the Trans-Pacific Partnership free-trade agreement. Senate Democrats got in the way last year, and it should be much easier with Republicans in charge of the Senate.

HKS: How can and should the president work with Congress in his final two years in office? Is there any common ground on which to compromise on major policy issues?

KING: President Obama has shown little capacity to compromise. He did not seem to like the U.S. Congress even when he was a member of it, and he has kept his own party leadership at arm’s length for six years. That is unlikely to change. Instead, President Obama will issue executive orders with abandon and attach signing statements to bills that he does sign. He will almost certainly work to support and defend his signature accomplishment — health care reform — while giving the program more time to work. The economy is getting stronger. Health care reform — as long as it’s not called “Obamacare” — has been much more popular than most people expected, and at this stage the president may want to take care of his legacy.

HKS: How do yesterday’s results affect the ground rules for the 2016 election?

KING: This election was a harbinger of big money — for both parties — flowing into campaigns. More than $4 billion was spent on the Congressional elections alone, much of it from non-candidate groups, and that will look like chump change two years from now. That would not be a bad thing if the money were spent on strategies to increase turnout across the board, but negative advertising diminishes turnout among moderate voters, alienates young voters, and rallies the core supporters of the parties.

HKS: Any other thoughts to offer on the election?

KING: We need to remember that political parties and candidates are not in the business of promoting or protecting democracy. They use democratic rules and institutions to get power, certainly, but candidates live in fear of mobilizing the “wrong” voters. Frankly, democracy is too important to be left up to the parties and the candidates. We need to encourage better people to run at all levels of government. We need to do all that we can to balance the power of big money with the power of big ideas.