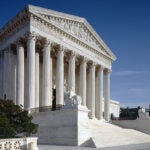 Obamacare, back on trial

Considered one of the most important American diplomats of the 20th century, onetime Secretary of State Henry Kissinger visited the Harvard Law School (HLS) campus last week to share some of the lessons learned as adviser to Presidents Richard Nixon and Gerald Ford.

A key architect of U.S. foreign policy between 1969 and 1977 and a proponent of realpolitik, Kissinger reflected on his long career with HLS Professor Robert H. Mnookin, Harvard Business School Professor James Sebenius, and Harvard Kennedy School Professor Nick Burns during an afternoon session in crowded Austin Hall on Nov. 6.

Kissinger ’50, A.M. ’52, Ph.D. ’54, and a former Harvard professor, was instrumental in setting the stage for Nixon’s historic 1972 visit to China that established formal relations between the two powers for the first time in 23 years. But the early secret meetings with Chinese premier Zhou Enlai before Nixon’s arrival involved another type of diplomatic dance. Kissinger said he made sure to avoid meeting directly with Chinese leader Mao Zedong.

“My overwhelming concern was not to meet Mao on the first trip, because security advisers survive with the good will of the president, and I knew that Nixon had his heart set on being the first person to meet Mao. … I contrived everything I could never to be even close to asking to meet Mao because I knew my life in Washington.”

Kissinger called Mao a “dominant personality” who didn’t negotiate but set a direction during talks.

“Once he said to me: ‘You Americans remind me of swallows who, when a storm approaches, fly up into the air and flap your wings. But you and I, professor, know that the flapping of the wings does not affect the coming of the storm.’ So there was always a menacing tone in it.”

Kissinger said that many observers observed the simultaneous talks with China and the Soviet Union during the Cold War as an effort by the United States to “do something with China that annoys Russia and for which we can bargain.”

Instead, Kissinger said the triangular relationship was “in itself a form of pressure on each of them, and we carefully maneuvered so we would try to be closer to each than they were to each other. One way we achieved that was by rather carefully informing each side what we were doing with the other, so that created its own pressures, but we added no threat.”

Kissinger, who was first national security adviser and then head of the State Department under Nixon, also was preoccupied in his early years with the long and unpopular Vietnam War. He won the Nobel Peace Prize in 1973 for helping bring about a cease-fire.

He pioneered the term “shuttle diplomacy,” which described his frequent trips among Israel, Egypt, and Syria as he helped negotiate an end to the Yom Kippur War that same year. But he told the crowd that the tactic only works if all interested parties have already reached some kind of a basic accord.

Don’t do shuttle diplomacy, he said, “unless you are putting fine points on an agreement.”

The origins of his détente policy, an appeasement strategy between the Soviet Union and the United States in the early 1970s, came from his increasing understanding of the threat of nuclear war.

“The more one studied the nuclear issue, the more one had to come to the conviction that a nuclear war would be of a magnitude that it would destroy civilized life. … On the other side, if you make this a national policy, you were inviting those who were willing to threaten … to dominate the world.

“I always believed there had to be a balance with respect to nuclear forces,” said Kissinger, adding that “we tried to draw the Soviets into a discussion on arms control.”

Kissinger’s former student and current Douglas Dillon Professor of Government Graham Allison asked about the premise of Kissinger’s new book, “World Order,” which examines the globe’s international order and what the political landscape might look like in the next 50 years. Kissinger answered that the last five wars involving American troops have failed to achieve U.S. aims.

The Korean and Vietnam wars, the first Gulf war, and the wars in Iraq and Afghanistan all began with bipartisan support, said Kissinger. But Korea ended in a stalemate that strategically benefited China, while the rest “we withdrew from.”

“I would say it as a general proposition … we should not enter wars whose end we cannot ascribe and for which we have no defined strategy.”

Using that same rationale, Kissinger said he declined to back U.S. military intervention in Syria.

“Yes, terrible things are going on, but tell me how it’s going to end? And are you willing to do the things that are needed to sustain the ending? … When you have a certain responsibility for world order … you must be willing to pay a price for it. But you must know what the price is before you start.”

Answering a question from a student about how Cambodia might have avoided being drawn into the Vietnam War, Kissinger, who along with Nixon was criticized for U.S. bombing raids over that country, defended the air strikes, saying they were limited to a “narrow area.” The North Vietnamese army had four divisions along the Cambodian border and was launching raids into South Vietnam against Americans forces, he said.

“If the North Vietnamese had not had troops, from (an area) where they killed Americans, it never would have crossed anybody’s mind to attack Cambodia,” said Kissinger. The North Vietnamese expanded the war into Cambodia, he said, and that was the tragedy.