Incarceration in the U.S. is big business 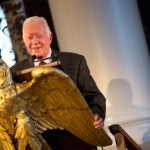 Harvard alum returns to talk about ‘The Criminal Injustice System’

There are 2.3 million people incarcerated in the United States, a larger incarceration rate than any other country in the world. Incarceration has turned into big business, with the government spending more than $80 billion a year on prisons.

So it comes as no surprise that those who push back on that paradigm often face massive challenges. One of those people is Bryan Stevenson, this week’s guest on PolicyCast. Stevenson, a Harvard Kennedy School and Harvard Law School graduate and executive director of the Equal Justice Initiative, was described recently by Archbishop Desmond Tutu as “America’s young Nelson Mandela.” He’s the author of “Just Mercy,” a story of justice and redemption.

HKS alumnus Bryan Stevenson has spent his career working to address issues of racial and wealth inequality in the United States’ justice system. Stevenson’s work as executive director of the Equal Justice Initiative focuses on defending those without the means to properly defend themselves.