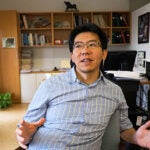 They have been a scourge for thousands of years, responsible for the spread of lethal diseases such as malaria and dengue fever, and, much less urgently, a threat to barbecues around the globe.

What if there was a way to render humans invisible to mosquitoes?

The notion isn’t as far-fetched as it might sound, say researchers who have identified a key genetic variation that helps mosquitoes “smell” humans. The study, which is described in a Nov. 13 paper in Nature, could open the door to new strategies to ward off the pesky insects.

The work was led by Leslie B. Vosshall at Rockefeller University in New York and Carolyn McBride, an assistant professor at Princeton. Felix Baier, now a graduate student in the Department of Molecular and Cellular Biology at Harvard, was also part of the team.

“What’s emerging from this is a picture of exactly how mosquitoes are navigating their environment to locate humans, and in the end, we may able to use that knowledge to fine-tune a line of attack that distracts their preference for humans altogether,” Baier said.

The gene researchers identified, Or4, encodes for receptors that detect sulcatone, a compound emitted at unusually high levels by humans. By varying the sensitivity and expression level of that gene, Baier said, ancient mosquitoes were able to zero in on a new food source — humans.

As recently as 100,000 years ago, mosquitoes fed exclusively on animals, largely because there simply weren’t enough humans to make them worth targeting. But as humans spread around the globe, mosquitoes followed, hungrily.

While animal- and human-preferring mosquitoes have diverged over thousands of years, the two can still be interbred, a fact Baier and colleagues exploited to examine how their genomes differ.

“What we did first was to take the two different types of mosquito and look at their antennae, which is their most important smell organ,” Baier said. “We reasoned that there should be differences in the number and type of genes that are expressed there, and that was true. We found a huge list of genes that differed in their expression between the two types of mosquitoes — 959 in all.”

To pare the list, Baier and colleagues bred the two types of mosquitoes to create hybrids, then bred the hybrids to create a second generation.

The team reduced the original pool of nearly 1,000 possibilities down to just 46, a list far more manageable, but still too large to identify candidate genes for further study.

By identifying genes that were different in similar ways in both the parental and the hybrid strains, the team was able to produce a list of just 14 genes that might be responsible for helping mosquitoes identify humans. The team then cut the list even further by looking at the identity of those genes — and found that two of them encoded odorant receptors.

“We felt that odorant receptors in the antennae were the most likely to underlie this behavioral difference, because changing the input to the system is an easy way to change the behavior,” Baier said. “We then decided to look more deeply into one gene because it was very highly expressed — in fact, it was the second most highly-expressed odorant receptor in the antenna of human-preferring mosquitoes overall.”

With their target identified, the team set about finding what the odorant receptor detects. The process is relatively simple in fruit flies, Baier said: Researchers bombard the insect with various compounds while monitoring the activity of particular neurons. When the receptors detect certain compounds, they cause neurons to fire. By tracking those neural patterns, researchers can determine which compounds the receptors detect.

“But because these are mosquitoes and not model organisms like the fruit fly, we had to use a different strategy,” Baier said. That strategy was to transplant the Or4 gene from the mosquito into fruit flies, and then record their neural activity as they were confronted with different molecules.

“Humans emit it much more than any of the other animals we tested,” Baier said. “And that makes sense — it’s something a mosquito could use to distinguish between human and other mammals.”

The researchers said it could be possible to interrupt the process somehow, whether by attacking the genetic pathway or developing a compound that binds to the sulcatone receptors. Doing so would effectively render mosquitoes “blind” to humans.

“Obviously, doing that is not trivial, but this opens the possibility of looking into it,” Baier said. “Of course, mosquitoes would still be able to locate humans through other cues, but they would probably have a harder time to prefer biting humans. The importance of this is that we’re learning more about the architecture of the olfactory system in mosquitoes in general, and how that mediates the recognition of humans.”