Helping Albania break with the past 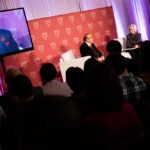 The man with the ‘golden ear’

Leading a nation long considered a model of economic dysfunction, Prime Minister Edi Rama of Albania has pushed for change since his election last year. And the change needed in his country is not the electioneering “change” promised by virtually everyone in U.S. politics, but sweeping reforms that remodel institutions and foster the economic revival taking hold oh-so-slowly in the former communist nation.

“We have … the youngest government in the history of Albania,” Rama said during a recent visit to Harvard. “My choice was to have ministers who have never been ministers.”

He added, “In politics, experience is what kills innovation and reform.”

But Albania isn’t relying on youth alone. Rama’s government is in the midst of a two-year project, funded by the Open Society Foundations, that partners it with Ricardo Hausmann, a professor of the practice of economic development at Harvard Kennedy School, and with experts at the School’s Center for International Development (CID), which Hausmann directs.

“Their findings are helping us structure or restructure sectors or subsectors,” said Arben Ahmetaj, Albania’s minister of economic development, trade, and entrepreneurship. “We feel lucky, but the cooperation goes beyond traditional consultancy. It’s a partnership [for] development.”

For decades, Hausmann said, Albania was a European version of North Korea, isolated from the rest of the world under the dictator Enver Hoxha. After the fall of communism in 1992, the nation made a difficult transition to capitalism, marked by a proliferation of pyramid schemes whose collapse led to unrest in 1996 and 1997.

“There’s no reason in the world that the country shouldn’t have a per capita income like Greece or Italy except for the fact it’s been mismanaged for 60 years,” Hausmann said.

With the Harvard-Albania project just past the halfway point, Ahmetaj and Rama see progress — analyses performed, reforms under way, and a 26 percent rise in exports.

“It’s absolutely a fascinating and unique experience,” Rama said, “very much based on knowledge, innovation, dialogue, and — first and foremost — working together. It’s not experts on one side and pupils that have to follow on the other. It’s about … results.”

While it’s not unusual for Harvard faculty members to advise or even serve in government, the depth of the relationship in this case is striking, said Elaine Papoulias, executive director of the Minda de Gunzburg Center for European Studies and a former director of the Kennedy School’s Kokkalis Program on Southeastern and East-Central Europe.

Papoulias said the CID project with Albania is an extension of a relationship between Rama and Harvard that reaches back to the early 2000s, when Rama was mayor of the national capital, Tirana. A onetime artist who had lived for years in Paris, as mayor Rama demonstrated a flair for the dramatic. He painted drab downtown buildings pink, yellow, and green, and took aim at the problem of rampant illegal development, reclaiming land for the city and encouraging green spaces. He was a Time magazine European hero in 2005.

Rama’s first visit to Harvard was in 2003, when he was invited by Papoulias and the Kokkalis Program to participate in a mayors’ lecture series. The invitation stemmed largely from her observation of Rama’s “unique” and “authentic” leadership style, Papoulias said, one that set him apart from the region’s other political leaders.

“His leadership was an ethos that was not only new for Albania, but for all of the region, a region … that had too many leaders who desired only to produce followers,” Papoulias said.

Rama soon started thinking about the kind of technical expertise Albania needed, and began pushing talented young leaders to participate in HKS executive education programs, both in Cambridge and in Greece. Today, Papoulias said, a quarter of Rama’s cabinet has some sort of Harvard training.

With Rama’s election to prime minister, the time seemed right for a more formal relationship between his country and the University. Backed by the Open Society Foundations, Hausmann began a two-year project aimed at institutional and economic reform.

“HKS became active in Southeastern Europe starting in the late ’90s — a formative moment for this region,” Papoulias said. “The CID project in Albania is an evolution and deepening of Harvard’s involvement in this region, and demonstrates how impactful being at the right place at the right time in a country’s developmental trajectory can be.”

Hausmann, former planning minister for Venezuela, former chief economist for the Inter-American Development Bank, and an expert on developing economies, started the initiative with a trip to Albania to talk to government officials about priorities, and to examine growth challenges and opportunities.

An early priority was assisting in negotiations with the International Monetary Fund, which in February approved $457 million to help Albania meet its financial obligations while it undertakes reform. Hausmann also secured a World Bank grant so that six of the country’s ministers could attend an executive education program at HKS that month.

“The moment they got back they started to implement ideas they got in the course,” Hausmann said.

In the summer, Hausmann sent Kennedy School students to Albania for eight- to 10-week internships at ministries. The students examined issues ranging from the value chain of agricultural exports to the stalled implementation of industrial park legislation. Associate Professor of Public Policy Matt Andrews, who guided some of the students, also directed the formation of problem-solving “black belt” teams in agriculture, industrial zones, light manufacturing, and tourism.

Boban Paul, a master’s student in public administration, worked in the Ministry of Agriculture with two other students. The trio focused on the value chain of agricultural products, analyzing how a plant or animal gains value before it is offered for sale.

The students then developed a series of recommendations for three products (tomatoes, poultry, and sage). Paul, who worked with sage, suggested setting up a quality-control lab as well as measures to bring home some production currently done abroad, such as processing and bottling the leaves.

“That to me was a good learning experience,” Paul said. “It’s not easy to make policies.”

He Tian, who worked on the Ministry of Economics’ black-belt team on industrial parks, was among those tasked with figuring out why existing policy had gone wrong. Six years ago, the government passed laws to create nine industrial zones in the country, not one of which is operational today.

The team dug into the dysfunction, demonstrating in one case the harmful role of illegal development. To make matters worse, the land had been sold by the local government, Tian said, providing a stark illustration of what can happen when the goals of central and local governments are poorly aligned.

The lessons have not been restricted to students.

“I cannot tell you how much I’m learning, how much I’m thinking about Albania,” Hausmann said. “Things are much clearer to understand when they are in the extreme and Albania is an extreme case in many things.”

“We’re seeing an interesting increase in economic growth, but it’s a fragile trend and we’re working hard to consolidate it,” Ahmetaj said. He added that as he looks ahead to the project’s conclusion, “We will do our best not to let Ricardo, CID, and Harvard go away from Albania.”