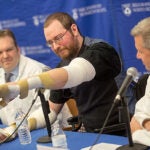 The first round of chemotherapy did little to suppress Ron Bose’s leukemia. The second round, with 10 times the dose, knocked the proliferating blast cells down, but only by half.

That’s when his physician, David Steensma, used a new test developed by a team at the Harvard-affiliated Dana-Farber/Brigham and Women’s Cancer Center that provides a tumor’s molecular profile, checking samples for 95 specific genes often mutated in blood cancers.

The results indicated that Bose, 70, of Pawcatuck, Conn., had acute myeloid leukemia that contained a rare mutation that Steensma matched to an experimental drug developed by the Cambridge-based pharmaceutical company Agios. By November, after several months on the drug with few side effects, Bose’s blast cell levels had fallen significantly, to a point where he said he not only feels better, but he’s also a potential candidate for a bone-marrow transplant.

The test, called a Rapid Heme Panel, was developed by a team that was led by Harvard Medical School Professor of Pathology Jon Aster, a physician at Brigham and Women’s Hospital.

The test, Aster said, builds on work done by the Profile research project at the Dana-Farber/Brigham and Women’s Cancer Center. That project, which focuses on solid tumors, scans tumor samples for 305 gene mutations found in all types of cancers.

The Rapid Heme Panel was designed not for research, however, but for patient care. Previous clinical tests often took weeks to return results and were limited to a small number of possible mutations. The new test can return results within days.

“The nice thing about a panel like this is you get a whole bunch of mutations all at once, including ones you may not have thought to send,” Steensma said.

The new test helps in a couple of ways, said Steeensma, an associate professor of medicine at Dana-Farber Cancer Institute. It can identify specific conditions in cases where the diagnosis is ambiguous. It can help physicians determine a patient’s prognosis and course of treatment, and it can quickly identify whether a patient is a candidate for an experimental treatment designed to attack specific genes. In Bose’s case, for example, his leukemia was determined to have the IDH2 mutation, which is targeted by Agios’ AG-221 drug.

The Rapid Heme Panel is the natural outgrowth of information-rich times, Aster and Steensma said. With genetic analysis allowing physicians to identify tumors not just by cancer type — blood, lung, breast, brain — but also by individual genetic makeup. With drug companies searching for treatments targeting specific genetic vulnerabilities, a way is needed to guide physicians and patients through an increasing number of diagnosis and treatment options.

The Rapid Heme Panel went into use in August and has been operating at close to capacity — 42 samples per week — since, Aster said. Aster said the test’s developers are continuing to evaluate it to ensure the best mix of genes is represented.

“This is really the way of the future,” Steensma said. “We are going to be practicing medicine not based on how cells look under the microscope, but rather on what makes a disease tick.”