From protests to power plays 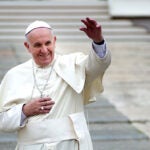 Slowly, shifts at the Vatican

A year ago, few observers could have foreseen that a loosely organized demonstration in Kiev’s Independence Square would escalate into what some view today as the greatest destabilizing threat facing Western Europe since the end of World War II: the Russia-Ukraine conflict.

Last November, Ukrainian protestors were initially angered at then-President Viktor Yanukovych for scuttling a trade deal with Europe. The protests quickly turned violent, sparking a national uprising known as the Maidan Revolution that led to Yanukovych’s ouster in February. It also provided a pretext for Russian President Vladimir Putin to arm pro-Moscow “rebels” in Ukraine and begin military “exercises” in the region that culminated in Russia’s seizure of Crimea in March. Despite widespread condemnation from leaders in the European Union (EU) and the United States, the dispute continues as tensions between Russia and Ukraine appear to be reigniting after a brief cease-fire.

U.S. Vice President Joseph Biden met with top Ukrainian officials in Kiev on Friday to mark the anniversary of violent protests that led to the overthrow of Yanukovych. There, Biden criticized Russia’s incursion into Ukraine territories and warned that it would face “rising costs and greater isolation” if it did not withdraw its “illegal military formations, military equipment, and militants.” So far, the United States has offered the Ukrainian government help with military equipment and tools, but not arms.

Radoslaw Sikorski, speaker of Poland’s parliament and a vocal critic of Putin, addressed the diverging fortunes of Poland and Ukraine since the collapse of communism for an event Nov. 20 co-sponsored by the Minda de Gunzburg Center for European Studies at Harvard and the Harvard Ukrainian Research Institute. From 2007 until September, Sikorski was Poland’s foreign minister and a key figure in diplomatic efforts to resolve the conflict. He spoke with the Gazette about the crisis and about thwarting Putin’s expansionism.

GAZETTE: Despite the Sept. 5 cease-fire, Russia has restarted shelling and is moving tanks, artillery, and air defense systems into Ukraine, even as it continues to deny any involvement. Vice President Biden, who was just in Ukraine, said the annexation of Crimea is unacceptable. Where do things stand right now?

SIKORSKI: I don’t want to report on current events because I don’t follow them hourly, but Ukraine has had two rounds of democratic elections. It has a democratically elected president now, and the Maidan Revolution has now been legitimized by a parliamentary election. So hopefully now they can have a pro-European and pro-reform majority, which hopefully means that they’ll start serious reforms.

GAZETTE: What is the mood in Poland, and what have been the political and economic effects of this conflict thus far?

SIKORSKI: Poland is affected far more proportionately than most European countries, let alone the United States, because trade with Russia [and] with Ukraine is a much bigger proportion of our trade. But we feel keenly that changing our borders by force in Europe should not stand, and that what’s happened is a very serious breach of the peace in Europe. And we are also worried about our Western credibility when documents such as the Budapest Declaration memorandum, which guaranteed Ukraine’s integrity, is being breached. We feel that the stakes in Ukraine are very high and go way beyond Ukraine itself.

GAZETTE: Have the sanctions, the freezing of assets, the public condemnations, and other measures taken by the EU and the U.S. been effective? And if not, what else should be done to halt or reverse Russian forces?

SIKORSKI: They would have been much more effective if they’d been implemented six months earlier, but I think President Putin himself in Brisbane [Australia] admitted that they are having an effect. But the trouble with sanctions is that usually they work, so to speak, in the medium term, whereas we need to influence Russian behavior in the short term. And the primary way in which we should do that is to recognize that the security of the eastern flank of NATO is now endangered, that militarily the eastern flank was neglected for 15 years, and it’s high time to redress that. … And now that Russia is annexing territories by force, it really is high time to start exercising, to start prepositioning equipment.

We should always give Russia the opportunity to change course, to return to international cooperation, to respect international law. But we should also deter Russia from going further. That requires a mix of military deterrence, sanctions, and playing to our strengths, namely showing the attractiveness of our model of development, and persuading the Russian people that self-isolation doesn’t serve their interests.

GAZETTE: What about Ukraine? How do you rate its response to this crisis thus far?

SIKORSKI: President Yanukovych left the country disorganized. He “stole” on a heroic scale. The army and security services are in disarray. And it’s very difficult to conduct elections, manage a gas crisis, manage an insurgency and a confrontation with a more powerful neighbor all at the same time. But I believe that President [Petro] Poroshenko and Prime Minister [Arseniy] Yatsenyuk are the best team that Ukraine can possibly have right now, and I wish them well.

SIKORSKI: Poroshenko is a man who has the capacity for dialogue both with Russia and with the West, and he’s respected in both places. And Prime Minister Yatsenyuk, I know him well, has a clear vision as to what needs to be done. But, of course, you need the politics to enable you to do it. Ukraine now, I hope, after the presidential and parliamentary election, will now have a period without elections and a period of national consolidation in response to foreign invasion, a period of extraordinary politics that should be used quickly to implement reforms, painful reforms that are sometimes difficult to carry out in ordinary times.

GAZETTE: Poland’s Deputy Prime Minister Tomasz Siemoniak told the Associated Press that this conflict represents “the biggest crisis of security since the Cold War.” Do you agree, and how do other EU leaders view the situation?

SIKORSKI: Some thousands of people have already died in this conflict, and large chunks of territory have been, by force, annexed by a neighboring country. So yes, when borders are changed by force in Europe again for the first time since World War II, it’s very serious. Of course, we realize that other countries have different perspectives on it, but we’ve managed to arrive at the sanctions unanimously.

GAZETTE: Do you feel there’s more consensus now than, say, six months ago?

SIKORKSI: Oh, definitely. People who were hoping this was some kind of misunderstanding with President Putin are disappointed that he is not listening to their arguments.

GAZETTE: What do you think Putin wants? What are his long-range ambitions, and what will it take to stop him from realizing them? Is there any diplomatic strategy that might work?

SIKORSKI: I think he’s told us very frankly what he wants. I encourage your readers to read his March annexation speech of Crimea, where it’s all laid out. He has given himself the right to intervene wherever there are Russians or Russian speakers, and wherever Russia ever historically held sway. That’s a very ambitious goal. If other countries proclaimed such doctrines — the United Kingdom; Mongolia, which once held the largest empire ever, from Korea to Poland; even Poland — we would be in deep trouble, because all borders in Europe are artificial in the sense that they are the outcome of historical disputes and accidents, and we’ve learned to manage problems of minorities and ethnic and linguistic rights across borders without changing them. We wish Russia would also live by the principles that she’s voluntarily subscribed to by joining the Council of Europe … the U.N.

Diplomacy will work when we show enough strength, not just economic but also military, in intelligence, in the confrontation of the media apparatuses, so that he regains respect for us. We need to show our willingness to stand up for our own interests.

GAZETTE: Are you concerned about the support Putin seems to be finding among countries like Hungary, Slovakia, Bulgaria, and Serbia? Does that suggest his pathway into Central Europe?

SIKORSKI: Putinism is an attractive ideology. It’s an ideology that resists globalization, resists European integration, resists cultural and sexual revolution, and is an ideology of national action. That’s very attractive for many people — not for the majority, thank God — but for many people, particularly on the fringes in Europe, both on the left and the right fringes. And these fringe groups are getting support, which is why President Putin has been quite successful in what he tries to do. I think it’s to do with attractive business propositions. And what would, I think, change [that] would be more American leadership in Europe.

GAZETTE: What would that consist of?

SIKORSKI: The times in which the U.S. would continue to draw down forces in Europe, perhaps those times should be over. Add them [put forces] where they are actually needed, because you have U.S. bases in Italy, in the U.K., in Spain, in all those places that are secure, and you don’t have them in countries that feel threatened.

GAZETTE: You were quoted last month in Politico magazine as saying that in 2008 Putin had proposed dividing up Ukraine with Poland, but then later you disavowed those remarks. Can you clarify what Putin said, or what you meant?

SIKORSKI: It was an anecdote, which got radically over-interpreted.

GAZETTE: In that same piece, you described the annexation of Crimea as a significant milestone in Putin’s effort to centralize his power in Russia. Why has it been so important to his regime?

SIKORSKI: The annexation of Crimea, because it was bloodless and relatively cost-free, was popular in Russia, and no doubt reinforced President Putin’s authority within the power structures, just like any success reinforces the authority of the chief executive.

GAZETTE: So the lack of reaction from the West [was a problem]?

SIKORKSI: And from Ukraine. Ukraine didn’t fight in Crimea. Now that Ukraine is fighting back in the eastern Ukraine, the policy is criticized.

GAZETTE: Any sense of where this crisis will be in the next year?

SIKORSKI: I know where I’d like us to be, which is Russia respecting its international commitments, stopping to interfere in Ukraine, and going back to full cooperation both with Ukraine, with which it has many common interests — for example in the area of gas, the area of space technology, in the area of arms industry, and also with Europe. Poland will be the first country to extend a hand of friendship as soon as Russia stops invading countries. Invading is perhaps too strong a word — destabilizing countries.

The interview has been lightly edited for length and clarity.