From divestment to engagement 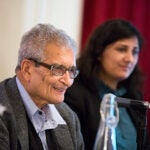 The threat to Burma’s minorities

Ours is the only generation that will have a chance to take meaningful action on climate change, a Harvard Business School (HBS) panelist said yesterday. The question is: What action will we take?

The panelists at HBS’ Hawes Hall examined strategies for investors concerned about climate change and seeking to influence corporate behavior on the issue. Options ranged from outright divestment of stock in fossil-fuel companies, to major investors pushing to to put climate change on company agendas, to blocking corporate action such as supporting climate-change denial, and even to replacing board members who are recalcitrant on the issue.

Several panelists agreed that the real arena in which action on climate change must occur is the halls of government. Rebecca Henderson, the John and Natty McArthur University Professor and the event’s host, said the issue could be addressed relatively easily with government-instituted global prices on carbon, but there are massive hurdles to getting agreement on that.

“It is in everyone[’s] … interest to have everyone else do something,” Henderson said. “It’s a massive social-action problem.”

Absent government action, Henderson said, some critics seek divestment of stocks in fossil-fuel companies as a way to pressure them into action, while others argue that by divesting, investors lose their leverage as stockholders to influence corporate behavior.

“This debate seems to me to be very topical, and one of the things that Harvard can do is to have a conversation on this,” Henderson said.

The panel included Joshua Coval, the Jay O. Light Professor of Business Administration; Chris Davis, director of investor programs at CERES and chief of staff of the Investor Network on Climate Risk; Bob Massie, co-founder of the Global Reporting Initiative and a divestment activist; Timothy Smith, director of ESG shareholder engagement at Walden Asset Management, and Robert Zevin, founder of Zevin Asset Management. The event was sponsored by the HBS Business & Environment Initiative, the HBS Finance Club, and the HBS Energy and Environment Club.

Kicking off the discussion, Coval said the evidence is pretty clear that divestment of stock exerts little, if any, economic pressure on a company to change its behavior. Even a spectacularly successful divestment campaign would involve only a fraction of a company’s shareholders, and there would likely be many other companies and individuals willing to buy the divested shares, he said. A study of the divestment campaign aimed at companies doing business in South Africa during apartheid found that the companies themselves were not hurt.

It “found no impact whatsoever. Surprising, but ultimately a pretty convincing study to me,” Coval said.

But divestment can work in other ways than by leveraging economic pressure, Massie said. It affects the broader societal debate, which he said is an important factor since there has been a political failure to address the issue as well as a market failure in pricing climate-change risks into corporate stock prices. It is also a moral issue for institutions and individuals, he said.

Fossil fuel companies, he said, have reserves more than four times the amount that can be burned if global warming is to be limited to 2 degrees centigrade and catastrophic effects avoided. Not only that, the companies are spending significant amounts annually to search for more, Massie said. From an economic standpoint, an argument can be made that stocks are incorrectly priced because of that, and that exploration dollars ought to be invested elsewhere or returned to shareholders, Massie said.

“Companies are clearly betting that governments will do nothing,” Massie said. “This is the largest crisis in the history of humanity. … In addition to the fundamental financial issue, there’s a fundamental moral issue. You’re getting money from companies whose business model is to destroy the planet.”

Smith works with shareholders who have pursued both strategies of divestment — which can be done with little loss of return, he said — and have tried corporate engagement on the issue. He said that can be an effective strategy, particularly when major investors are involved. Investors can push companies to use more renewable energy, increase their usage efficiency, and alter their lobbying and advocacy efforts.

Still other investors with whom Smith has worked take a middle strategy, such as divesting in coal companies while maintaining investments — and engagement — in other fossil fuels.

“I think the engagement approach is real, robust, challenging of companies on key issues,” Smith said. “I’m thrilled we have active investors who’ve taken a stand and divested. I’m equally thrilled investors with trillions of dollars are engaging. I think the combination has value.”

Zevin, who worked for divestment from companies doing business in South Africa in the 1980s, said that approach combined divestment and engagement and, crucially, had little effect until the government got involved. When the state of Texas said it wouldn’t buy textbooks from companies doing business in South Africa, Zevin said, a local textbook publisher announced it was pulling operations from the country shortly thereafter. Other states followed suit, Zevin said, and businesses stampeded from the country. Within a few months, most American companies had left.

“That’s what finally did it,” Zevin said.

The lessons, Zevin said, are that political activism to promote government action is key, and that shareholders who don’t want to divest from oil companies can take action like pressuring them to stop exploring for more oil and return the money to shareholders.

Another way to look at fossil-fuel companies is as increasingly poor investments due to “stranded assets,” Davis said. The idea of stranded assets has already been applied to the coal industry because of reserves that will probably never be burned, Davis said. There are signs that oil companies are spending more and more to tap new sources, though he said he’s not ready to apply the stranded-assets label to oil.

Another option, Davis said, is to take positive action through investments and to direct money toward companies exploring climate-change solutions. There is an estimated $1 trillion gap between what is invested and what is needed to develop solutions that will help limit warming to 2 degrees centigrade.

“There’s a huge need for investments to help close the gap,” Davis said.