Ferguson: Through a global lens 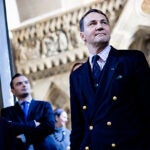 From protests to power plays

The events unfolding in Ferguson, Mo., are being watched around the world. The way the grand jury’s decision and its aftermath are being perceived abroad may be categorically different than how they are understood at home, according to Harvard Kennedy School historian and Associate Professor Moshik Temkin on this week’s episode of PolicyCast.

What we define in the U.S. as a “civil rights” struggle is often perceived beyond our borders as matter of human rights — and the difference is not just semantic, says Temkin.

Is it Civil Rights or Human Rights? | PolicyCast

HKS Associate Professor Moshik Temkin argues that the debate over civil rights in the United States, sparked by the unrest in Ferguson, Mo., is actually a debate about human rights and the difference is not just semantic.