The Islamic State of play 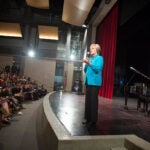 Faust makes ‘the case for college’

Analysts dig into the origins, motivations, and ambitions of surging ISIS movement

Whether it’s called ISIS or ISIL, few people a year ago had even heard of the radical Sunni Islamist group that had splintered from al-Qaida. But as the Iraq-based terrorist organization rapidly swarmed and took control of cities and towns in Iraq and Syria, it suddenly became a front-burner issue in American foreign policy.

After the group beheaded American journalists James Foley and Steven Sotloff and conquered territory all the way to the outskirts of Baghdad, the United States last month began a bombing campaign in Iraq and Syria. President Obama said the objective of the airstrikes was to “degrade, and ultimately destroy” ISIS. Thus far, the U.S.-led coalition does not appear to have made significant headway in thwarting the group’s ambitions.

So who are the members of ISIS, what do they want, and how have they taken center stage so quickly? The organization has grown so rapidly and claimed large swaths of territory with such alarming speed that even the name of the group is contested. It is called interchangeably “ISIS” or “ISIL,” which are geographic-based names, or simply “Islamic State.”

“I think that the name is instructive; it tells you what their goals are: They aim to create an Islamic state,” said Deborah Amos, an award-winning Middle East reporter for National Public Radio (NPR). “They tax, they police, they run the education system, they have a minister of oil, they have a minister of telecommunications, they are self-financed, they are wealthy, they are working on an ideological revolution in the places that they control.”

Amos joined Noah Feldman, the Felix Frankfurter Professor of Law at Harvard Law School (HLS), and Professor Kristen Stilt, co-director of the Islamic Legal Studies Program at HLS, for a wide-ranging discussion about ISIS before a standing-room crowd at Austin Hall Thursday afternoon.

“Where they come from is Iraq. They come out of Sunni disenchantment with the government in Baghdad. They crossed the border into Syria because they are picking up on the same disenchantment of a Sunni population who … feel that they have been dealt out of the regional game and feel that they have no other alternative to get their message across, which is, ‘We do not like the deal that we have,’” said Amos, a 1992 Nieman Fellow and a 2010 fellow at the Shorenstein Center on Media, Politics, and Public Policy at the Harvard Kennedy School (HKS).

“The most distinctive thing about the Islamic State thus far is how successful they’ve been in holding territory. The United States has been bombing now for more than 50 days … there hasn’t really been very substantial change on that map since the president went on television,” said Feldman. “It tells you that the strategy of holding territory has been fairly effective thus far.”

Feldman has written several books on Iraq and Islamic democracy and served as a senior constitutional adviser to the Coalition Provisional Authority in Iraq in 2003. He said that while many of the group’s actions and public statements thus far indicate it is “on the far end of radicalism,” it differs from other groups like the Muslim Brotherhood and al-Qaida and therefore, it’s “too soon” to say definitively what the ISIS ideology is.

“I think in some ways their ideology is evolving as we watch them,” said Amos. “It’s not necessarily ideological, but it is really about power. So I do think in some ways you can’t say that they have a fixed ideology because I don’t even think they understand all the parameters. They are, in some ways, making it up as they go along.”

So how has the organization been able to pick up so much support? In Syria, ISIS has grown in part because it is seen as a better alternative to the many brigand-like groups operating in towns under the misnomer umbrella term of the Free Syrian Army, Amos and Feldman said.

“What ISIS offered was order, and people were craving order in Syria. The second thing ISIS offered was a respite from the bombing,” said Amos, noting that the Syrian government largely refrained from bombing ISIS-held territories. “If you were a Syrian and you’d been through two years of complete chaos in northern Syria, ISIS looked pretty good.”

In Iraq, “By and large, the Iraqi Army had behaved so badly in Mosul that they [ISIS fighters] were welcomed when they first arrived,” said Amos. “So that is how they do it: They find places where there is chaos — people don’t know how to survive, they have no way to make a living — and ISIS brings order.”

The group is surprisingly modern in its communications and has been very good at recruiting through social media, reaching “angry, young Muslims” who see a future in an Islamic state, said Amos. The group also uses conscription.

“In Mosul, we heard stories that ISIS would come house to house and ask for a son. And if the answer was no, then they said, ‘Well, we’ll take the daughter.’ And so a lot of families felt that it was wiser to give a son. In some towns that wasn’t a hard bargain to strike,” she said.

For many recruits, ISIS offers a way to feel powerful and provides a reliable income. Foot soldiers can earn $600 a month or more if they advance, and they sometimes get free housing or even a wife, a typically expensive undertaking. “If you stay on their side of the law, life is not that bad,” said Amos.

The public beheadings of kidnapped Western journalists and aid workers, which were loaded onto the Internet, accelerated the U.S. confrontation with ISIS. They also served a longer-term strategic purpose for the group.

“Here, it has a dual effect: On the one hand, it signals to anybody who might be a potential recruit that this is a serious organization that isn’t afraid of anybody,” said Feldman. “The fact that they didn’t care about those inevitable consequences” of inciting Western retaliation “is itself an extremely powerful signal that they are acting as though they were a sovereign state.”

The Oct. 3 beheading of British aid worker Alan Henning, who had strong and active support from Muslims in England, including close affiliates of al-Qaida who vouched for him, also indicates ISIS’s growing confidence, said Amos.

“They killed him on a Muslim holiday and I think that the message was, ‘Too bad. I don’t care what you people in Britain think. We are not of you; we are a completely different organization, and we will show you what we will do.’”

The violence against outsiders and anyone deemed insufficiently loyal to ISIS has already had a desensitizing effect on many inhabitants under their control. “I think the most interesting thing is, over time, how [well] people adjust to the brutalities,” said Amos, who recalled a woman telling her of a scene in Raqqa where people sat outside eating lunch in view of decapitated heads that had been put on display in the center square. Also, ISIS is funneling teenage recruits into ideological camps for training.

“I think both of those things tell us it’s going to be very hard to unravel a generation that’s lived under ISIS, even if it’s just for a couple of years. They are really seeping into the heads [of people] in the places where they control,” she said.

While both Feldman and Amos said ISIS ultimately will be defeated, given the wide range of opposition the group faces and the unsustainability of an economic plan that relies on theft, smuggling, and extortion, it remains an open question whether the current airstrike campaign by U.S.-led forces can push ISIS back.

Feldman said some alternative efforts could include stepping up the bombings “very substantially” and working to motivate Iraqi forces on the ground, which would likely require the commitment of some U.S. ground forces, probably Special Forces acting in an advisory capacity.

It’s a conundrum the Obama administration is struggling with internally, he said.

“On the one hand, if they’re seen not to have had any impact” on pushing back ISIS during the rest of Obama’s presidency, “it will be very costly to the administration, the Democratic Party, and the president’s legacy. So there is reason to think he will act. On the other hand, there’s the understandable deep opposition domestically to putting in any ground forces. So this is a real puzzle.

“If I had to bet, I would bet that we would see a significant stepping up of air attacks, coupled with this very limited commitment of a very small number of Special Forces, to see if that makes a difference experimentally. It may, but my guess is it probably wouldn’t make a very significant difference, in which case there’s going to be a real crisis point in the policymaking process.”