Summering (with work) in Mexico 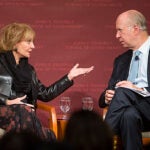 Second in a series on Harvard’s deepening connections to Mexico.

An old joke says professors teach at universities (and students attend them) for three reasons: June, July, and August. But in reality summers are often the most fruitful time for academics. Teachers and students explore their disciplines, or even consider new ones.

Harvard students who spent the summer working and studying in Mexico, which is often called the cradle of organized civilization in the Americas, echoed the maxim that travel broadens the mind, offering special opportunities and insights.

“Something inside me actually changed,” said Mariel Arvizu of her 10 weeks in Mexico City. The Guatemala-trained physician and cancer researcher, now a doctoral student in nutrition at the Harvard T.H. Chan School of Public Health (HSPH), worked on a long-term project around diet and health. “It was a deeper experience of the people and the work, and it gave me a lot of excitement to come back to my Ph.D.”

Jami King, a second-year master’s student at HSPH, found the same sense of forward propulsion during a summer month at the National Institute of Public Health in Cuernavaca, a 30-minute drive south of Mexico City, immersed in a study of domestic violence. “It definitely convinced me,” said the Texas native of her summer, that “this is the area I’m interested in.”

King, who lived in Honduras for two years, has studied forms of violence beyond war, including gang violence in urban settings. Her interest partly came from growing up in the Southwest, close to the border. The forms that violence takes there, she said, “have always been topics of conversation.”

The Harvard students who conducted research in Mexico over the summer also experienced the modesty and resourcefulness that characterizes such work there, as in much of the middle-income world. “It’s very different when you have a lot of resources and a lot of experts,” said Arvizu of the elaborate research facilities she had left behind in the United States.

Harper Hubbeling, a second-year student at Harvard Medical School (HMS), spent 10 weeks as a Harvard Global Equity Initiative summer intern in Mexico City at the new Instituto Nacional de Cancerología, the nation’s largest cancer hospital. Her project involved intensive interviews with 48 breast cancer survivors, and developing a plan to optimize their social survival. It was a good opportunity to explore “both research and policy,” she said.

Hubbeling interviewed younger women, who are increasingly the tragic face of breast cancer in Mexico. Compared with the United States and Europe, statistical trends show that the illness appears on average 10 years earlier in Mexican women. The reasons, which could include diet or genetics, are “still unexplained,” said Hubbeling.

With her experience came an intimate awakening to the challenges young women confront from a disease whose treatment may involve disfigurement. The women struggle with altered body images, social stigmas, relationship troubles, and employment discrimination. Before leaving for Mexico, said Hubbeling, “my interest in oncology was pretty theoretical.” Now she may consider it as a career path.

For three busy weeks in Mexico City, Ana Sandoval, a master’s student in environmental health at HSPH, delved deeply into the research she loves best: urban air quality and its health effects. Sandoval, whose family summers in her native Monterrey, studied chemical engineering at the Massachusetts Institute of Technology and later worked in San Francisco.

The chief air pollutants in Mexico reflect both modernity and tradition: car exhaust and wood smoke. With colleagues from Mexico’s National Institute for Public Health and the Molina Center for Energy and the Environment, she helped pinpoint the health effects of air pollution in the country from 2010 to 2012. (Her part of the study concerned 2010 mortality rates related to air pollution.)

The summer provided practical benefits, said Sandoval, a dual citizen. It renewed her confidence as a researcher, and it revealed to her an untapped universe of Mexican data sets so rich that they would propel her into doctoral work at Harvard.

But there were subjective benefits too, like the ones that her friend Arvizu described as magical. In the mornings and during spare hours, Sandoval chatted with the owners of her guesthouse in the heart of the city, and gossiped with neighbors. “It helped us feel,” she said, “where we were.”

Arvizu mentioned another social benefit that helped beget a real sense of place in the city. “There was food everywhere,” she said, “in great restaurants and (on) the streets.”

There was art everywhere too. Or that’s how Samuels Family Research Fellow Julia Cohn ’15 saw her month in Mexico City, “the museum capital of the world,” she wrote in an email. The Adams House history and literature concentrator was in the Distrito Federal, the political and economic core of the megacity, on the trail of 20th century activist painter Diego Rivera. (His mural “La gloriosa victoria,” or “Glorious Victory,” will be an “entry point,” Cohn said, to her senior thesis on early Cold War U.S.-Latin America relations, and on the Mexican art scene of the same era.)

Cohn has been a frequent visitor to the area during her undergraduate years. But this was her first as a scholar with an immersive mission. She pored through Rivera’s archived papers, visited his house studio, haunted his old cafes, met his grandson, and spent hours with Guatemalan painter Rina Lazo, who was Rivera’s assistant when the mural was painted. (At the end of her interview, Cohn discovered she had been sitting in the chair that Rivera used to paint the mural.)

“Researching the mural introduced me to a whole network of scholars and opened up new interests,” she said.

The sampling of Harvard’s summer researchers in Mexico revealed not just their varied interests, but also one that they have in common: Everyone wants to go back.

Cohn has looked into fellowships that would put her in Mexico for further study. Sandoval has been to Mexico on Harvard study trips twice already this year and is eager to return. Hubbeling is considering taking a year off within her medical training to return there. She also will be back later this month to deliver a paper on her summer research.

And Arvizu, rapt and reinvigorated after her summer there, is unequivocal about her postdoctoral dreams. “I would love to move back to Mexico,” she said, “in a second.”