Is that Wallace Stevens? 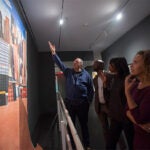 Sixty years ago this month, the poet Wallace Stevens landed in Boston to record some of his works for the Woodberry Poetry Room at the Trans-Radio Studio.

In his letter to John Lincoln Sweeney, the Woodberry’s then-curator, Stevens wrote: “I could come on Friday, October 8, or Friday, October 15. When I am going to do anything, I am like a woman — I like to do it my way, so that I prefer to come on October 8.”

And come on October 8 Stevens did.

Yet the recordings made that day “appeared to have been accidentally left out of the HOLLIS catalog entry for this series of studio recordings,” said Christina Davis, the Woodberry’s current curator.

The recordings were discovered by serendipity. The Woodberry “had digitized what it thought were the sum total of Stevens’ recordings that day,” according to Davis, and had moved forward in its effort to preserve recordings on reels. Not until Davis was invited by the Northeast Document Conservation Center to participate in a pilot program did she, alongside research assistant Mary Walker Graham, begin to survey the Woodberry’s approximately 2,000 uncatalogued phonodiscs.

With help from IRENE, or Image, Reconstruct, Erase Noise, Etc., a touchless technology that uses digital imaging to safely retrieve sound from historical recordings made on formats such as discs and wax cylinders, the Wallace recordings were uncovered.

As if the discovery itself wasn’t enough, Davis and Graham were especially pleased by its content: what they believe to be the only recording of Stevens’ sequence “It Must Change,” from his lengthy and difficult ars poetica “Notes Toward A Supreme Fiction,” as well as a higher-quality recording of “The Auroras of Autumn” than was extractable from the reels, said Davis.

The Woodberry Poetry Room premiered the recordings on Tuesday, with foremost literary critic and A. Kingsley Porter University Professor Helen Vendler on hand.

Born in Boston, Vendler traversed Harvard as a literature-hungry teenager, checking out poets at the Woodberry’s Vocarium, where she first encountered Stevens’ work in 1958.

“I remember seeing things I simply could not understand as poems,” said Vendler. “But when I heard him read at the Vocarium, it transfigured my whole life. From then on I’ve been writing about Stevens — incessantly, it seems.”

Born in Reading, Pa., in 1879, Stevens was quite familiar with Boston and Cambridge when he landed in town to record sections from “Notes Toward a Supreme Fiction.” He studied at Harvard from 1897 to 1900, winning all of the University’s honors for writing before troubled family finances forced him to leave short of a degree. After Harvard, he became a lawyer.

“The interesting thing to me about ‘Notes Toward a Supreme Fiction’ is how often it changes as you read it,” said Vendler. Critics tie the work to various philosophies and aesthetics, she said, “but, to me, it seems above all, that Stevens considered the poem a repudiation of the European heritage for the American poet.”

Stevens was symbolic — his poems difficult, if not impossible, to absorb after one reading, or listening. But Vendler extracted the personal from “The Auroras of Autumn,” the title poem of his last collection, published in 1950, five years before his death.

Stevens led a difficult life, Vendler said. His family disapproved of the woman he married, and didn’t attend the wedding. Stevens didn’t speak to his father for the rest of his life, and only after his father’s death did he reconnect with his mother. His marriage was unhappy, as well; his wife, Elsie Kachel, was mentally ill. When Stevens was on his deathbed with stomach cancer — 10 months after the Woodberry recordings — she never once visited.

“The Auroras of Autumn” is long and multihued, but ultimately, said Vendler, “an assertion that life is always tragedy.”

Stevens had a cough on the day of recording, but nevertheless his giant monotone still resounds, along with the crackling charm of a record.

“In many cases, producers and editors removed the kind of procedural elements and vocal marginalia that we, in our postmodernity, often revel in,” said Davis. “‘The imperfect,’ to quote Stevens, ‘is our paradise.’”

Listen to the recordings of Wallace Stevens here.