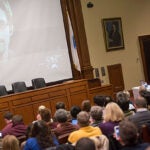 MEXICO CITY — In a building that originally housed a Jesuit college more than a century before the construction of Harvard’s Massachusetts Hall, alumni and friends of the University gathered yesterday in the heart of Mexico City for the latest event in the Your Harvard series. President Drew Faust, faculty members, and local alumni celebrated the many connections shared by Harvard and Mexico, some dating back more than a century.

Your Harvard is a global series of events organized by the Harvard Alumni Association (HAA) that will take place throughout The Harvard Campaign. Alumni have already convened in London, Los Angeles, and New York to hear about the future of the University and discuss cross-disciplinary perspectives with faculty on the challenges facing society.

More than 500 alumni came together last night at the Colegio de San Ildefonso, which was reopened in 1994 as a museum and cultural center that features some of the earliest examples of the Mexican muralist movement.

Gesturing over her shoulder to one such mural, “La Creation” by Diego Rivera, which framed the back of the stage, Harvard art curator Mary Schneider Enriquez reflected on Mexico’s tradition of blending art, education, and political discourse. The government’s decision in the 1920s to encourage artists to paint the inside walls of public buildings amounted to an effort to “educate through images.”

“Mexico has a very long history of art and politics being totally intertwined,” said Schneider Enriquez. “It is one of the great things about Mexico that I have always loved.”

She was a longtime resident of Mexico, and it was her unique perspective on Latin-American art, and Mexican art in particular, that she said led Harvard to hire her as Houghton Associate Curator of Modern and Contemporary Art for the Harvard Art Museums.

Faust noted in her address that she was the fifth consecutive president of Harvard to travel to Mexico, lauding the longtime connections between the University and a country that more than 1,200 alumni call home.

“The University’s increasingly global reach is exemplified by the students and faculty we now attract, and by expanding research and course offerings across the University,” said Faust. “The research interests that spark connections between Harvard and Mexico are extraordinarily varied — from archaeology to the arts, from education to public health, to economics, politics, [and] public policy.”

Strengthening that connection for the past quarter century, the Fundación México en Harvard, A.C. was established to provide financial support for residents accepted to graduate and postgraduate programs at Harvard. To date, nearly $12 million has been awarded to make Harvard a reality for hundreds of students from Mexico.

Students who receive a Fundación scholarship are required to return to Mexico after their studies to work in the country for at least two years.

Enrique Tellez Kuenzler, M.B.A. ’91, the Fundación’s president, celebrated the organization’s work by proudly noting that Mexicans now make up the largest number of Harvard students from Latin America. This past year alone, 98 Mexican students were enrolled at Harvard.

Faust also noted that digital learning is shrinking the distance between Mexico and Cambridge. Since the 2012 launch of HarvardX, more than 20,000 Mexican students have participated in the dozens of online courses created by faculty from across the University.

A diverse group of faculty similarly touched on innovation in education during the evening’s panel discussion.

“The key challenge of innovation is to integrate knowledge,” argued Julio Frenk, dean of the Harvard T.H. Chan School of Public Health and Mexico’s former Minister of Health. Universities, he noted, are drivers of innovation that produce a unique product: knowledge. “Knowledge is the most potent force we have for enlightened social transformation, and that is exactly what universities are there to produce, reproduce, recreate, translate, and lead. Therefore, the pathway [is there] for innovation to tackle the most important challenges.”

Jorge I. Domínguez, Antonio Madero Professor for the Study of Mexico and vice provost for international affairs, led the panel in a discussion that touched on a wide range of topics, including creativity in the arts, business, public health, and culture.

Ramírez delivered the economic argument in favor of continued innovation in what he called the “creative industries.” Rattling off a host of statistics — including the fact that $1 trillion in U.S. economic activity is based in creative industries, 6.5 percent of the nation’s GDP — he highlighted the important role that innovation in the arts plays in the American economy.

“Sometimes people don’t realize how important creativity is to the economy and how much the creative industries contribute to economic growth,” Ramírez said. At a growth rate of 4.7 percent in recent years, he noted, the creative industries — from film to video games — have grown at twice the rate of the overall U.S. economy and now rank as the United States’ top export industry.

The liberal arts, he said, are critical to underpinning the creativity that enables that economic success.

“Something that I really valued from my College experience was the liberal arts curriculum,” Ramírez said, recounting how he looked through the course catalogue as a freshman and realized he’d never be able to take all the courses that interested him in four years.

As examples, he recalled an astronomy course in which he learned how telescopes work by visiting the Science Center, as well as a course called “Thinking About Thinking: Law, Science, and Philosophy,” co-taught by the late professor of geology Stephen Jay Gould, Harvard Law School Professor Alan M. Dershowitz, and philosophy Professor Robert Nozick.

“They would all tackle very moral questions, big dilemmas,” Ramírez said. “And each one would tackle it from a scientific, legal, and philosophical standpoint. And for me that’s one of the privileges of a liberal arts education, that you can actually open your mind and really change the way you see the world.”

The Your Harvard series continues later this week in Texas, where the Harvard Clubs of Dallas and San Antonio are both celebrating their 100th anniversaries. Events are also planned for Chicago and Seattle early next year.

Harvard President Drew Faust, University administrators, and faculty members are in Mexico this week for a series of meetings, tours, and alumni events.  Read about Harvard’s deepening connections to Mexico in an ongoing Gazette series.  Read vignettes showcasing the visit here.