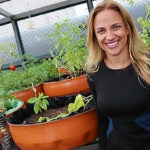 From Mexico to Harvard, and back

Rarely is the term “city hall” considered synonymous with the words “innovation” or “efficiency.” Too often, the public image of municipal government is of a static bureaucracy staffed with disinterested clock-watchers focused on petty tasks and arcane processes.

But two Harvard authorities on government and technology say it doesn’t have to be that way.

In their new book, “The Responsive City: Engaging Communities Through Data-Smart Governance,” Stephen Goldsmith, the Daniel Paul Professor of the Practice of Government at Harvard Kennedy School (HKS), and Susan Crawford, the John A. Reilly Visiting Professor in Intellectual Property at Harvard Law School (HLS), offer a road map for managers who want to move beyond the traditional silos of urban government. By embracing the latest tools, like fiber connectivity and predictive data analytics, they posit, the city hall of the future could radically reshape how local government serves its citizens, improving both civic life and trust.

A “responsive” city is one that doesn’t just make ordinary transactions like paying a parking ticket easier, but that uses the information generated by its interactions with residents to better understand and predict the needs of neighborhoods, to measure the effectiveness of city agencies and workers, to identify waste and fraud, to increase transparency, and, most importantly, to solve problems.

“Cities are organized vertically, and people live horizontally. They don’t live in the transportation or parks department … they live in a neighborhood,” said Goldsmith, who directs the Innovations in Government program at HKS and Data-Smart City Solutions, a project that focuses on local government efforts to improve citizen-city engagement through technology. “I think the biggest problem is the way government is organized. It’s organized to make sure city employees produce the exact same widget every day, no matter whether anybody needs it or not, and no matter whether somebody needs zero or two.”

By using its own data and social media, a city “should learn what its citizens are saying about their needs and the issues in their communities; it should learn across agencies about the solutions to problems; it should learn from the data about good actors and bad actors,” like businesses and property owners who operate irresponsibly, said Goldsmith. “A city that’s responsive is one that tailors its interventions in ways that produce more results for the same dollars and more responsively.”

But until recently, even if a city had informed, cabinet-level staff members who understood the potential of such an approach, the data sources to conduct deep analyses were disconnected, making it hard to identify useful patterns of activity.

“What’s new today is that technologists and policymakers are learning how to look across disparate data and visualize the state of the city and target interventions where they can be most useful,” said Crawford, a co-director of the Berkman Center for Internet & Society.

Crawford will discuss the theories and practices of “responsive” cities on Oct. 28 at the HLS Library with Mitchell Weiss, a Harvard Business School professor and chief of staff to former Boston Mayor Thomas Menino; Somerville Mayor Joseph Curtatone; Jascha Franklin-Hodge, CIO for the city of Boston; and Jonathan Zittrain, Berkman’s director.

The book details an inside look at Boston, New York City, and Chicago, three cities at the forefront nationally in the effort to become more responsive. Led by Menino, Michael Bloomberg, and Rahm Emanuel, respectively, each city had a strong mayor who made using data to achieve electoral priorities a cornerstone of their recent administrations.

“Having a strong leader who will question effectiveness is quite important — someone who will lead the way in terms of data integration and business process re-engineering,” said Goldsmith.

City governments have been slower than the private sector to embrace technology and data analytics, in part because of the costs, but also because of what has become an ossified, overly modest definition of success.

“A number of city agencies think they’re effective because they do a very good job of producing activities — even if the activities don’t produce the outcome,” said Goldsmith, who served as deputy mayor in New York City, overseeing the city’s technology overhaul during Bloomberg’s third and final term.

“Traditionally in cities, street workers showed up in the morning and they got their routes. ‘Here are the potholes you’re supposed to go fix; go fix them.’ Now, they could drive over four potholes on the way to the one they’re supposed to fix, but their instructions are, ‘You’re not to fix those,’” he said. “Data can do all of that, but we just need to trust our employees to be problem-solvers.”

Cities striving to become more responsive must have a “stack” of essential building blocks, said Crawford. First, they need fiber connections so that large data files can be shared quickly and seamlessly among city staffers, along with data sensors positioned at key locations like city bridges, tunnels, and major roadways to help identify problems and repairs. Then, they should publish collected public data and share it across city government and with the public, and have data scientists study the numbers to discern trouble spots that will drive government action and perhaps policy.

Making the collected data open is a critical component of responsiveness. “It’s important because open data — well visualized — allows employees to see other agencies, it allows residents to hold their city hall responsible, but also because it provides data that can lead to breakthroughs and solutions” from inside and outside government, said Goldsmith.

Even as many cities have begun to acquire the necessary technology to be more responsive, significant cultural and leadership barriers remain.

“There is a new generation of mayors coming in who understand the potential of digital technology to make lives better for people in their cities, but they have a lot to overcome,” said Crawford. “The traditional ways government does business, the walls between departments, and rules … make it difficult to collaborate across city hall. It’s extremely difficult to experiment, to easily engage with startups, to find the best technology for a particular direction rather than the traditional way of doing things.

“Procurement is an enormous barrier,” she added. “Civil service rules can also be a major barrier. We need to find a way to bring people into city government for short tours of duty — two years, four years — and then send them back out to industry. And right now, that’s very hard.”

Also, city “agencies are distrustful” of the open-government movement, said Goldsmith. “They don’t view it, as I do, as a better way to gather information. The average agency official thinks, ‘The way I get information is I go to a neighborhood meeting at 7 p.m., people scream at me for 3½ hours, and then I go home. [So] a lot more of that doesn’t sound like a really good thing to me.’”

Although there’s still a long way to go to remake moribund government bureaucracies into flexible and lean service providers, Goldsmith said, “I’m hoping that the book, which is written more as a practitioner’s book than an academic book, will motivate public officials who are stressed for resources, stressed by citizen complaints, to understand that there are affordable tools that will dramatically change the way they produce public services,” and who will receive in return the trust of residents who should be the ultimate “beneficiaries of a more responsive city.”

Susan Crawford will be joined by Mitchell Weiss, a Harvard Business School professor and chief of staff to former Boston Mayor Thomas Menino; Somerville Mayor Joseph Curtatone; Jascha Franklin-Hodge, CIO for the city of Boston; and Harvard’s Jonathan Zittrain to discuss the theories and practices of “responsive” cities on Oct. 28 at the Harvard Law School library .