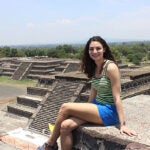 Summering (with work) in Mexico

Harvard Law School students with the Harvard Immigration and Refugee Clinical Program (HIRC) were working with Greater Boston Legal Services on a case involving a Guatemalan man in the summer of 2013 when they collectively had an “aha” moment.

The pressure was high, and everybody was working on two sets of legal briefs that were due before the court. “We were having a meeting here, and all of a sudden everybody understood what was on the table, and the writing was very powerful,” said John Willshire Carrera, co-director of the HIRC site at Greater Boston Legal Services.

The HIRC program trains students to represent refugees seeking asylum in the United States, as well as other immigrants, said Deborah Anker, the program’s director and a clinical professor of law.

“We represent a lot of women and children, LGBITA [lesbian, gay, bisexual, intersex, transgender, and asexual] cases, and cases where people face persecution under what people may regard as the classic ground of political opinion,” Anker said. “Recently, we’ve been representing a lot of people who are fleeing the warfare — it’s called gang violence but it’s really warfare — in Central America.”

HIRC students work on all these matters with supervision. They also work on litigation and Circuit Court of Appeals cases, often filing amicus, or “friend of the court,” briefs, working side-by-side with the instructors.

“They have done extraordinary work, especially with women refugees and with children,” Anker said.

The last two decades have seen a tremendous increase in the numbers of immigrants being jailed, often for minor criminal offenses, Anker said. Because of their legal troubles, they face deportation to native countries they may barely know, often without the benefits of relatives who are long since gone.

“The deportation policies in this country, the grounds for deportation, have expanded exponentially over the last 20 years,” Anker said. “I would say especially since 1996.”

HIRC celebrated its 30th anniversary in June, marking the occasion with what Anker called an extraordinary conference that drew major national and international practitioners and scholars.

Carrera, who has worked with co-director Nancy Kelly and HIRC for 30 years, said the cases are often so protracted that students who start a case end up handing it off to other students who will see it through to the end.

HLS students can also join the clinic’s Harvard Immigration Project (HIP). Students run HIP with supervision and guidance from lecturer Phil Torrey, who also teaches a course on “crimmigration,” and works with students on clinical projects.

The Harvard Immigration and Refugee Clinical Program has enjoyed a couple of major victories in recent months. In July, the First Circuit Court of Appeals overturned a Board of Immigration Appeals decision denying asylum to a Guatemalan Mayan Quiche Indian. The man had been a victim of racial and ethnic persecution by the Guatemalan military. And in August, the Board of Immigration Appeals recognized domestic violence as grounds for seeking asylum in the United States.

“We have been trying to get them to formalize the law, include women fairly within asylum law, and recognize gender-based violence for over 20 years now,” Anker said.

“We provide a lot of support and guidance, so they are not really stranded on their own, which is not appropriate from our point of view,” she said. “Because they get the intense supervision, they have an experience very different than when they start working at firms and NGOs [non-governmental organizations]. Our main goal is to educate the students.”

In addition to learning the law, the students learn how to acquire and present evidence, work with interpreters, obtain documents and other evidence from foreign countries, interview, and work with experts.

“When I first started, hardly anybody was going into immigration, but now I would say at least half our students want to go into it, if not more,” Anker said.

The skills the students learn in the program are increasingly relevant to other areas of law as well, she said.

Through the HIP project, first-year students have the opportunity for practical work in the immigration field, even though they can’t formally join the for-credit clinic at the law school until their second year.

Some of the work the first-year students do includes bond hearings and helping eligible immigrants and refugees apply for permanent residence.

HIRC gets hundreds of requests for representation every year so it can’t accept them all, Anker said. Greater Boston Legal Services gets several hundred more and takes more cases than Anker’s staff at HLS, because it has a broader mandate.

“We take cases that are going to raise new issues of law,” Anker said.