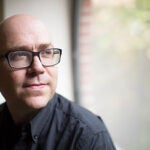 Congress does not hide elephants in mouse holes.

That colorful legal concept — which means government agencies can’t find sweeping new powers by re-interpreting minor sections of existing law — may determine the success or failure of proposed EPA power-plant regulations, rules that some observers have described as the nation’s most ambitious action on climate change to date.

The regulations, unveiled last June, seek to cut emissions of the greenhouse gas carbon dioxide 30 percent from 2005 levels by 2030. The plan, to be finalized in June, gives states flexibility in how they reach the target — through a combination of cleaner technology at existing plants, replacing coal-fired plants with cleaner natural gas, boosting use of renewable power, and encouraging end-user efficiency.

“It’s a beautiful rule. It is incredibly creative. The question is, Is it legal?” said Richard Lazarus, the Howard J. and Katherine W. Aibel Professor of Law at Harvard Law School (HLS) and an expert on environmental law and the Supreme Court. “Not everything that is good is legal. Not everything that is bad is illegal.”

In a discussion on the proposed regulations Wednesday at the Maxwell-Dworkin building, Lazarus and Archibald Cox Professor of Law Jody Freeman, director of HLS’ Environmental Law Program, said that the proposed rules not only step into the gap created by Congress’ refusal to pass climate legislation, but also have the potential to both transform the national energy scene and invigorate international climate-change negotiations. The event was sponsored by the Harvard University Center for the Environment (HUCE) and hosted by HUCE Director Daniel Schrag, the Sturgis Hooper Professor of Geology and a professor of environmental science and engineering.

“EPA regulations may seem a little bit down in the weeds, but the new rules are probably the most significant … action the U.S. has taken on climate change,” Schrag said.

A major target of the proposal, currently open for public comment, is emissions from coal-fired plants, which release 75 percent of the greenhouse gases produced in electricity generation, which in turn is one of the country’s major sources of carbon dioxide.

“These rules are going after the big game for the first time,” Lazarus said.

The plan won’t go into effect without a fight, however. Freeman and Lazarus said that industry opponents are already filing lawsuits on a variety of technical issues.

The EPA is expected to prevail in early cases on technical aspects of the law, and recent legal decisions that have gone its way may suggest that the courts will ultimately side with the agency on the major issues involved.

But some signs point in the other direction. For example, the Supreme Court could rule against the agency if the justices see the regulations as an unreasonable power grab. Freeman, who described the “elephant in a mouse hole” doctrine, compared the current situation to the court’s 2000 ruling that the FDA didn’t have the authority to regulate tobacco as a drug because Congress would not have so casually granted the agency authority over an industry with such broad economic and social impact.

“Although there is lots of good news for the EPA in recent court decisions, there is reason to be concerned,” Freeman said.

On the one hand, Freeman said, the regulations could be viewed as extending the EPA too far into the realm of determining the nation’s energy mix, where other federal agencies have oversight authority. On the other hand, she said, the EPA could argue that its pollution-control authority has always impacted the nation’s energy system, through measures such as those on sulfur dioxide and nitrogen oxides, and that this is just another, and no less necessary, step.

Cases will first go to the D.C. Circuit Court and then, possibly, to the Supreme Court. Once there, Lazarus said, the future of the plan may hinge on the deliberations of Justice Anthony Kennedy, who has proved the swing vote in many major decisions.

The plan is likely to affect the nation’s energy and climate-change landscape regardless of its fate in the courts, Freeman said. It will force serious preparations by industry, as well as conversations within states about appropriate action. It could prompt some states to consider cap-and-trade regulations on carbon emissions, similar to those already adopted by California, and push some industries to begin investing in cleaner technology.

“The administration has made a decision that it’s time to go big or go home,” Freeman said. “If it gets struck down, there will be movement in the interim, things will have shifted. … They [the administration] can’t predict the future, but they don’t want to do something small.”