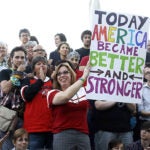 A watershed on weddings

Boasting a resume that includes interviews with every U.S. president since Richard Nixon and world leaders from Fidel Castro to the Shah of Iran to, in a historic joint interview in 1997, Egyptian President Anwar Sadat and Israeli Prime Minister Menachem Begin, Barbara Walters sat down at the Harvard Kennedy School Tuesday evening for a candid conversation with David Gergen, director of the School’s Center for Public Leadership, about her career in television journalism.

Long before her gauzy Academy Award specials and coffee-klatch talk show, “The View,” Walters established her hard news bona fides as a fierce competitor who often scored the big newsmaker “get” and then made cagey subjects say what they didn’t intend to say.

One of the few female journalists on television in the early 1960s, Walters was typically assigned fluff like fashion shows or what she called “tea-pouring” segments instead of hard news, a domain solely for her male colleagues. “A Day in the Life of a Playboy Bunny” was one such assignment, Walters told Gergen as she demonstrated the proper — and improper — way of serving cocktails in the revealing waitress costume.

Even after proving herself, she was not allowed to ask any serious questions during interviews she shared with “Today” host Frank McGee. After protesting to NBC executives, she was permitted to ask one question after McGee had posed three.

If she found her own interviews outside the studio, however, she could ask whatever she wanted. Walters took advantage, nailing the first TV sit-down with Henry Kissinger, and never looked back.

On Barack Obama: Walters, who interviewed the president first in 2008, then in 2010 with his wife, Michelle, and again in December 2012, spoke of the “disappointment” she hears from many people who know or have worked with him since that transformative first election. “There’s also the feeling that he doesn’t see enough people, that he doesn’t listen to people” and that even when he does, “he doesn’t respond, he doesn’t take action, that he’s sort of this solitary figure in the White House,” Walters said, echoing criticisms leveled in recent memoirs by Leon Panetta, the former secretary of defense and CIA director, and Robert Gates, Panetta’s predecessor in the Defense Department during the Obama and George W. Bush administrations.

“I don’t think he cares what people think. I think he cares enough to be reelected and I think he cares enough about the issues he cares about, but I don’t think he worries day by day what people think,” she said. “This is a man who had to spend his childhood pleasing people. First a father he didn’t see, then a stepfather that was not really there for him, then a mother who abandoned him to grandparents. He spent all his early years trying to be accepted and liked and I think we have to recognize the mark that it made on him today.”

On Hillary Clinton: Walters has had a long-standing, positive relationship dating back to Bill Clinton’s presidency, conducting several interviews with her from 1996 up until Walters’ last appearance on “The View” in May. The Clinton marriage is still going strong, she said: “I think she’s crazy about him.” As for Hillary Clinton’s candidacy in 2016, “I think she would make a very good leader as president,” said Walters, though she’s not convinced it’s a fait accompli. “I wouldn’t bet 100 percent because it’s so tough to run. She’s gone through so much.”

On Richard Nixon: Walters recalled doing Nixon’s first live post-resignation television interview in 1980. He had already turned down “60 Minutes,” she said, because he wanted to speak without being edited. Walters gambled that by posing her toughest question to Nixon in the last 30 seconds on air, he would be forced to give a straight yes-or-no answer. “Are you sorry you didn’t burn the tapes?” Walters asked, getting back the stunning revelation: “Yes, I think so.”

Asked by Gergen to describe Nixon as a person, Walters said, “He seemed to me constipated. Everything was such an effort. … When we did an interview, he’d start out telling dirty jokes to the camera crew. He wanted to be liked, he wanted to reach people, and he had no idea how to do that. He didn’t in his private life; he didn’t in his professional life. He was a man who was ultimately tragic and never found himself.”

On Ronald Reagan: Walters visited his ranch in 1981, driving around the property with him in the “scroungiest Jeep” she had ever seen to “a very comfortable house with no books.” “He was the nicest man,” she said. “Whatever you think of his politics, he was a gentleman and a lovely person.”

On Vladimir Putin: Walters said she saved her riskiest question for the end of her 2001 interview with the Russian president, in case he walked out: Mr. Putin, did you ever kill anybody? “And he gave me what I thought was the strangest answer. He said, ‘No because that wasn’t in my area.’”

On Big Gets Not Yet Gotten: Despite the staggering list of big names she’s managed to score interviews with, Walters said she’d love to nail down two more: Pope Francis and Queen Elizabeth.