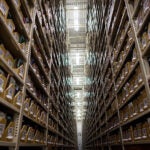 Where books (and more) go to wait

Perhaps no single journey holds more mystical fascination for Americans than the cross-country road trip. Jack Kerouac, John Steinbeck, and Hunter S. Thompson famously wrote about the open road as a metaphor for personal and intellectual freedom and a vehicle for self-discovery and social commentary. And for decades, it’s been a summertime rite of passage, uniting everyone from families in station wagons to intrepid campers to vagabonds and outlaws, all eager to hit the pavement and experience the nation from sea to shining sea.

Kunho Kim, a Harvard College sophomore raised in South Korea, knew that one of the things he absolutely had to do while living in Cambridge was travel around the nation. Brad Riew ’17, whom Kim met on his first day of freshman year during tug-of-war at Thayer House, got on board right away. The pair began planning their itinerary in earnest last spring, picking up two more like-minded travelers along the way: You-Myeong Kim (no relation) ’17, and Cynthia Cheung, a recent graduate of the University of Bath in England.

Click here for a full rendering of the interactive map.

But it wasn’t long before their plan ran into a snag. Kunho Kim has needed a wheelchair to get around since a ski-jumping accident in Montana in 2010 left him paralyzed from the waist down. While researching hotels, restaurants, and sightseeing attractions that would be accessible to him, it became clear that such information, if available at all, was surprisingly hard to find. Despite more than 20 years since the Americans with Disabilities Act (ADA) became law, if the information wasn’t buried deep in the back of guidebook and website listings, it was incomplete or used confusing terms.

Frustrated, Kim and the group refocused their trip with a higher purpose: to gather accurate, reliable data for wheelchair travelers so others won’t have to slog through the same uncertain terrain or endure unexpected discomfort and inconvenience.

“For example, getting a cab. It says they have 14 wheelchair-accessible vans, but if you actually call them, they’re like, ‘You have to wait an hour and 30 [minutes],’” said Kim. “And if you ask them how many vans they have available right now, they say, ‘We only have one running now.’” Although museums generally have wheelchair ramps and accessible entrances, he added, “You kind of need to know where to go. But that information is not readily available, so I thought that’s something I could do for people like me.”

On July 10, the group piled luggage, camping gear, a cooler, and Kim’s wheelchair into a rented Ford Expedition in San Francisco and began snaking across country, hitting 20 cities and three national parks, including Yosemite and the Grand Canyon, before pulling into in Cambridge on Aug. 24. They created a blog called “Wheel Project 2014” about their trip and will use their findings to assemble a guidebook to wheelchair-friendly travel on a budget, to be published next year as part of Harvard Student Agencies’ “Let’s Go” travel series.

According to U.S. Census data, about 3.6 million people over age 15 use a wheelchair; another 11.6 million require a cane, crutch, or walker to get around.

Kim found that the accessibility information provided by hotels was often flat-out inaccurate, creating major headaches. Budget hotel websites that assured prospective guests that they had “roll-in” bathrooms frequently turned out to be misleading. Either the designated rooms were already booked when they checked in, or they were not truly accessible.

“We asked a couple times, ‘Do you have a wheelchair-accessible bathroom?’ But once we get into the hotel, either they have a tub, or it’s not accessible and totally different from what we expected,” said Kim.

“A lot of them aren’t practical. Sometimes they’ll be missing a bench, sometimes the railings would be far from the hand control, sometimes the shower nozzle would be so far apart that it would be impossible” to get wet, said You-Myeong Kim.

To pay for the trip, the group raised just over $6,600 from families, friends, and other supporters through a crowd-funding website and received a grant from the Christopher & Dana Reeve Foundation, which funds research and advocacy for curing spinal-cord injuries.

Now back at Currier House, Kim said that despite public awareness and sensitivity to the need for accessibility, even getting around Cambridge’s uneven brick sidewalks or in and out of its older buildings is still pretty difficult.

“Harvard Square is one of the worst,” he said, noting that crossing the Yard or visiting Riew and You-Myeong Kim at Eliot and Kirkland Houses, respectively, is tough because of the narrow old doorways and steps.

The ongoing House renewal program, under which renovations to Leverett House’s McKinlock Hall and Quincy House’s Stone Hall were recently completed, will bring full accessibility, including elevators, to all of Harvard’s historic undergraduate housing, said a University spokesman.

Exhausted since returning to Harvard and jumping into a new semester, Kim said he’s happy the trip ended safely. And while the experience was certainly fun and exciting, just as he had hoped, it wasn’t without some trying times.

“At some point of the trip, I just wanted to quit everything and wanted to leave,” he said. Fortunately, the group helped pick him up in his darkest hours. “The positivity they had was the drive to help me withstand the pressure and the stress” of traveling and producing a book. “What I learned by the end of the trip is to enjoy the trip and worry about the book later.”

All in all, Kim said, “It was the best summer I had so far. I can say that proudly.”