A closer look at ‘Who’s Choosin’ Who?’ 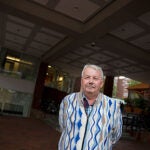 From bad to worse?

Commentator Harris-Perry offers her view on the ‘New American Politics’

Melissa Harris-Perry, the host of the weekend news and political talk show that bears her name on MSNBC, addressed nearly 400 people at Radcliffe’s Knafel Center on Thursday for the Maurine and Robert Rothschild Lecture. Her topic: “Who’s Choosin’ Who? Race, Gender, and the New American Politics.”

A professor of political science at Wake Forest University and a columnist for The Nation, Harris-Perry said she believes that living in a democracy means having the right to govern and not simply be governed, to rule and not just be ruled, to be heard and not silenced, and to lose without fear that the winners will take all. But securing that system, she noted — and especially a share for the losers in an election ― is difficult in practice.

“Thomas Jefferson is my personal obsession, having grown up at the University of Virginia and because he is in the moment of penning the Declaration of Independence doing an extraordinary thing, that many in the political world failed to do in this moment,” Harris-Perry said. “He writes an aspirational document and this document is key to the thing that continues to make America an interesting project.”

The struggle, however, is fulfilling the promise of Jefferson’s statement that all men are created equal. “[Martin Luther King Jr.] later calls it a check that has come back for insufficient funds,” said Harris-Perry. “But it’s better that the check was written — then it is clear that the debt is owed.”

A steady expansion of franchise for Americans began in 1870 with the 15th Amendment, which promised that voting rights could not be denied “on account of race, color, or previous condition of servitude.” The 19th Amendment, ratified in 1920, secured the voting rights of women.

Both African-Americans and women have cultivated that franchise, Harris-Perry said. Black voters are becoming an increasing portion of the overall electorate. By most measures, in 2000 and 2008, African-American voters exceeded other minority groups and white voter turnout. In every election since 1980, the number of female voters have exceeded the male voter turnout. In 2004, 8.4 million more women than men voted in the election, she said.

“What we see is that black folks really take pretty good care of their franchise,” Harris-Perry said. “If you take it by gender, you will see this is powered by black women. Black women are the reason Barack Obama is president.”

Women are too complicated and diverse to be identified as a single voting block, she argued. In the 2008 presidential election, 56 percent of white women voted for Republican Mitt Romney. He also won the married woman vote. Obama won the votes of 96 percent of African-Americans, as well as the majority of Latino and single women.

“So the gender gap is real, but it is crossed by race and status,” said Harris-Perry. “I think we do a disservice in thinking of the franchise as primarily being about identity groups, and that we might be better to remember other aspects of our constitution.”

One example she sighted was the 13th Amendment, which impacted the voting rights of people in prisons across the nation. In 2010, 5.8 million Americans were incarcerated and unable to vote. She also focused on current legal battles dealing with the requirement that voters have specific identification as well as access to polling places.

But Harris-Perry said the real challenge is encouraging women, African-Americans, and other minorities to seek office.

“I want to think about how we determine who is governing and is this just,” she said. “I think of voting like the brushing your teeth of democracy: I’m pleased but not impressed.”

Gregory Davis, 26, a first-year doctoral student in African-American studies, was one of many attendees who stood in line to ask Harris-Perry a question following her lecture.

“She was candid and she talked about politics in a way I have not thought about before, and about the give-and-take of taking power, giving power to other people, and how we negotiate and manage that,” he said. “It was a really brilliant illustration of the world we are in right now.”