Voice of the brutalized 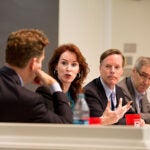 Researchers fanned out in one of the most dangerous corners of the globe late last year, asking residents of a brutalized part of the Democratic Republic of the Congo (DRC) their thoughts on violence, security, and the need for justice.

The in-depth interviews reveal that, although fighting continues there, many people believe that their own security has improved in the last five years. The findings also show, however, that respondents don’t believe the improvement is due to government action or intervention by the United Nations, whose MONUSCO mission to the region is widely viewed as ineffective.

Giving a voice to the region’s impoverished, disconnected inhabitants were Harvard Humanitarian Initiative (HHI) researchers Patrick Vinck and Phuong Pham, who have worked in the DRC for a decade and who, together with local collaborators, coordinated teams of interviewers who canvased urban centers and remote rural villages, some accessible only on foot.

“It’s clear that the security situation has improved. It’s definitely better than it was five years ago,” said Vinck, who is director of HHI’s Program on Vulnerable Populations, as well as a visiting scientist at the Harvard School of Public Health and a lecturer on medicine at Harvard-Affiliated Brigham and Women’s Hospital and Harvard Medical School (HMS).

The survey tallied responses from more than 5,000 residents of North and South Kivu provinces and from the Ituri district, areas that have been embroiled in conflict for decades. The Rwandan army crossed the border, and ethnic Hutu and Tutsi groups clashed in the wake of the Rwandan genocide in the early 1990s. The violence has led to the rise of homegrown Mai-Mai militia groups, which were created to protect communities against armed groups but have themselves been implicated in atrocities.

The area has been affected by two regional wars. The second, from 1998 to 2003, involved nine African nations and caused millions of deaths, mostly from starvation and disease. Though that war ended in 2003, peace in the region has been elusive, and armed groups continue to operate.

The survey, sponsored by HHI and the United Nations Development Programme, shows the pervasive reach of the region’s ongoing violence. Some 67 percent said they’d been displaced by fighting since 2002, 32 percent had lost a member of their household to violence, nearly one in five had been physically attacked, and one in 10 had been taken prisoner or held captive.

The Congo survey was released at the same time as a second survey, of attitudes in Abidjan, the largest city in the West African nation of the Ivory Coast, which recently emerged from years of civil war. That poll, of 1,000 residents, said that, as in the DRC, people have little trust in the government.

The survey work in the DRC, the Ivory Coast, and other global trouble spots is difficult but important because it begins to fill what has been a vacuum in postwar planning, according to Vinck and Pham, who is director of HHI’s Program on Evaluation and Implementation Science, a research scientist at the Harvard School of Public Health (HSPH), and a lecturer at the Brigham and HMS.

“Unlike health or education, on which a lot of data is available, there is little information to guide peace-building efforts,” said Pham. Vinck added, “Such data is critical because of the high stakes and human cost if peace fails.”

The DRC survey showed not just that the security situation has improved, but that those gains are fragile. While 48 percent said security is better, about a quarter said it has remained the same, and a sizeable minority — 24 percent — said it had worsened.

A bit of positive news from the survey was that intra-ethnic tension has declined somewhat, with 79 percent ranking relations with members of other ethnic groups positively, up from 60 percent five years ago.

The results also show, however, that the Congolese government, including the police, army, and the courts, has work to do.

Respondents also believe that police and soldiers need regular pay and training, and that the formal court system is corrupt and biased in favor of the rich.

Based on the survey results, Pham and Vinck recommended steps such as training and paying the army and police, and suggesting the government focus on effective service delivery, transparency, and accountability to rebuild trust. They also recommended that the U.N. mission engage in public outreach to highlight its role there.

“In the end, a big part of peace building is rebuilding trust between the people and the government,” Vinck said.

The DRC surveys were conducted by 76 interviewers drawn from local colleges. Pham and Vinck provided training for the interviewers, who then fanned out across the region for five weeks last November and December. They traveled to even the most remote part of the region, Shabunda territory, which can be reached only by air.

Interviewers were equipped with tablets containing software developed by Pham and Vinck, allowing them to collect data digitally and eliminate paper.

Security was a key concern, Vinck and Pham said, and researchers were instructed not to conduct interviews if it seemed that the situation would put the subject or the interviewer at risk.

The report was released in early September at a conference in the DRC. Vinck and Pham said they plan further studies, including an in-depth follow-up in a few years, as well as shorter polls to be conducted every three months over the next three years.