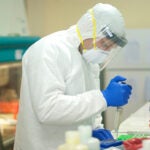 Dietary quality in the United States has improved steadily in recent years — spurred in large part by reduced intake of trans fat — but overall dietary quality remains poor and disparities continue to widen among socioeconomic and racial/ethnic groups, according to a new study from Harvard School of Public Health (HSPH).

“The study provides the most direct evidence to date that the extensive efforts by many groups and individuals to improve U.S. dietary quality are having some payoff, but it also indicates that these efforts need to be expanded,” said Dong Wang, lead author of the study and a doctoral student in the Department of Nutrition at HSPH.

Given changes in the economy, in policies related to nutrition, and in food processing since the turn of the century, the researchers decided to investigate recent trends in dietary quality in the United States. They also investigated trends in different socioeconomic subgroups because differences in diet can contribute to variation in the burden of chronic illnesses such as heart disease, diabetes, and cancer. Evaluating these trends is important to help guide public health policy and improve strategies to prevent nutrition-related chronic diseases, Wang said.

The average AHEI-2010 score increased from 39.9 in 1999-2000 to 46.8 in 2009-2010, and the researchers found that more than half of the gain came from reduced consumption of trans fats. The overall improvement in dietary quality reflects changes in consumers’ food choices and in the makeup of processed foods, and is likely the result of public policy efforts and nutrition education, the authors said.

They noted that the significant reduction in trans fat consumption suggests that collective actions, such as legislation and taxation, are more effective in supporting people’s healthy choices than actions that depend solely on individual, voluntary changes in behavior.

Other changes in eating habits also played a significant role in boosting dietary quality. People are eating more whole fruit, whole grains, nuts, legumes, and polyunsaturated fats, and they’re drinking fewer sugar-sweetened beverages, the study found. On the other hand, people did not eat more vegetables or less red and/or processed meat. And their salt intake increased — which the researchers found “disconcerting.”

Gap grows between rich and poor

These income-related differences in diet quality are likely associated with price (healthy foods generally cost more) and access (low-income people may have limited access to stores that sell healthy foods), the authors wrote. They also noted that education played a role: Dietary quality was lowest and improved more slowly among those who had had 12 years of school or less.

Among racial and ethnic groups, Mexican-Americans had the best dietary quality, while non-Hispanic blacks had the poorest. The lower diet quality among non-Hispanic blacks was explained by lower income and education. The authors speculated that Mexican-Americans’ better-quality diets may be due to dietary traditions or culture. Among all groups, women generally had better-quality diets than men.

“The overall improvement in diet quality is encouraging, but the widening gap related to income and education presents a serious challenge to our society as a whole,” said Walter Willett, Fredrick John Stare Professor of Epidemiology and Nutrition, chair of the Department of Nutrition at HSPH, and senior author of the study.