To speak out, or not 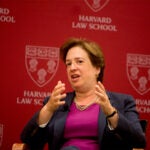 Professors wrestle with decision of when to discuss pressing public issues

It’s a question many faculty members wrestle with, no matter at what school or university they work: When should they speak or not speak about pressing issues?

Francis X. Clooney, S.J., professor of comparative theology and director of the Center for the Study of World Religions (CSWR) at Harvard Divinity School (HDS), recently received a media forum request to contribute ideas on what the Christian response should be to the upheaval in Iraq.

“My immediate sense was horror. I’d say, ‘I can’t do this. I can’t speak to this topic,’” said Clooney, but then added, “Often we’re expected — we have privileged positions, we have roles in universities — and are really being asked to step up and to use our positions to make the world a better place.”

Clooney used the anecdote to introduce the discussion on “To Speak or Not to Speak: When Should Professors Speak Out?” The panel, which included Harvard Divinity School faculty members Diana L. Eck, Charles Hallisey, Karen L. King, and Jacob K. Olupona, along with Ph.D. candidate Elizabeth Lee-Hood, spoke Tuesday evening to a packed room at the CSWR and teased out the tensions of the issue.

King, the Hollis Professor of Divinity, said that educators have a “democratic responsibility” to engage others on issues of concern and to attempt to raise the level of discussion about religion.

“Public speaking and public writing in the multitude of venues in which we’re asked to do that … I think of this as an extension of what we do as educators,” she said.

However, she cautioned that with Harvard University tied to a faculty member’s name, professors should think carefully about when and if they can speak outside their expertise. When speaking publicly, or to the media, King said she worries about how the insight she gives comes across.

“It’s not as though, in deciding to speak out, we get to decide how we’re heard, or even what our words are that are repeated, and how they’re repeated, and in what kind of context,” she said, adding that there is also a worry about a loss of complexity. “We’re complex thinkers, and we’re deep thinkers, and the media wants a sentence. They want the summary.”

Diana Eck, professor of comparative religion and Indian studies and director of the Pluralism Project, suggested people be selective about what they publicly comment on because of the influences of their backgrounds. She delved into her own background, which includes being a Montanan, a Methodist educated in the United States and India, a Christian by faith, a Harvard professor teaching about religious traditions in India and America, and so on.

“All of those things condition what I speak about, in what context, and why. And we do, in various ways, give voice to the diversity of experience and voice within ourselves, and we don’t exercise all of those voices at the same time, so we have to have a certain selectivity about what we speak out on and why and when,” she said.