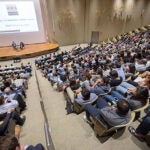 Catching the next wave

All that work by helicopter parents to whip their children into Ivy League shape is a fool’s errand that perpetuates a flawed educational caste system where high-achieving “zombie” students train diligently for elite careers, but learn little of value about life or themselves.

That’s author William Deresiewicz’s acidic assessment of top-tier universities, their students, and the admissions process. His contention has ignited widespread debate since an excerpt from his new book, “Excellent Sheep: The Miseducation of the American Elite and the Way to a Meaningful Life,” appeared in The New Republic in July. It is reportedly the most widely read piece in the magazine’s 100-year history.

A graduate of Columbia University who taught English at Yale, Deresiewicz based his book on ideas he first espoused in 2008. It has garnered praise from observers like David Brooks, the New York Times’ Op-Ed columnist, for raising important questions about the role that elite colleges and universities should play in shaping young lives, and the still-lagging effort to assemble an intellectually and socioeconomically diverse student body.

But the book also has drawn criticism from others who say it is sometimes gratuitously caustic and simplistic, painting everyone with a broad brush. Among the critics is Steven Pinker, the Johnstone Family Professor of Psychology at Harvard’s Faculty of Arts and Sciences, whose blistering rebuttal of Deresiewicz’ work also ran in The New Republic earlier this month.

“The book isn’t called, ‘Don’t Send Your Kids to the Ivy League’ or ‘Everything Is the Fault of the Ivy League,’ ” Deresiewicz said in an interview earlier this month from his home in Oregon, in advance of an appearance at Harvard Monday night. “Fundamentally, this is about the whole system that gets kids into the colleges, and even what happens to them afterward.”

He criticized an admissions process that he said overvalues credentials — standardized test scores, grade-point averages, and resume-padding extracurriculars — and undervalues smart but creative or offbeat students who haven’t mastered the art of hoop jumping and can’t afford to get expert help burnishing their resumes.

Deresiewicz said many students over the years have admitted, fairly cynically, that they know “education is a code to be cracked.” They defend their laundry lists of activities as evidence of their intellectual passion, a claim Deresiewicz views with a jaundiced eye.

“OK, maybe you chose the 12 [activities] you’re quote-unquote interested in, but that’s not the same as passion,” he said. “To me, a passion is something that seizes you so deeply that you don’t care about doing the other 11 things.

“As critical as I am of the students, they’re not really my targets. My targets are the people who make them who they are. It’s the schools that create the criteria, not the admissions officers per se, and it’s the crazy, upper-middle-class parents who insist on inflicting this on their children because they would fall into a bottomless abyss of disgrace if their kid didn’t get into Harvard.”

Deresiewicz lobbies for elite schools to return to emphasizing a thoughtful liberal-arts education, one that encourages students to find their passion, not their profession.

He also takes issue with the persistent scarcity of students from poor and blue-collar backgrounds at elite schools. While it’s laudable that Harvard provides at least 60 percent of undergraduates with some form of financial aid, he said, that still means 40 percent — too many, in his view — have enough money that they don’t need help.

“Listen, I think there are some very well-meaning people at Harvard and other schools, and they genuinely want to do something about this, and they’re genuinely trying, but this is the other reason why I say what we really need is free public higher education.”

Now on a book tour that includes several Ivy League schools, Deresiewicz came to Harvard Monday night to square off with students and faculty for a question-and-answer session convened by Homi K. Bhabha, director of the Mahindra Humanities Center at Harvard. “I’m going to those schools because I think they’re the ones that need to hear what I’m saying,” he explained of his visit.

Before a packed, tense Paine Hall, panelists including Harvard College Dean Rakesh Khurana; Diana Sorensen, the James F. Rothenberg Professor of Romance Languages and Literatures and of Comparative Literature and dean of arts and humanities at the Faculty of Arts and Sciences (FAS); Fawwaz Habbal, executive dean for education and research at the School of Engineering and Applied Sciences (SEAS), took aim at Deresiewicz’s depiction of college students as caricatures and disputed his view that universities must help students “build a soul,” not just train the next generation of leaders.

“What gives me pause, and what gives other people pause, is when you go on to fault us for failing to ensure that all of our students develop souls, and that they do so on a four-year schedule” that might be better called ‘No Soul Left Behind,’ ” said English Professor Amanda Claybaugh. “What happens when you try to institutionalize what should be a fundamentally individual process? And I wonder if you worry about — if we make it clear to our students that what we’re trying to do is help them build souls — does soul-building become yet another box to check for them?”

Bhabha told Deresiewicz that while he welcomed his frankness and support for the importance of the humanities, he found Deresiewicz’s view that students who go on to become bankers and lawyers are shallow careerists surprisingly “stereotypical” and amounted to little more than “finger-pointing and name-calling.”

“Why do you assume that bankers aren’t interested in soul-making?” asked Bhabha.

Khurana suggested that in this era of declining economic prospects, Harvard students and their parents reasonably worry about their future careers and that the University plays only one part in driving students’ choices and ambitions.

Deresiewicz said that careerism at Harvard is a problem that long predates the current recession. “Nothing that I’m describing started in 2008. I think the place where that argument is least valid is here,” he said. “Because fairly or unfairly … if you get out of here with a degree,” you’re quite likely to enjoy, at a minimum, a comfortable, middle-class life, he added.

“You may not be wealthy, but by any reasonable standard, the Harvard name is going to open any doors you want it to open.”