From awareness to action 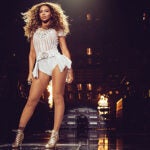 Anita Hill’s work isn’t done. In 1991, she started a national conversation about sexual harassment. Now, she says, it’s time for that conversation to move “beyond awareness to consequences” for harassment and gender violence.

October 1991 was, of course, the month of the Senate Judiciary Committee confirmation hearings for U.S. Supreme Court nominee Clarence Thomas. When Hill, then a law professor at the University of Oklahoma, stepped forward to give testimony regarding Thomas’ behavior toward her as her boss at the U.S. Department of Education’s Office for Civil Rights, the result was an uproar. The all-white, all-male Judiciary Committee’s cross-examination of Hill made her an instant hero to feminists and civil rights activists, while others vilified her.

At Harvard Law School’s (HLS) Wasserstein Hall on Wednesday, Hill, along with her legal adviser back then, Harvard Law Professor Charles Ogletree, and Nan Stein, senior research scientist at Wellesley’s Centers for Women, came together to view a screening of the 2013 documentary “Anita,” and to talk about what has changed since 1991 and what has not. The conversation and a follow-up question-and-answer session with audience members were moderated by former New York Times executive editor and current Harvard English Department lecturer Jill Abramson.

Over the 80-minute conversation, the panelists discussed a variety of topics related to sexual harassment, including domestic abuse, sexual violence on college campuses, incest, male-on-male harassment, the #yesallwomen social media movement, and the current controversy surrounding the NFL’s attitude toward domestic violence among its players.

“We didn’t know where the conversation was going” in 1991, said Hill. “But we have learned that we’re talking about a range of behavior. And at the root of that behavior is misogyny and violence.”

Hill, on sabbatical from her position as a professor of law, social policy, and women’s studies at Brandeis University, said she is currently doing work related to the thousands of letters she has received since the hearings. Watching the hearings, she said, women were “finding their own voices … They had struggled for years and years and years, and, viewing the hearing, they had a focal point.” The hearings made clear, she said, that “This is what inequality looks like.”

They also, she said, “allowed people to be very emotional about and very demonstrative about what harassment was like, how it felt, and why it was so terribly wrong.”

“Anita,” by Academy Award-winning documentarian Freida Lee Mock, was a stark reminder that in 1991 there was no working vocabulary for the topic of sexual harassment. In the film, the senators fumble awkwardly, with Republicans trying to discredit Hill’s testimony, while Thomas cows Democrats with the assertion that he’s the victim of a “high-tech lynching.” Thomas eventually was confirmed to the high court.

In one of the more touching moments in the film, Ogletree relates a late-night phone conversation he had with his then-12-year-old daughter during which she said, “Daddy, I believe Anita.”

“It took me out of that room,” Ogletree said after the HLS discussion. “It made me see the hearing in another context — that of my family, of my community, the world.”

Hill talked about various “entry points” in the evolving conversation about harassment, from the #yesallwomen movement to the video of NFL player Ray Rice punching his then-fiancée, and even the male-on-male harassment revealed in the culture of the NFL through its report on the Miami Dolphins.

“We’re trying inch by inch to move forward,” said Hill. “But I don’t think we’ve really taken the time we need to have a thoughtful effort to move us beyond where we were in 1991. How do we put all of those pieces together, all of that conversation, and move forward? … How do we take the conversation beyond just talk? We are at a point of awareness, but being aware of a problem is not a solution.”