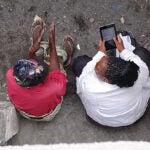 Voice of the brutalized

Scholar to give talk on Jewish identity and solidarity with Palestinians

Based on in-depth interviews with Jewish Palestine solidarity activists and a study of Jewish solidarity movements on social media, Atalia Omer demonstrates in “When Peace Is Not Enough: How the Israeli Peace Camp Thinks About Religion, Nationalism, and Justice” how refiguring alternative Jewish meanings of rituals, practices, and texts may emerge through solidarity with Palestinians and from contesting Jewish nationalism and Israeli occupation policies.

Omer, who received a Ph.D. from Harvard in 2008 and is currently associate professor of religion, conflict, and peace studies at the University of Notre Dame, will deliver the 2014 Dana McLean Greeley Lecture for Peace and Social Justice at Harvard Divinity School’s (HDS) Center for the Study of World Religions today at 5:15 p.m., in Andover Hall on the Divinity School campus.

In the Q&A below, she describes some of the challenges Jewish and Palestinian peace activists face and how their commitment to justice has inspired her.

HDS: Is there a common process to creating effective peacebuilding, or does each situation present its own unique approach?

OMER: There is no grand theory for peacebuilding, but we can reflect comparatively about various cases and identify similar patterns of types of conflict. It is crucial to have a contextual familiarity with the cultural, social, political, and religious complexities of each case.

One general approach that we advance at the Kroc Institute for International Peace Studies at the University of Notre Dame is articulated in the concept of strategic peacebuilding that advances an understanding of peacebuilding in an architectonic manner involving concurrent and multidimensional and multidisciplinary processes. More reactive focus on the cessation of “hot” or acute forms of violence by way of diplomacy, international law, and military do not preclude a deeper focus and cultural-educational work on building bridges. In effect, if those kind of activities did not happen simultaneously, the cessation of direct violence would have no lasting traction.

It is, therefore, necessary to work on addressing the root causes of conflict and work horizontally within the realm of civil society and social movements, as well as vertically on policy and leadership. Therefore, creating effective peacebuilding processes necessitates work in a multiplicity of spheres locally and globally.

HDS: What does the Jewish solidarity movement look like or involve? What kinds of conversations are happening?

OMER: There are various levels of Jewish solidarity work for Palestinian rights and struggles. Most of the people I interviewed are very young and under 30. There is, for sure, a generational divide within the landscape of American Judaism.

The young people I spoke to told me about their process of having to unlearn what they were taught growing up within various Jewish denominations. They tell me, in some respects, a story of loss and conversion. In many instances, Israel and a particular understanding of Zionism constituted essential parts of what it meant for them to be Jewish. For a variety of reasons, they experienced (usually while in college) a sense of cognitive dissonance and outrage about what is supposedly done in their name to the Palestinians. This process of outrage and dissonance is very much related to their understanding of Judaism as highly inconsistent with the practices of the Israeli nation-state.

What I have identified are the interesting ways in which they reimagine their Jewish identity outside the dominant reduction of it to Zionism. Usually in response to my question “What does it mean to be Jewish for you now?” they would valorize the diasporic, ethical commitment to stand with the underdog, and a humanist universalist reading of the experience of the Holocaust.

While many of them experience difficulties engaging in constructive conversations with their parents or broader circle, they find in one another a new community of support. Jews intersect with the broader Palestine solidarity movement, focusing primarily on raising awareness by way of challenging the domain narrative about the conflict and spreading the tactics of boycott, divestment, and sanctions. Likewise, they function to “certify” various Palestine solidarity activism against the accusation of anti-Semitism. But beyond their participation in solidarity work, their focus is on refiguring Jewish identity. This process involves rereading and innovating tradition in a highly relational manner.

HDS: During the course of your interviews with solidarity activists, what did they talk about as being the biggest challenges facing the peace process in the Middle East?

OMER: I have interviewed Jewish and non-Jewish Palestine solidarity activists, and in both instances the greatest interrelated challenges they identify were Israeli ethnocentric policies, especially manifesting in the continuous building of settlements and infrastructures of separation and containment, and the United States’ and other countries’ complicity with this reality.

All of the 100 interviewees employed the language of human rights and anti-colonial struggle in offering their analysis of the Israeli-Palestinian conflict. Many of them also discussed white privilege (whether their own or as a social commentary) and the need to connect the dots among various sites of injustice — from Islamophobia and militarism to anti-immigration policies, police brutality, and the legacy of settler colonialism and Euro-American involvement in the Middle East.

Whether the Jewish respondents participated in the contexts of secular organizations, such as Students for Justice for Palestine, or in specifically Jewish organizations, such as Jewish Voice for Peace, they arrived to their sense of outrage about Israeli policies and solidarity with Palestinians through a process of critiquing the dominant articulation of the relation between Jews and Israel.

This critique is often the outcome of a substantive learning about Zionist and Israeli history and its ramifications to Palestinians. It is also about reinterpreting Jewish identity. Thus, Jewish Palestine solidarity work moves beyond the scope of non-Jewish Palestine solidarity activism. It is centrally about internal Jewish contestations: what is done in my name and what should not be done in my name and why and how can my response be informed by my understanding of the Jewish tradition and my identity as a Jew.

HDS: Israel recently announced a land appropriation in the occupied West Bank that an anti-settlement group termed the biggest in 30 years. Does this move threaten to undermine some of the work of the people you’ve had conversations with regarding the goal of a two-state solution with Palestine? Has that goal shifted at all in recent years?

OMER: Israeli settlement policies have made the possibility of a viable contiguous Palestinian state very slim within the current framework of engagement. Many of my interviewees recognize that and imagine that the Palestinian struggle will shift to the area of civil and human rights rather than national self-determination.

HDS: You have written that the academic study of religion has struggled to attain public relevance, yet you believe that a “context-specific focus on conflict analysis and peacebuilding can provide an entry point for such relevance and applicability.” Can you explain this a bit more? What do you mean by “content-specific focus”?

OMER: In my effort to bridge the interdisciplinary complex of peace studies with religious studies, I make the argument that the academic scholarship of religion can embolden its public relevance by contributing nuances for both the task of conflict analysis and for processes of peacebuilding. This potential, from my perspective, becomes especially acute in reference to conflicts involving explicit ethnoreligious national entitlements, claims, and grievances.

Religion intersects in highly complex ways with national and ethnic identities. Religious scholarship can broaden the ways in which we understand this complexity.

In my work on Israel and Palestine, I develop the interrelated notions of a hermeneutics of citizenship and a multiperspectival approach to justice. The point about the multiperspectival lens illuminates the response to your question concerning the “context-specific focus.”

Jewish peacebuilding, in other words, must be confronted centrally by the narratives of the Palestinians, and this confrontation needs to inform internal contestations concerning the Jewish meanings of Israeli citizenship and membership.

In my earlier work, I looked at hybrid groups such as the Arab-Jews and Palestinian-Israelis and asked how they can constructively offer resources to reframing a context that posits the two terms of their hyphens as binaries.

HDS: On a personal note, during your interviews and research, was there anything you learned or discovered about yourself that surprised you?

OMER: Talking to these young, committed individuals has generated in me a sense of hope despite the general despair. These young people are nuanced, sophisticated, and highly committed to justice. It is inspiring.