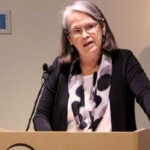 To speak out, or not

As President Obama made his case for deepening U.S. military involvement in Syria and Iraq and the country prepared to mark the 13th anniversary of the 9/11 terrorist attacks, scholars from Harvard Kennedy School (HKS) and Harvard Law School (HLS) came together to explore the circumstances surrounding the recent upheavals in the Middle East and the complex forces driving the many strategic challenges to peace.

In a Tuesday panel moderated by HLS Professor Noah Feldman, Nicholas Burns, Michael Ignatieff, and Meghan O’Sullivan assessed the global threat now posed by the Sunni jihadist group known as the Islamic State of Iraq and the Levant (ISIL). The Obama administration, the United Nations, and others use the term to reflect the organization’s growing size and danger to eastern Mediterranean nations including Israel, Lebanon, Jordan, and southern Turkey. Many media outlets refer to the group as ISIS, or the Islamic State of Iraq and Syria.

The panel considered the difficult choices available to the United States in trying to halt the group’s spread.

“The president has been avoiding any kind of action in Syria and of course, he got us out of Iraq — that’s why he ran for president in 2008. And in a Shakespearean kind of way, he is inevitably being now dragged back into it. He has no option but to go before the American people … and say ‘We have to lead in Iraq, but at some point we’re going to have to lead in Syria.’”

O’Sullivan, who served as special assistant to President George W. Bush and also as deputy national security adviser for Iraq and Afghanistan, was skeptical of an effective arms-length strategy.

“I think if we are to come under the impression that we can contain ISIS as it is by some tactical bombing and arming the Kurds and trying to build up the Iraqi army over the long term, I think we’re kidding ourselves,” said O’Sullivan, the Jeane Kirkpatrick Professor of the Practice of International Affairs and director of the Geopolitics of Energy Project at HKS. “We’ve heard from every U.S. intelligence and defense official over the last few weeks that ISIS is a much more formidable opponent than AQI — al-Qaida in Iraq — was,” she said. “That is not going to be sufficient and it is certainly not medium-term strategy.”

“I can see humanitarian reasons to be engaged, but only strategic reasons will keep us involved and unless we can find the ground troops to do the work, ISIL is there for a long time,” said Ignatieff, the Edward R. Murrow Chair of Press, Politics, and Public Policy at HKS and former leader of Canada’s Liberal Party.

“One of the things that we have to understand is we’re dealing with an enemy with an absolute mastery of 21st-century social media, an absolute master of the propaganda of atrocity, and a deep strategic understanding of the military uses of atrocity. If you engage in these barbaric acts, it makes it much easier to control swaths of territory with small numbers of people. If you’re extreme in everything you do, it has a military and strategic value. It’s abominable, it’s disgusting, but it’s extremely effective,” he said.

Complicating any action today are the many missteps by the Obama and Bush administrations over the last two decades, the panelists said.

“The president’s major problem is that he’s not taken seriously in the Middle East by authoritarian dictators because when he drew the line and dared Assad to cross it, and Assad crossed it twice, the president punted to Congress,” said Burns. “And it has really harmed the credibility of the United States. So I think a tough-minded realist might say we’ve got to act militarily, through the air, in order to build back up that credibility to be able to do the things the three of us have been talking about.”

“I think the United States is in the middle of a very difficult re-evaluation of its role in the world consequent upon Iraq,” said Ignatieff. “Part of the challenge of thinking about the Middle East is to learn from the lessons of failure. Clearly invading a large and proud Arab country with a lot of troops and trying in a very short period of time to build stable institutions and then coming home didn’t work very well at all. But the alternative, which is to give a lot of speeches and walk away, seems to me to draw the wrong lesson from failure.”

O’Sullivan attributed much of the ongoing unrest in the region to internal failures.

“A big part of the crisis in the Middle East which not only manifests itself in ISIS but also in some of the other crises/dysfunction we’re seeing is the failure of the centralized state in large parts of the Arab world, the failure of the state to actually deliver to citizens, to deliver to them economically, in some cases educationally, but really the failure to deliver opportunities for a better future.”

The panel also touched on Obama’s handling of nuclear talks with Iran and addressed the renewed violence in Gaza and the dimming prospects for peace between Israel and Palestine following the rejection by both sides of a plan brokered by Secretary of State John Kerry.

“Clearly a historic opportunity was missed that would have, had it been successful, reduced Israel’s isolation, increased the separation, isolated Hamas still further, and I think in the context of the Middle East, would have been the right thing to do,” said Ignatieff. “And I just don’t know when that train is coming back into the station.”

The Harvard Hillel event was the first in a new series, “Riesman Forum on Politics and Policy,” co-sponsored by the Department of Near Eastern Languages and Civilization and the Harvard University Center for Middle Eastern Studies.