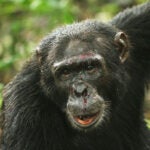 From whales to larvae, common principles at work in water propulsion, study says

At nearly 100 feet long and weighing as much as 170 tons, the blue whale is the largest creature on the planet, and by far the heaviest living thing ever seen on Earth. So there’s no way it could have anything in common with the tiniest fish larvae, which are mere millimeters in length and tip the scales at a fraction of a gram, right?

Not so fast, says L. Mahadevan, the Lola England de Valpine Professor of Applied Mathematics, of Organismic and Evolutionary Biology, and of Physics.

Using simple hydrodynamics, a team of researchers led by Mahadevan was able to show that a handful of principles govern how virtually every animal — from the tiniest fish, to birds, to gigantic whales — propel themselves though water. The study is described in a paper in Nature Physics this month.

“What we wanted to investigate was how the speed of an organism changes as a function of how large it is, how quickly it moves, and how much it moves,” Mahadevan said. “To resolve that in detail, however, is very complex, because there are a great deal of differences in morphology and what parts of the body different creatures use to swim. The question is: Is there anything in common across all these organisms? The answer, we found, is yes.”

In an effort to uncover those common principles, Mahadevan, working with a postdoctoral fellow in his group, Mattia Gazzola, and a colleague from the University of Nice, Médéric Argentina, began by trying to unpack the physics of how different creatures swim.

“The traditional approach to swimming phenomena is to take a certain specimen and accurately characterize it via experiments and/or simulations, and try to generalize from there. But it is very hard to strip out specific biological effects from general principles,” Gazzola said. “We instead thought that while swimmers exhibit a huge diversity in shapes and kinematics, at the end of the day they all live in the water.

“Therefore, we thought that if a unifying mechanistic principle existed, it had to lie in the constraints that the flow environment poses to all its inhabitants,” he continued. “And this is a purely physical problem, much easier to solve, since it is not affected by biological vagaries. What I like about this paper is that in one line of algebra we derived a compact formula that accounts for 50 years of experiments. This is an example of how powerful minimal modeling can be.

“The basic relationship we wanted to understand was how the input variables — namely the size of the organism, the amount an organism moves, and how quickly it moves — control the output variable, which is effectively the speed at which it moves,” Mahadevan explained. “What we found is that there is a specific relationship, which can be described by in terms of a simple scaling law with two limits.”

The first, which corresponds to creatures moving at intermediate speeds, describes situations where the bulk of the resistance is caused by skin friction, because water “sticks” to the organism’s body. At faster speeds, Mahadevan said, the resistance organisms face comes largely from pressure that builds up in front of and around them, which is described by the second limit.

“While it wasn’t a surprise that the resistance changed as organisms moved faster, the fact that those challenges could be so simply described was interesting and provocative, because we are talking about organisms that range in size from a few millimeters to the size of a blue whale,” Mahadevan said.

Armed with those observations, Mahadevan and colleagues turned to a host of empirical observations that had been made over the past 50-plus years. When the data were plotted on a graph, the researchers found that the swimming speed of virtually every organism, from fish larvae to frogs to birds and even whales, could be described by one of the two equations.

“What is particularly interesting is that all the organisms essentially reach the hydrodynamic limits of performance,” he said. “Our simple theory, which doesn’t distinguish in any detailed way between something like a blue whale and fish larvae — except in the parameters of how large you are, how much you move, and how quickly you move — can describe all this diversity. That suggests there are general principles at work here.”

Mahadevan is also the Audrey, Fay, Katherine, and Megan Shutzer Fellow for Science at the Radcliffe Institute for Advanced Study for 2014-15.