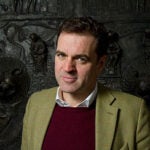 Five weeks after a white police officer shot and killed an unarmed African-American teenager, Michael Brown, in Ferguson, Mo., ripples from the shooting and the ensuing days of angry public protests continue to radiate nationally.

While the nightly standoffs and news coverage have ended, a panel convened by Charles J. Ogletree Jr., the Jesse Climenko Professor of Law at Harvard Law School (HLS) and director of the Charles Hamilton Houston Institute for Race & Justice, reflected on what Brown’s death, and the crisis that followed it, means for broad policy issues, including racial discrimination, political disenfranchisement, policing, and the criminal justice system. The panel met Wednesday night at Harvard Kennedy School (HKS).

“I’m not alleging any type of conspiracy. Just know that many people — minority and majority — think something is terribly wrong,” said the Rev. Ray Hammond ’71, M.D. ‘75, A.M. ’84, the founder and pastor of Bethel African Methodist Episcopal Church in Boston and co-founder of Ten Point Coalition, a clerical and lay group that helps resolve challenges facing black young people.

Brown’s killing prompted widespread outrage and protests over what many critics said was the routine mistreatment of Ferguson’s predominantly black residents by its mostly white police force. Law enforcement attempts to disperse the demonstrations using military-grade weapons and tear gas fired from armored vehicles prompted U.S. Attorney General Eric Holder to open a federal civil rights investigation into the shooting. The Justice Department is also investigating possible misconduct in the local police department and will launch a study of racial bias in law enforcement nationwide.

“Ferguson presents a textbook case for how not to build harmonious” relationships, particularly between law enforcement and the black community, said Hammond.

Building those strong relationships is critical and could have prevented the crisis that erupted in Ferguson, said Lee P. Brown, the first African-American police chief and later mayor in the city of Houston, and the first black police commissioner in New York City. Brown is widely considered the architect of “community policing,” a law enforcement strategy that emphasizes building trust between police and citizens through daily engagement to better head off or solve crimes, and to develop effective, respectful solutions to ongoing issues.

If community policing had been in place in Ferguson, “First, the officer would have known Michael Brown,” Hammond said. “Second, if the shooting did take place, the people would not immediately conclude that the police are wrong … In community policing, every officer must understand that they are part of — and not apart from — the community they serve. With that understanding, the people are seen as allies and not targets.”

The panel agreed that the starkly low rate of voter registration and participation among Ferguson’s African-American residents is a major reason why African-Americans are underrepresented in local government and on the police force. It’s a fact that can and must be changed, they said.

While both white and black residents of Ferguson gave the media low marks for coverage often tainted by sensationalism, sloppy reporting, and inappropriately emotional commentary, there were some bright spots that have positive, long-range implications, said Alex Jones, director of the Shorenstein Center on Media, Politics and Public Policy at HKS.

Much like the catalyzing role the media played during the 1960s Civil Rights demonstrations that shamed the nation into reform, the shocking images of police militancy in Ferguson brought home the importance and urgency of these issues for many people who had been previously unaware of them.

Jones said the press brought a new policy issue — the militarization of American police departments — to the nation’s attention, and vital “new media” outlets such as Black Twitter entered the wider public consciousness.

“It is a powerful new tool for black people to speak to each other and, therefore, to speak to us all,” he said.