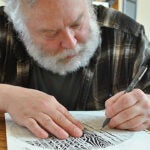 Aldel Brown grew up just a 20-minute drive from Harvard’s campus, but attending the University seemed like distant possibility. Yet this year Brown — who regularly describes himself as “just a kid from Boston” — has arrived as a member of the Harvard Law School (HLS) Class of 2017.

“As far back as second grade, I’ve wanted to go to law school, and attending HLS is a dream,” he said. “I always felt that there were wrongs in the world, and I wanted to help solve those problems. So I was always thinking about the law. It was something I always wanted to pursue.”

While Brown’s future lies in a courtroom, his past is rooted in two other courts: basketball and tennis. From a young age, he played both sports in neighborhoods all over Boston.

Taking tennis lesson in the summers and after school, and playing basketball after tennis lessons, Brown’s prowess in both games flourished. Tennis taught him self-reliance and focus, while basketball emphasized the importance of teamwork and collaboration.

When his mother signed him up for Tenacity, which emphasizes success both on the tennis court and in the classroom, Brown realized he could go even further.

“I received free tutoring and free tennis lessons at the Reggie Lewis Center in Roxbury,” he said. “That was a great place to meet new people, play tennis, and also finish my homework in a controlled environment. That experience helped me interact with different cultures, personalities, and ethnic groups through the games of basketball and tennis. You have kids coming from the suburbs and playing kids from the city, and vice versa.”

That diverse experience gave Brown insight into how to reach his potential, and his first introduction to Harvard. Tenacity runs tennis clinics at the University, bringing local kids to the campus at an early age.

A strong familial focus on education also resulted in Brown attending St. Mark’s School in Southborough, Mass., where he played on the tennis and basketball teams and captained the tennis team as a senior. He enrolled at Howard University in 2008. It was during his sophomore year, while completing a two-semester internship in Washington, D.C., that his passion for education reached the next level.

Working as an administrative clerk with the U.S. Department of Justice’s natural resources section, and interning with U.S. Rep. John Conyers of Michigan, Brown began writing speeches for the congressman and working with constituents in his district.

“I was able to meet a diverse set of working-class professionals who were as passionate about education as I was,” Brown said. “We collaborated on creating a charter school, the Shining Stars Montessori Academy Public Charter School, in D.C. I helped write the school’s charter in 2010, and we opened our doors to 54 students during the fall of my senior year, in 2011.”

After graduating from Howard in 2012, the school’s board approached Brown to become Shining Stars’ executive director, when he was only 23.

“It was an amazing experience,” he said. “Being responsible for the education of over 80 kids, meeting the responsibilities and duties laid out in the charter, it was a blessing that brought me to tears. It was an incredible challenge and afforded me the chance to push myself harder than I’d ever imagined.”

Now vice chair of the board of trustees for the school, which will have more than 120 students this year, Brown said he hopes to one day be involved at the macro level by writing legislation to encourage equal opportunities and access to education for all students. Attending HLS, he said, is a crucial part of that goal.

Brown also plans to volunteer with Tenacity, the program that first brought him to Harvard’s campus, while he earns his law degree, teaching tennis to Boston schoolchildren at the Murr Center on Monday nights.

“I really wouldn’t be here if it weren’t for all these pieces coming together,” Brown said. “Playing basketball, being part of Tenacity, going through the charter school experience — those experiences are ingrained in me now, and they’re the fuel for me being at HLS. Coming back home and having this great opportunity in my hometown for the next three years … everything’s come full circle.”