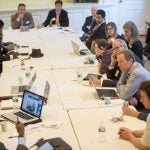 Researchers find that sperm benefit from grouping together in mice

Everybody knows the shortest distance between two points is a straight line, and now Harvard researchers have evidence that sperm have been taking the familiar axiom to heart.

Though competition among individual sperm is usually thought to be intense, with each racing for the chance to fertilize the egg, Harvard scientists say that in some species, sperm form cooperative groups that allow them to take a straighter path to potential fertilization.

A new study, conducted by Heidi Fisher, a postdoctoral student working in the lab of Hopi Hoekstra, the Alexander Agassiz Professor of Zoology in the Museum of Comparative Zoology, and postdoctoral student Luca Giomi, who works with L. Mahadevan, the Lola England de Valpine Professor of Applied Mathematics, professor of organismic and evolutionary biology, and of physics, shows that in Peromyscus maniculatus, a species of deer mouse known to be promiscuous, sperm clump together to swim in a more linear fashion. The study is described in a July paper in Proceedings of the Royal Society B.

“We generally think that each individual sperm cell swims its little heart out to get to the egg. But it had been discovered that, in at least a handful of organisms, sperm will cooperate and swim as a group,” said Hoekstra, who is also a professor of organismic and evolutionary biology.

Exactly why sperm clump together, however, had remained a mystery — until now.

“We had some hints that cooperation was enhancing their swimming performance, but what we didn’t understand was how it was helping,” Fisher said. “With this study, we combined a mathematical model with much finer-scale measurements that looked at groups that ranged from single sperm cells to groups of as many as 30 cells. What we realized was that that while their overall speed wasn’t increasing at all, that the time it took them to go from point A to point B was decreasing — they swim in a straighter line.”

The study also found that sperm from promiscuous mice were likelier to form clumps of the optimum size, and that, when compared with sperm from Peromyscus polionotus — a closely related, but monogamous, species of mouse — the trait is likely driven by sexual selection.

The new paper builds on a 2010 study conducted in Hoekstra’s lab, which found that sperm cells preferentially clump with those produced by the same male. Spurred by that earlier paper, Mahadevan approached Hoekstra with the idea of creating a mathematical model to understand whether and how sperm received an advantage by forming groups.

“I read the paper and thought we could make a quantitative theory of the observations they had made,” he said. “But of course, the only way to know whether any model was capable of anything predictive was to make it testable.

“In this context … the question was: Is it possible to make the aggregate do better than the individual?” he continued. “One way to do that is to get all the tails to synchronize, but that doesn’t happen. The other way is to cancel out the random motion of the individuals in an aggregate because the sperm adhere to each other. Eventually, for large aggregates, the sperm point toward each other and thus cannot swim at all. This mechanism, when quantified in a model that Luca and I developed, led to testable predictions. When Heidi did the experiment, we found that this was essentially correct.”

In addition to finding that sperm that band together swim in a more linear fashion, researchers identified the clump size at which sperm reaped the largest reward for grouping. Groups with too few cells, Hoekstra said, continued to swim along more meandering paths, while sperm in over-large groups often ended up swimming against each other.

“What we found is that both species have an optimum at around eight, which was what the model predicted, but there were fewer groups that were too big or too small in the promiscuous species,” she said. “That is consistent with the idea that sexual selection is driving this trait in the promiscuous species, whereas in the monogamous species, where there’s not as much competitive pressure, things are a bit more relaxed, so we see more variance in the clump sizes.”

In the end, Mahadevan said, the study represented an ideal collaboration between the theoretical and the empirical.

“If you talk to evolutionary biologists, their approaches are often genetic, because they’re trying to understand what the genetic bases are for natural selection pressures,” he said. “From a theoretical point of view, the focus is on reproductive capacity. What’s interesting in this particular situation is we can take a question of reproductive capacity and add a physiological twist to it that’s associated with sperm motility, and then we can take that apart in the context of what happens when you change the shape of the sperm, or their ability to adhere to each other, or their ability to move.

“In my view we haven’t so much answered the question as we’ve sharpened it,” he continued. “And we’ve done by that couching a conceptual notion of competition and cooperation in terms of physical and physiological variables that can be measured and lead to testable predictions.”