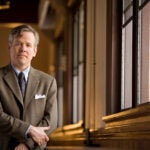 After more than two decades under the leadership of Allan “Bud” Selig, the owners of the 30 Major League Baseball teams last week elected Robert Manfred as the 10th commissioner in the history of the game. Currently the league’s chief operating officer, Manfred, J.D. ’83, bested television executive and Red Sox chairman Tom Werner, ’71, for the top job. Manfred will assume the post in January following Selig’s retirement.

He made his name in the league in the late 1980s, working on labor relations, including collective bargaining and revenue sharing. He served as outside counsel for MLB during the disastrous 1994-1995 players’ strike, joined the league’s management in 1998, and rose through the ranks as a trusted Selig lieutenant. Manfred was lead negotiator during the 2002, 2006, and 2011 contract talks, and in 2002 he was instrumental in getting the players’ union to sign off on the game’s first mandatory drug testing agreement, now considered the toughest policy among the four major professional sports.

In one of the first interviews since his election, Manfred spoke with the Gazette by phone about the challenges facing baseball and his vision for the future of the game.

GAZETTE: When you were at HLS, did you ever envision that you would become the 10th commissioner of Major League Baseball?

MANFRED: I was a summer associate at Morgan Lewis in Philadelphia during the summer of 1981 after my first year. And there was a long baseball strike that summer, and I could remember laughing with the guys in the law firm that “I like my labor relations and my sports separate.” I’ve always been a huge baseball fan, but I really did not think that I was going to have a career in sports.

GAZETTE: Which team did you grow up rooting for?

MANFRED: I grew up a Yankees fan.

GAZETTE: So should Red Sox fans be worried: Not only did their guy [Werner] lose, but there will be a Yankee fan in charge?

MANFRED: [Laughs] I’ve moved into a state of “permanent neutrality” is the way I’d put that.

GAZETTE: Prior to your selection, much of the media speculation concerned whether the owners would remain loyal to Commissioner Selig and vote you in as his hand-picked successor, or get behind Chicago White Sox owner Jerry Reinsdorf, long vocal about his desire for baseball to institute a salary cap and about his dissatisfaction with the league’s revenue-sharing arrangement. Reinsdorf reportedly had assembled a small faction of owners backing Werner, his preferred candidate. What do you say to the claim that you’re not tough enough with the MLBPA [Major League Baseball Players Association], and what ideas did you put forward during your presentation to the owners about how you would lead the game?

MANFRED: I don’t want to get into a lot of the campaign back-and-forth. That part of the process is over, and I’m really focused on working with all 30 clubs. What I will say to you about labor is: I think for the vast majority of clubs, my experience in the labor-relations area, the agreements that I’ve negotiated for baseball during the time that I’ve been there, were a positive in terms of my selection.

The only thing I would say to you, because it’s really a carry-over idea and it’s relevant to what I’m doing today, is Commissioner Selig has had a number of us working on a project to try to increase youth participation in baseball as a long-term mechanism for growing the game. I’m actually on my way to Williamsport [Penn.] now to go to the Little League World Series. I think my ability to talk about our findings with respect to youth participation and some of the ideas that we’ve developed along with Commissioner Selig for encouraging youth participation was a big positive in the process.

GAZETTE: You’ve been at the forefront of baseball’s labor and drug-testing program, but some of the biggest obstacles facing the league today are marketing-related: sagging television ratings, stagnant ballpark attendance, and a “graying” fan base. What should be done to reverse these trends?

MANFRED: I have a more optimistic view of the state of the game. I think it’s important to remember that 150 million people go to watch professional baseball games worldwide each year. It is the most-watched professional sport, and when you talk about just that absolute number of people who go watch professional games, I think it is testimony to the fundamental quality of the product. Does that mean that we don’t need to work really hard to remain competitive in an increasingly competitive entertainment market? No, but there are fundamentals about this game that are absolutely phenomenal. Another one is our digital business, MLB.com, is a tremendous asset for this industry as it moves forward. Not only is it widely recognized to be the best digital operation in professional sports, but it’s a great vehicle for making sure that we capture younger audiences as we move forward. I really do think that the game presents a great opportunity for growth. It’s really well positioned to grow going forward.

GAZETTE: So those fears are overblown? I think people compare it to the NFL and say it’s not doing as well and that the trends are going in the wrong direction in terms of revenue and popularity.

MANFRED: The last time I looked, 73 million people a year didn’t pay to go see NFL games in the United States. It’s how you interpret numbers. There are challenges. Like most TV audiences, our audience is getting older, and I think that we have some great ideas about things that can be done with the game to help on that front. I’m not Pollyannaish about the fact that there are challenges out there. I just think the picture you paint is a little bleak.

GAZETTE: Baseball gets criticized for being a slow game, one that not only doesn’t match the speed of football, basketball, and hockey, but also the speed of modern life. In light of the ratings decline, are there any plans to improve the pace of play?

MANFRED: Commissioner Selig has been focused on the issue of pace of game for a number of years. I think that moving forward, we’ll continue to look at the pace of the game, how we can make it quicker, things that can be done to make sure that there’s sufficient action in the game, and the absolute length of the game is obviously a third piece of it. And then, I also think that what we do both in the ballpark and in our broadcasts surrounding the core play of the game is very important in terms of keeping the product as appealing as possible. So, yes, I do think pace is an issue that we will continue to focus on.

GAZETTE: The current MLBPA collective-bargaining agreement expires at the end of the 2016 season. What issues do you expect will dominate those negotiations? How soon do you start preparing for those talks?

MANFRED: We’re doing staff work already. I think that by spring we’ll have appointed a labor-policy committee of owners, and the pace of that preparation will pick up. Right now, I think the issues surrounding amateur talent acquisition will be important, whether we go all the way to an international draft, whether it’s a single worldwide draft or a domestic and an international draft. I think those issues will be important, and I think they’ll be important because probably the most dominant trend in the game right now is that people are winning with younger players, and when people win that way they’re going to be interested in talent acquisition.

GAZETTE: So where is the best young talent coming from?

MANFRED: The hottest trend in players right now is Cuba. And that really has to do more with the political situation than anything else. More and more players are leaving Cuba, and it is a source not only of talent, but of fairly polished professionals. That’s a new frontier for us right now.

GAZETTE: You served as outside counsel to the league when players went on strike in 1994-1995. Since then, MLB has been the only major sport to avoid a labor disruption. What did you learn from that experience?

MANFRED: Well, look, a 232-day strike does teach you in very graphic terms about the cost of the application of economic leverage. Great damage was done to the game, both to players and clubs during that strike, and it’s a lesson you don’t forget easily.

GAZETTE: You’ve been very active in helping HLS students gain clinical experience in sports law. How did that come about, and what kinds of things do they learn about the practice?

MANFRED: I think that the young people whom we’ve had … benefit from the fact that, particularly our labor group, is as strong a group of legal professionals as you’ll find anywhere. Fortunately or unfortunately, we have a tremendous number of difficult, cutting-edge legal issues, and I think that provides law students with a great opportunity to see an alternative to big-firm practice, to see a place that you can go, have challenging issues, and address them in an environment that’s really exciting.

MANFRED: Commissioner Selig has reminded me early and often that governance of baseball is about the clubs, and that you always need to make sure that you’ve got great communication going with the clubs so you understand where your constituents are. And believe me, I will follow that advice as I move forward.