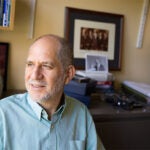 It’s May 3, 1971, early morning. A small, shaggy group of young reporters, most barely experienced, fans out across Washington, D.C., Sony TC-100 tape recorders in hand. The assignment: to cover a local demonstration.

Coalescing not far from their offices, a group of 20,000 Vietnam War protesters calling itself the Mayday Tribe, a few armed with bricks, bottles, and stones, were intent on shutting down the U.S. government. The group marched through the city streets on an inevitable collision course with the 5,100 police officers, 1,400 National Guardsmen, and 8,000 Army regulars poised and ready to stop them. Military helicopters buzzed overhead as police sprayed tear gas to control the crowds. With 7,000 put under arrest, the fields surrounding Robert F. Kennedy Stadium were transformed into holding pens.

What transpired next would make history — not just the protest, which turned out to be the largest demonstration against the Vietnam War in the nation’s capital, but the bold, inspired “insanity” that resulted: a radical, 21-minute audio documentary capturing the chaotic sounds, reporters’ eyewitness accounts, and on-the-fly interviews with protesters, police, and workers all hastily stitched together and broadcast that afternoon on the debut of a news show called “All Things Considered” on a network barely a month old by the name of National Public Radio.

To jam such an unwieldy piece ― epic by typical radio standards ― into the allotted timeslot, a planned story about the 1971 Pulitzer Prizes, which had been awarded earlier that day, was spiked. An ad placed in The New York Times succinctly summed up the fledgling organization’s counterculture sensibility. “The radio revolution begins at 5: NPR.”

“The program was a contraption hammered together from disparate ingredients, a vibration from a realm where youthful earnestness commingled with merry-prankster lunacy, land-grant university idealism, New England pragmatism, and a native instinct for storytelling,” journalist Steve Oney writes of “All Things Considered” in a recently published excerpt from his forthcoming book on the tumultuous birth and evolution of NPR.

A veteran author and magazine writer for Esquire, GQ, and others, and a 1982 Nieman Fellow, Oney, 60, had two years of research under his belt when he arrived as a Spring 2014 Fellow at Harvard Kennedy School’s Shorenstein Center on Media, Politics, and Public Policy to begin writing NPR’s “foundation story,” one that includes the triumphs and tribulations of its first visionary leader, Bill Siemering.

“I love David McCullough’s books, I love Gay Talese’s book on The New York Times, ‘The Kingdom and the Power.’ I love books that look at big institutional American forces that try to find the humanity behind these institutions,” said Oney from his home in Los Angeles. “It’s a history animated by some fabulously interesting and quirky people who do very, very good work under pressure and generally subscribe to the highest ideals about journalism and storytelling.

“I’m trying to get at the human drama, the conflict among people who worked there that is dramatic. What interests me is the dynamic of a bunch of people coming together from different parts of the country and the world every day to make this something out of nothing,” he said.

Part of the last gasp of President Johnson’s Great Society program, the Corporation for Public Broadcasting was formed in 1967 by an act of Congress. Publicly funded radio, by then seen by many as a medium in decline compared to television, was something of a begrudging afterthought tucked into the legislation.

The board had asked Siemering, a Midwesterner known for his educational and public-affairs programming expertise, to write a mission statement for the new network. He would produce a tour de force document that read like a cultural manifesto and got him the job of NPR’s first programming director, creating “All Things Considered” and setting the network’s defining audio and storytelling aesthetic.

“You’ve got to remember what radio sounded like in 1971. It was all the equivalent of ‘Headline News.’ Every story was 30 seconds long; it was a loud, grating wasteland, and the news broadcasters spoke as this voice of God authority. [They] talked down to people,” said Oney. “Siemering wanted his on-air personalities to talk to people. He hired people based on the depth and the quirkiness of their personalities, as opposed to the static quality of a resume. He was willing to take a chance on somebody who was interesting.”

From that first class of interesting unknowns came legendary NPR figures such as Susan Stamberg, Linda Wertheimer, and Jeff Rosenberg.

“He heard what NPR would sound like and then he hired the people who he thought could articulate what he heard,” Oney said.

The next section of the book, Oney says, will chronicle Siemering’s unceremonious dismissal less than two years after NPR’s auspicious launch and the subsequent shambolic five-year reign of Frank Mankiewicz. A charismatic, larger-than-life journalist with a Hollywood pedigree, Mankiewicz had served as press spokesman for Robert F. Kennedy and managed George McGovern’s doomed 1972 presidential run. It was Mankiewicz who created stalwart shows like “Morning Edition” and encouraged correspondents Cokie Roberts and Nina Totenberg to cover politics and legal affairs, respectively.

“He’s the one who really put NPR on the map, who transformed it from being a slightly under the radar, touchy-feely … kind of enterprise to a tough, daily news operation,” said Oney. “He accomplished all this by the force of his personality and his connections. And then near the end of his tenure, NPR ran into horrific financial problems and nearly went out of business.”

Oney was drawn to the subject because of the characters involved, but also because of NPR’s distinctive voice, which reshaped radio and broadcast narrative styles.

“To have an interesting voice tell you a story is, for me, a very seductive thing. NPR has some great voices,” he said. “Being alone in the presence of a good storyteller — it’s an extension of the oral tradition, really — it’s a powerful thing to sit and be told a story.”

Those first “seat of the pants” broadcasts, while exciting, weren’t entirely well received or respected.

“A lot of people thought it was messy. They thought it was not tightly formatted enough, it was all over the block. And the first couple of years were indeed ragged. There was a lot of stuff on there that was embarrassing, and everybody involved would tell you that,” said Oney, who spent time during his fellowship sitting in the NPR archives at the University of Maryland digging through cardboard boxes and listening to old tape reels.

But perfection was never the end game. “NPR was willing to be foolish and willing to make mistakes coming out of the gate. And NPR took its time and stumbled toward a very admirable-sounding goal,” he said.

“It’s a big part of the American culture, and I’m just hoping that I can make it all come alive on the page.”