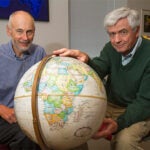 Studies begun by Harvard Stem Cell Institute (HSCI) scientists eight years ago have led to a report published today that may be amount to a major step in developing treatments for amyotrophic lateral sclerosis (ALS), also known as Lou Gehrig’s disease.

The findings by Kevin Eggan, a professor in Harvard’s Department of Stem Cell and Regenerative Biology (HSCRB), and colleagues also has produced functionally identical results in human motor neurons in a laboratory dish and in a mouse model of the disease, demonstrating that modeling the human disease with customized stem cells in the laboratory could relatively soon eliminate some of the need for animal testing.

The study, published today in Science Translational Medicine, suggests that compounds already in clinical trials for other purposes may be promising candidate therapeutics for ALS.  The Harvard authors found that genetically intervening in the pathway that these drugs act on increased survival time of an ALS animal model by 5 to10 percent. While that is a long way from curing the universally fatal neurodegenerative disease, “any ALS patient would be excited about this extended life span,” said Eggan, who pioneered the disease-in-a-dish concept.

Sophie De Boer, a graduate student in Eggan’s lab, is the first author on the paper.

This latest finding is expected to push toward clinical studies the second major ALS discovery from Eggan’s lab in less than a year. The HSCI stem cell biologist, along with his neuroscience and neurology collaborators at Massachusetts General Hospital and Boston Children’s Hospital, are preparing for a phase I clinical trial of a medication, already approved for treating epilepsy, which Eggan and colleagues discovered quiets disease related electrical excitability in the motor neurons affected in ALS.

In a paper in 2007, Eggan and colleagues demonstrated that glial cells, which are in the background in the nervous system, were involved in motor neuron degeneration in a mouse model of ALS. The following year, the researchers reported that the same thing was happening in human motor neurons made from patient stem cells, and they proposed that prostanoid molecules, a group of substances involved in inflammation in everything from pain to pregnancy, might be playing a role in the glial cells.

The work, which was first done in human motor neurons in a dish and then in a mouse model of ALS, “says that indeed this stem cell model was predictive of something that can happen inside a whole animal, and it’s important because it demonstrates that this is really an important target for an ALS therapeutic. If we can inhibit this receptor in an ALS patient, we might slow down the progression of the disease, and that would be a huge step,” Eggan said.

“One feature of the glial cells in ALS that attack motor neurons is that they have higher expression of this prostanoid receptor. Removing just one of the two copies of the receptor in the glial cells had an effect on extending the lifespan” of the ALS mice, he added. “Inhibition by a drug is unlikely to have an effect as complete as a knockout in the mice.”

Eggan said that experiments on human stem cell-generated ALS motor neurons also show that “if we inhibit that receptor in the ALS cells with a chemical, those cells lose their toxicity to motor neurons.”

“This is a very exciting period for those whose lives are threatened by ALS, and it is exciting for my lab,” Eggan said. “First, we recently identified a pathway that we think is important for degeneration inside the motor neuron, and now we’ve found this pathway in cells outside the motor neuron. This has potential to have a very substantial effect on what’s happening in ALS.”

The research was funded by Project ALS, the New York Stem Cell Foundation, P2ALS, and the Howard Hughes Medical Institute.