Of books, trees, and knowledge 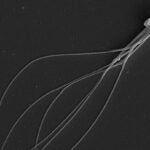 Arnold Arboretum library has them all, making a unique draw for scholars worldwide

To Ling Guo, a curator for the Beijing Botanic Garden, one of the best places to learn about Chinese crab apples is half a world away, in Harvard’s Arnold Arboretum Horticultural Library.

Guo was wrapping up two months at the Arboretum as a visiting scientist and a recipient of the Jewett Prize, which supports researchers studying flowers and fruits.

Guo, one of the world’s foremost experts on crab apples, has been creating an updated checklist of all the world’s varieties for use by her home institution as it takes over the rotating role managing the international crab apple registry, which helps monitor and assign names for new varieties.

“Here, we say, is the crab apple’s motherland,” Guo said. “That is why I have come to make my checklist. They have a huge collection of books, even back more than 200 years. It’s really amazing.”

Monographs on crab apples are just a tiny portion of the Arboretum’s library, according to Head of the Library and Archives Lisa Pearson. Occupying the third floor of the Arboretum’s Hunnewell Building, the library and companion archives contain 40,000 volumes, covering topics including plant and garden history, plant disease, landscape design, soil science, and dendrology. The collection includes biographies of important figures in botany, the papers of Harvard scientists, the records of Arboretum plantings, as well as copies of botanical journals, monographs, and other scholarly works. In addition, 60,000 more Arboretum volumes are currently held in the larger Harvard University Botany Libraries in Cambridge.

Among the library’s most prized holdings are 47,000 photographs. Many are on glass plates, portraying a visual record of exploratory expeditions to China that were begun by famed plant explorer Ernest H. Wilson. There are other photos from around the world. The earliest photos, Pearson said, date to about1885, shortly after the Arboretum’s founding, and show the Arboretum itself more than a century ago.

Arboretum Director William (Ned) Friedman, the Arnold Professor of Organismic and Evolutionary Biology, said that the Arboretum’s photographic archives are an important resource, valuable for botanical, horticultural, ethnographic, and environmental scholars, and that the library itself, though an important resource for modern scholars, looks much as it did in the decades after the Arboretum’s founding.

“These extraordinary images of China, Korea, and Japan, taken by a series of intrepid Arboretum plant explorers a century ago, document not only the amazing plants of Asia but also the landscape, diversity of cultures, and architecture,” Friedman said. “And standing in the library, which is much as it was when Charles Sprague Sargent presided over the founding and first 50 years of the Arnold Arboretum, is to be transported back in time.”

To Pearson, who was appointed head librarian last year after starting there as an intern from Simmons College in 2001, an Arboretum gem is its rare books. Her favorite is a large 18th-century copy of Mark Catesby’s “The Natural History of Carolina, Florida, and the Bahama Islands,” which describes, in words and colorful plates, plants and associated insects and birds.

“The library is a place of learning, not only for the staff and researchers, but for me, too,” Pearson said. “I literally learn something new every day, and if I can then put that knowledge to work to teach the history of the Arboretum, or of plant exploration, or help a staff member locate an obscure fact in the archives, I think I have done a good day’s work.”

To scholars around the world, one of the library’s major strengths is the fact that its holdings reflect the living collections outside its walls, planted on the Arboretum’s grounds.

The Arboretum itself is a 281-acre, living museum of botanical specimens that doubles as a public park. Designed by Sargent and Frederick Law Olmsted, and operated in partnership with the city of Boston, the Arboretum is a National Historic Landmark whose diverse plantings of trees, shrubs, and vines contain a heavy representation of both North American and temperate Asian species.

Scholars interested in particular species or groups of species — such as crab apples — can find historical and scientific information in the library, archives, and the herbarium, and then walk outside and examine living specimens, a combination that has exerted a powerful pull for at least a century, Pearson said.

“One Chinese scholar who was here in 1915 said in a newspaper interview that it’s much easier to come and do research at the Arnold Arboretum, where Chinese plants were growing and where the herbarium was complete,” Pearson said. “He said it would take him years and years to see all of the different Chinese plants he would want to see in his country.”

The Arnold Arboretum has posted its fall schedule of activities, including a guided tour of the Arboretum’s landscape at 10:30 a.m., Aug. 30.