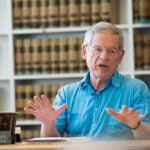 Harvard expert explores what the international community can do

Israel carried out more airstrikes in Gaza on Wednesday as the military and political conflict between Israel and Hamas intensified.

Stephen M. Walt, the Robert and Renee Belfer Professor of International Affairs at the Harvard Kennedy School (HKS), discusses the factors behind this latest outbreak of violence between the sides, and what the international community can do about it.

HKS: What prompted this latest escalation in violence?

WALT: The proximate cause was the kidnapping and murder of three young Israelis on the West Bank, followed by the seizure and murder of a Palestinian teenager. But the background causes are just as important: the increasing radicalization on both sides of the conflict, the collapse of the peace process and the “two-state” paradigm, and the failure of Israeli, Palestinian, and U.S. political leaders.

HKS: What is the current state of political relations between Israelis and Palestinians, and how much has changed since the collapse of the American-led peace talks?

WALT: As U.S. Middle East envoy Martin Indyk recently acknowledged, there is pervasive mistrust on both sides, which is hardly surprising. The Palestinians believe — with considerable justification — that the current Israeli government is more interested in colonizing the West Bank and completing the creation of “greater Israel” than it is in making peace or permitting the establishment of a viable Palestinian state. The Israeli leadership believes — with somewhat less justification — that their Palestinian counterparts secretly hope to reverse Israel’s creation and replace it with a state of their own. At this stage, there is little trust or good will on either side.

HKS: What can and should the international community be doing right now to diffuse tensions?

WALT: Unfortunately, the international community has rarely been willing to take bold action to end the seemingly endless cycle of violence. The United States and European Union have considerable leverage over both sides, but neither group has been willing to use its influence constructively. Halting the present violence will save lives in the short-term and would therefore be desirable, but only a genuine peace agreement will prevent it from breaking out again at a later date.

HKS: What would be the possible repercussions from a ground invasion by the Israelis?

WALT: A ground invasion would cause additional deaths and great human suffering, but it will not eliminate Hamas or end the Palestinians’ desire for a state of their own. It would be a one-sided event that would further tarnish Israel’s deteriorating image, including its support here in the United States. The past three U.S. presidents have all understood that a two-state agreement was in Israel’s long-term interest, and it is deeply regrettable that they have been either unable or unwilling to use U.S. influence to achieve that goal.